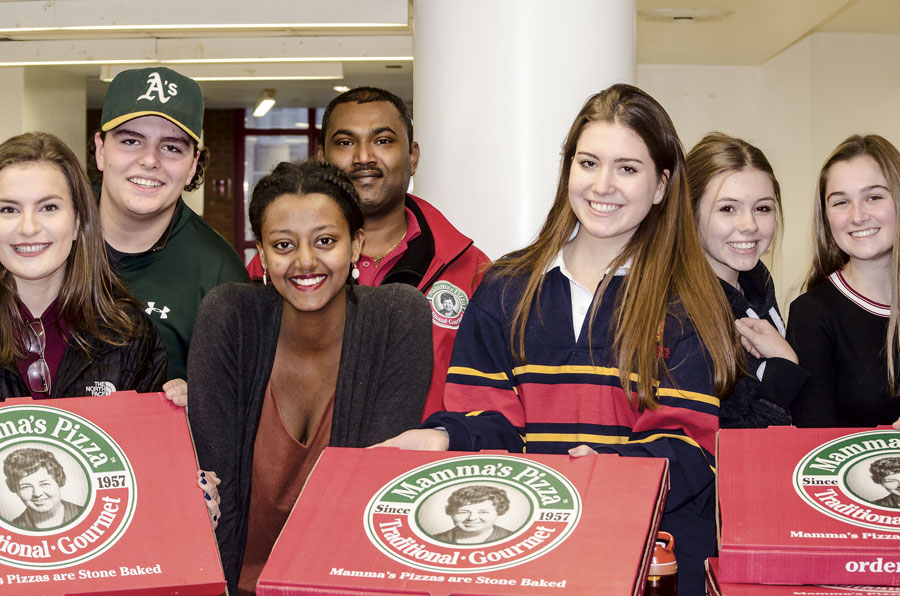 What began as a comedic push to win the title of student council president ultimately turned into a heartfelt and honoured tradition at Malvern Collegiate Institute that is now in its sixth year.

The “Rizza Pizza” event at Malvern C.I. is a holiday favourite amongst the students, staff and two lucky families at Community Centre 55 – a community-based organization that connects people to the programs and services that will help them thrive.

Nancy O’Brien, a teacher at Malvern C.I. explained that the event began when former student, Anthony Rizza was running for student council. During his campaign, he thought it would be funny to hold an event using pizza (which coincidentally rhymed with his name) in order to gain the attention and votes of his classmates. Thus, the Rizza Pizza event was born.

Rizza won the title of Vice President that year and subsequently the year after, but ended up leaving even more of a legacy in the form of his event.

And it didn’t end when he graduated. O’Brien said that “his sister Daniella [also] served on student council all four years [she was at Malvern C.I.], acting as president in her final year.”

This is the first year Malvern C.I. has been without a Rizza but on December 8, the school’s student council which includes Claire Lawrence, Roya Shidfar, Ben Loughton, Peri Bergevin, Morgan Clark-Crapper, Lily McDonald, Haseat Amare, Emma Harvey-Hurst, Jackie Kinney, Ben Robinson, and Sydney Clayton, proved that would not stop them from continuing the annual fundraiser.

Traditionally, Mamma’s Pizza on Queen Street East has provided the food for the event at cost, but this year decided to donate all of the pizzas as a contribution to the effort.

It didn’t take long for the students to catch a whiff of the delectable cheesy goodness wafting through the halls. A mass of students poured into the cafeteria shortly after 11:30 a.m., eagerly awaiting their delicious lunch while clutching their donation money. The pizza was so popular that according to O’Brien “about 125 students came by and [they] sold out by 12 p.m.”

With bellies as full as their hearts, the student council carefully calculated the money from the lunch rush, counting more than $500.00 raised for a family at Centre 55.

“As a school, we will support two families…so this alone will cover one,” said O’Brien.

She continued to explain that last year the school contributed “gift cards for groceries, as well as Visa gift cards so the families can purchase what they have on their list.”

It was a satisfying meal but an even more satisfying endeavour sure to brighten the holidays of families in need.

“Tis the season,” said O’Brien. “Yes, it feels good. And it’s a great lesson for the students to learn to give.”