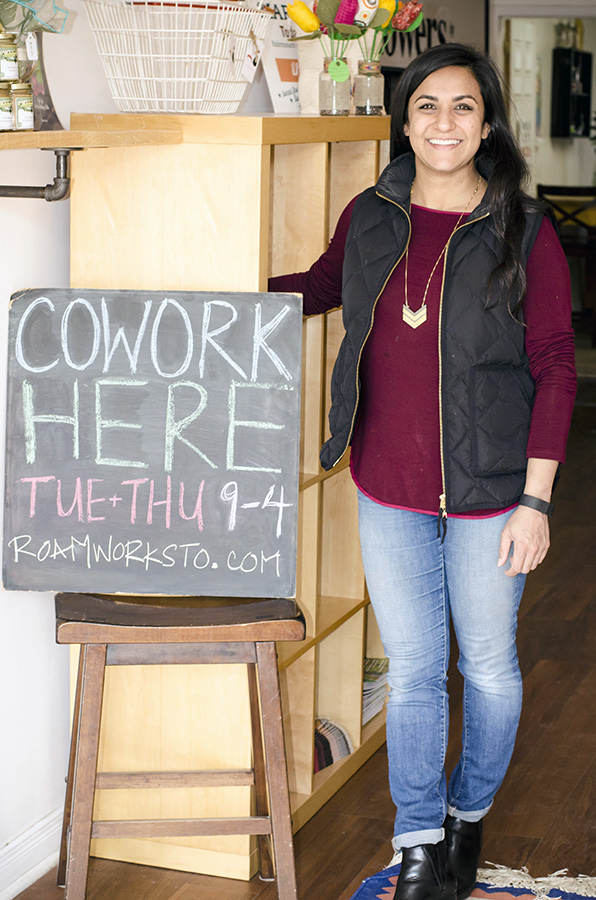 You may have noticed that the term “coworking space” has been popping into Toronto’s lexicon, with more and more of these spaces are popping up around Toronto. With a rise in freelance workers and entrepreneurs alike, the city has taken on the task of providing these workers with spaces to escape the monotony of their living room and collaborate with like-minded individuals.

Until recently though, the East End had been largely void of coworking spaces — an issue Razili Datta noticed when she first moved to Leslieville from her home in California four years ago.

Datta had been working for an international development organization in San Francisco when she and her family made the decision to come to Canada. Although her employer allowed her the freedom to work from home, without a network of friends or family she found it lonely.

On top of that, she had yet to experience a Canadian winter and “didn’t have experience with the whole hibernation thing that happens from January to March, so it was particularly rough,” she said.

With Datta’s son being one at the time, she decided it would be great to have a space that would allow both she and her son the ability to interact with other people.

“I thought about, oh wouldn’t it be great to have a coworking space that would be family friendly and kind of support the variety of needs that we have as people who are no longer necessarily falling into the traditional sort of nine to five kind of work schedule,” she recalled.

And thus, the idea of Roamworks TO was born. The name, she explained, refers to “a space for people who are generally roamers in terms of how they work. So small business owners or any kind of freelancers, entrepreneurs who are starting up small businesses.”

Datta is obviously onto something with this concept. According to an article in Business Insider, Microsoft announced at the beginning of the month that they’ll be providing WeWork memberships — WeWork is a shared workspace company — to nearly 30 per cent of their New York office. The hope is that this will not only provide their employees greater flexibility in the way they work, but will also encourage collaboration and “creative collisions” with the startups who tend to frequent coworking spaces.

“There’s no shortage of people who could potentially benefit from this,” said Datta. “Even our core people, there have been people who have connected with each other to collaborate…you know, similar industries they end up working together and collaborate on doing a project together. There’s been one person who’s in communications and another who needed help on their website and … she hired her to help her with her website.”

Datta explained that although there are many different types of coworking spaces from general to executive, she wants hers to have more of a community-based vibe.

“There’s also this other category that’s much more focused on community and comfort and sort of grows organically out of the community. So that’s what I’ve been trying to achieve because, you know, when you have a very corporate environment a lot of the people who are doing this sort of work are trying to get away from that corporate feeling, and so it’s nice to be able to respond to that as well,” she said.

And this particular pop-up comes with an added bonus of not only community and comfort, but access to good food as well.

“One of the core members of this group is a chef…she’s a vegan chef and she comes in and cooks here and uses this space. One of the things we’ll do is that [she] will prepare food and then everybody chips in five dollars or whatever it takes to cover the costs and come and sit down and eat together,” she said.

“That idea of shared space, food, community coming together around a table. That’s the feeling we have.”

The pop-up coworking space will be located at 1322B Gerrard St.E. until the holiday season. It is open Tuesday and Thursday from 9am-4pm and the cost is $15 per day. Packages are also available for purchase.