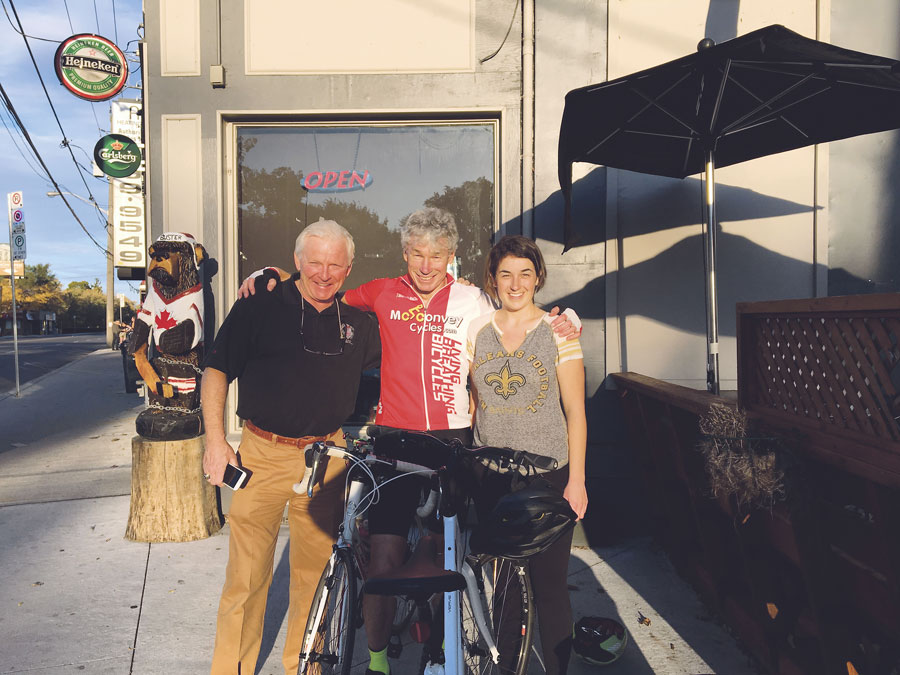 Former Beach resident, Daniel McConvey knows home is where the heart is. So much so that he decided to ride his bike from his home in Brooklyn Heights, New Jersey to his former home here in the Beach.

McConvey, who now owns a small hedge fund in New York City, said this ride had been on his bucket list for years.

“It kept getting delayed,” he said. “So we finally did it. I’ve always wanted to do a destination bike ride. I like the idea and so yeah, coming back to where I’m from is part of [it]. Just an excuse to do something a little crazy.”

Crazy to some, an irresistible adventure to McConvey. But knowing the terrain that lay ahead of him on the journey, his wife Lori insisted he hire some help to get through the first leg.

“The first half is the tough part. There’s a lot of hills in Western New Jersey and Pennsylvania and southern New York state, so I hired some help to come with me to Watkins Glen. It’s a little racing town at the bottom of Lake Seneca. It’s roughly halfway,” he explained.

And it turned out, his wife was right. McConvey finished the first half of the journey in only four days – but the difficulty of it was certainly not lost on him.

“It was about a 65-70 mile average each day for four days through the hills. And those were tough, because we had a lot of wind against us and a lot of hills, but once we got to Watkins Glen we basically took it easy and enjoyed it,” said McConvey.

He continued to explain that around Rochester, just north of the Finger Lakes, the terrain flattens out making it a much easier and more pleasant ride from there.

It was in Rochester that his wife and daughter met him. Clearly taking after her father, his daughter Michelle decided to get in on the action and “[went] most of the way, almost all the way since Rochester,” he said.

While the bike ride itself was undoubtedly a challenge, McConvey joked that they were hardly roughing it during their journey.

“We’ve been staying in hotels, haven’t been roughing it and camping. We stayed over at the old Angel Inn in Niagara on the Lake the night before last. So that was the extent of roughing it basically,” he said, laughing.

But all good things must come to an end, and so, after a celebratory beer at Buster’s by the Bluffs, it was back to New Jersey the next day. Chuckling, McConvey added, “I gotta get back and do some work.”