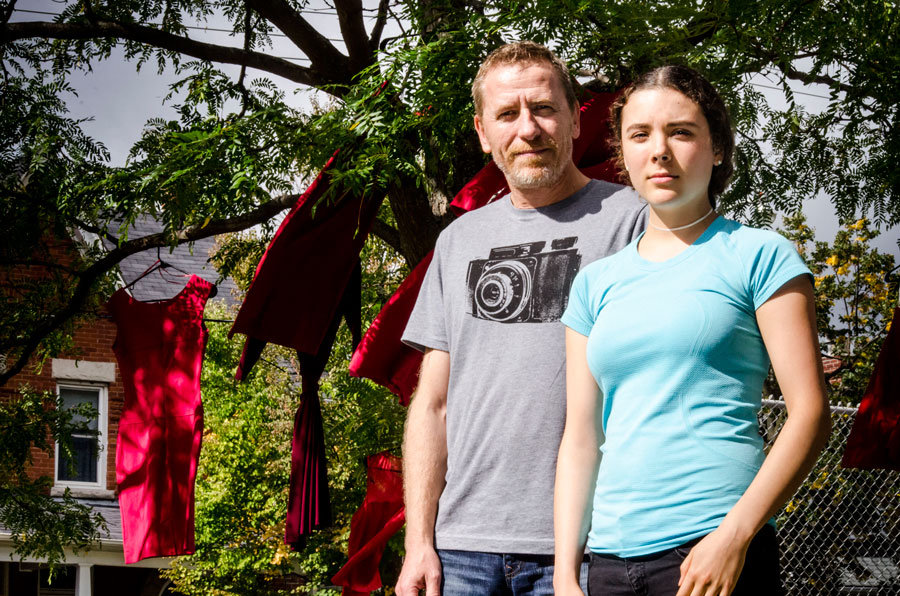 Swaying delicately in the wind, 30 red dresses hung from the trees outside the historic red brick walls of Malvern Collegiate Institute – their vibrant skirts rocking slowly back and forth, cascading across the sky as if they were painting a picture.

And in a way, they were. Those dresses represented all that is left of a loved one. The empty shell of a mother, a sister, a friend who vanished without a trace.

With bright sunshine and an unseasonably warm breeze, October 4 was a particularly beautiful day. But the project itself, Red Dress Day, led by teacher Sean Matthews, was a somber reminder of the more than 1,200 missing and murdered Indigenous women in Canada. It may have been a simple art installation, but it stood to represent a complex social matter that has quietly plagued a nation for years.

“I feel it’s kind of my responsibility in general but more specifically through this course to bring it to students attention,” Matthews said of the initiative, which is in its first year at Malvern.

Inspired by artist Jaime Black’s REDress Project which she started in 2004 to bring awareness to the missing and murdered Aboriginal women in Canada, Matthews decided he needed to educate his students about the issue by getting them personally involved in the project.

As part of the Canada-wide day of action, students were asked to bring dresses to school, the Grade nine students in Matthews class then hung the dresses from the trees in front of Malvern Collegiate Institute.

The Expressions in Aboriginal Cultures course Matthews teaches is “essentially an art course,” he said, “but what we’re doing is we’re looking at all sorts of ideas that spring out of First Nations, Inuit and Metis cultures across Canada. So some of them are celebratory….but some of them are also social.”

According to the Native Women’s Association of Canada (NWAC), between the year 2000 and 2008, Aboriginal women represented 10 per cent of all female homicides in Canada. This statistic becomes even more alarming when you consider the fact that Aboriginal women make up only three per cent of the population.

The NWAC further states that more than half of the homicide cases were women and girls under the age of 31, and nearly half of the cases remain unsolved.

“This is not just a trivial thing,” said Matthews. “These [dresses] are representations of women who are no longer with us. And some of them are children. One dress I brought in here from my daughter when she was six. And in the display I have in my display cabinet there’s kids as young as two, three years old that have been murdered. Girls, in particular. So it’s a very pressing issue.”

An issue which, after years of pressure by First Nations and other activists, has increasingly become part of the national conversation. The Liberals are in the process of launching an inquiry into missing and murdered Indigenous women. But many are still unaware.

“When you’re hearing it on the announcements you’ll see in a class of 30 students a few of them will look up and recognize that, like they’ve heard about it. But the vast majority don’t know what’s happening and they don’t know what it’s about,” said Malvern student Isabelle McEwan.

Turning to the red dresses hanging from the trees, McEwan continued, “One missing woman is unbearable but more than 1,200, that’s unthinkable….how can something like this be going on without there being mass upheaval and unrest [about] these issues?”

An attitude like McEwan’s is exactly what Matthews was hoping to foster when he signed up for the project.

Though it was only a one day project, the hope “is people stop, they do a double take and they question, you know, and the more we question the more we find answers,” said Matthews.