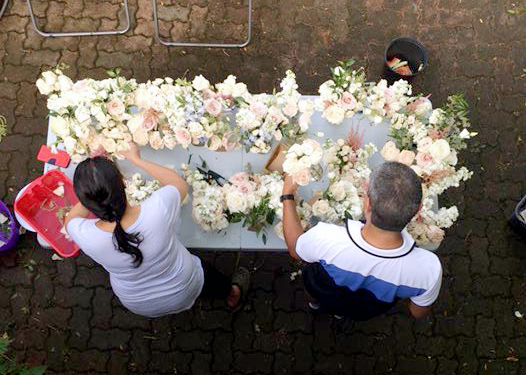 It’s been nearly a year since former Beach resident Cris Okihiro and her husband Randy began bringing flowers to seniors’ homes around the city.

The couple started the initiative shortly after Cris’s father-in-law passed away four years ago at the age of 100. They visited him regularly when he was a resident at Castleview nursing home, and began to get to know some of the other residents, many of whom were his neighbours.

The Okihiro’s could have walked away after the death of their father. Without any direct connection to the nursing home, there wasn’t necessarily a reason to return. But the couple didn’t want to walk away.

Instead, they came up with the idea to deliver flowers to their father-in-law’s neighbours in an effort “to get the sunshine in,” said Cris.

“Everybody knew my husband. He was going there three to four times a week. [So] at Christmas we just said, let’s just bring flowers to the seniors,” said Cris.

Their initiative has now grown to include regular visits to the homes, most of which are documented on her blog http://nestingfinds.blogspot.ca/.

Cris and her husband collect mason jars that have been donated and fill them with flowers that have been donated by brides from their recent wedding or provided at a discount by flower shops such as Cool Green and Shady on Kingston Road. The pair then personally drop the arrangements off at the senior homes, spending time visiting and chatting with each person in the hopes that the combination of company and flowers will brighten up someone’s day.

While many of the residents do have family and friends who visit, “there are a lot of people in the gaps. Those are the people we’re after,” said Cris.

There’s no question that the Okihiro’s are passionate about their cause and the people with whom they’ve built close relationships.

Giggling, she added, “There’s always the snooty lady who say they don’t want to pay. And then I tell them, ‘No but this is for you. We brought this just because you’re you.’ And that lightbulb moment is unbelievable.”

It’s not always an easy road though.

And though it’s only been a year since they started, Cris said she sees no end in sight.

“One of our goals in life is to learn. We’re just trying to be better versions of ourselves,” she said. “I see us doing this to the end of our lives.”

Just beautiful and an inspiration! God bless you!