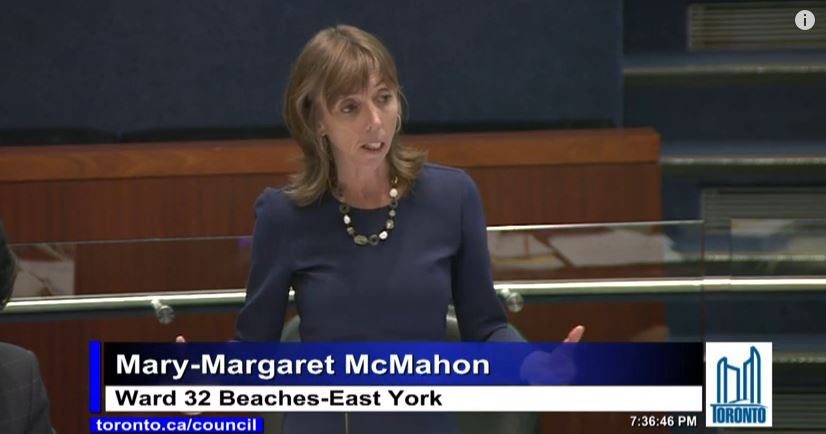 Cara will officially take over the lease of the premises containing the Lakeshore Boulevard building’s Athens Cafe, Tim Horton’s and Carter’s Landing, as well as the Pizza Pizza to the west. It will then sublease the Athens Cafe and Tim Horton’s back to Tuggs. Tuggs will continue to maintain its exclusive lease to sponsorship and food and beverage rights on the eastern beach properties.

But council also voted to take a closer look at that exclusive lease to those park properties, voting 33-2 in favour of a motion by Ward 32 councillor Mary-Margaret McMahon that called for the city to discuss with Tuggs the feasibility of acquiring the remaining terms of the agreement, which runs until 2028.

This motion “is to enter into conversations with Tuggs Inc. to reclaim our parklands,” said McMahon at the Wednesday meeting.

If negotiations are successful, this would mean Tuggs would no longer have sponsorship rights for the area that includes Woodbine Beach, Ashbridges Bay, and Kew Gardens.

“We have many events as you can imagine down in the Beach, especially in the summertime, and now in the wintertime,” she said. “These groups have tried to run events in the park and it’s just been clouded up in red tape and many obstacles. It’s not fair to the community, it’s not fair to these charitable groups.”

McMahon said the park rights allotted to Tuggs are more extensive than the rights given to other companies operating on Toronto park lands like Toronto Island and High Park.

Tuggs’ 20-year lease to the properties, and how the city assigned that lease in 2007, has long been a cause of contention for many Beach residents. But when Carter’s Landing opened in July — and Tuggs asked for the lease reassignment from the city — an organized opposition began to take shape.

Many against the Tuggs deal maintain that Tuggs was in breach of its lease agreement by subleasing to Cara. However, Toronto city staff noted the original lease document did allow George Foulidis, Tuggs’ owner, to temporarily lease the space to another party.

The “Free the Beach” group circulated a petition and email drive — with Ward 39 Scarborough-Agincourt councillor Jim Karygiannis, who voted for the reassignment, lamenting the 1,028 emails he received on the subject.

“We got 1,028 emails on this subject alone,” said Karygiannis. “That was locally driven. Locally driven. For what? For us to change our mind. Just because somebody down there didn’t like it. Well guess what? We are in an agreement.”

Some councillors expressed worry that the city could be sued if they did not reassign the lease.

Speaking earlier, McMahon noted the numerous times the city has been in court with Tuggs.

“This is the best location in the city of Toronto for a restaurant. I don’t know how a good business operator could not run a good business,” she said. “When you spend so much time in court, taking the city to court, maybe that’s why.”

Council met in camera for a portion of the meeting, and later voted 26-9 to keep a supplementary report on the issue confidential.

Council is to report back to the Government Management Committee on the results of the discussions by the first quarter of 2017.