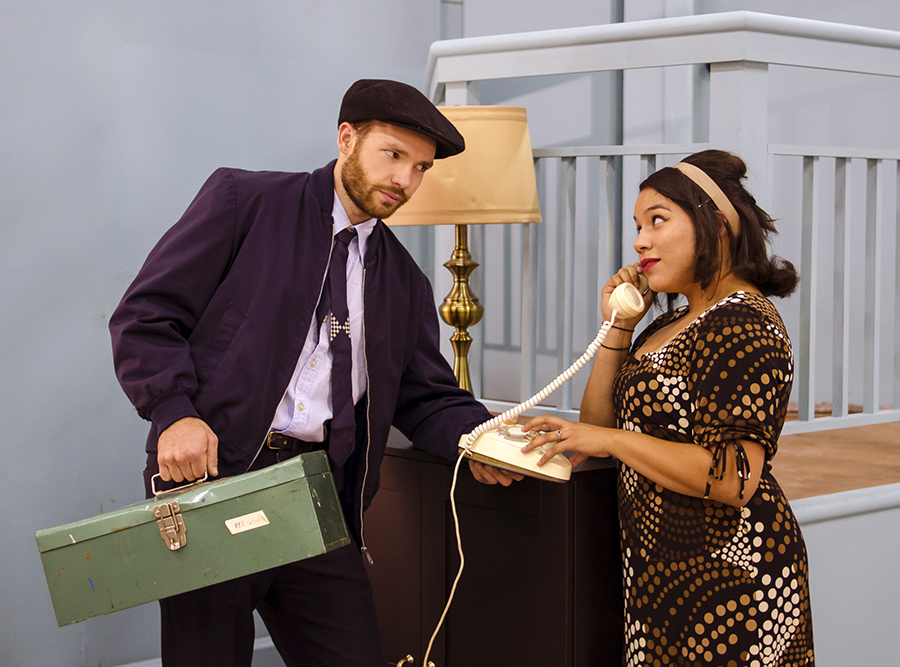 Now in their 58th season, the Scarborough Players’ fall season opens October 7 with Neil Simon’s Barefoot in the Park, directed by Vivian Hisey.

“Paul, if the honeymoon doesn’t work out, let’s not get divorced, let’s kill each other,” croons Corie, played by Jane Fonda, to her new husband, played by Robert Redford, in the theatrical trailer for the 1967 screen adaptation of the hit Broadway play – foreshadowing funny moments of tumultuousness to come.

In this mounting of a classic comedy, Tamara Freeman plays the role of free-spirited Corie, opposite to Will van der Zyl’s straight-laced Paul. The pair, alongside a cast of eccentric supporting characters (Erin Jones, Rob Schock, Lyndon Johnson, Anthony Jones), test the limits of their young marriage – and, of course, hilarity ensues.

Barefoot in the Park runs October 7 through October 22, with an opening night wine and cheese reception October 7 and an audience talk back October 20. The Scarborough Village Theatre is located at 3600 Kingston Road (at Markham Road). Parking is free, the location is wheelchair accessible, and seats are reserved. For more information, call the box office at 416-267-9292 or visit www.theatrescarborough.com.

Beach resident Melissa Paulson takes audiences back to 1983 with her celebrated one woman show, For the Love of Pie.

Paulson is Georgia Peach, an over-the-top, career-obsessed cooking show host looking to dazzle her new producers – but she soon finds that her quest isn’t as easy as… ahem, pie.

Beach United Church kicks off its new Music for the Soul concert series with an enticing ticket: singer-songwriter – and deft instrumentalist – Lora Bidner along with cello and vocal duo The Visit.

Bidner, proficient in piano, guitar, ukulele and hang drum, has seen her star rise over the last year, receiving critical acclaim for her 2015 album To The North and winning the first prize SOCAN Canadian Young Audio-Visual Composers Award for her work composing the original score for the animation short, Stephanie Chewy’s Missing.

“To The North touches on themes of human pathos, self-discovery and folklore,” reads her bio. “And includes styles of music from atmospheric haunt-folk in the vein of Fever Ray to electronic-pop in the vein of Florence and the Machine.”

And while her melodic voice carries hints of Tori Amos or Fiona Apple, watching her performances on YouTube  Bidner has a captivating style that’s all her own. At once intimate, commanding, raw and polished, she’s the real deal.

Bidner shares the stage with The Visit, “a musical dialogue that transcends genres and idioms.”

Compelling and immersive, The Visit is cellist Raphael Weinroth-Browne and vocalist Heather Sita Black. The duo has garnered international praise for their debut album Through Darkness Into Light, a haunting 55 minute journey and musical accomplishment that contains middle eastern influences, contemporary classical, folk, and even a hint of metal. “With a rare combination of virtuosity, emotional intensity, and genre-defying innovation, The Visit is making their mark on the international stage,” reads their bio.