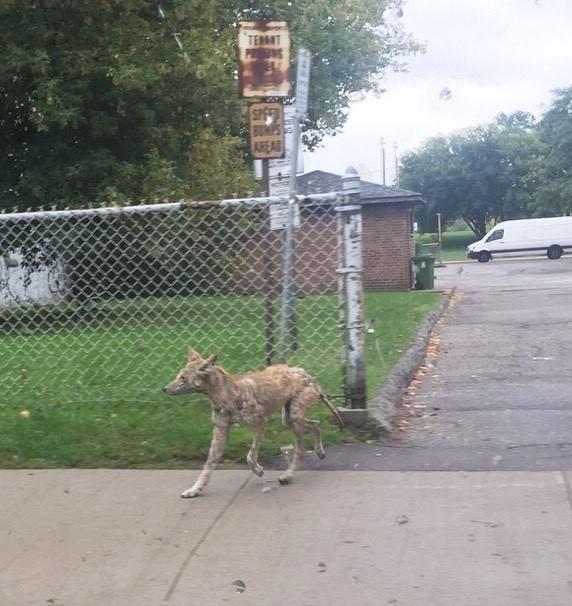 With a number of family pets missing and others returning home injured and spooked, Beach residents are fearing for the safety of their pets — especially after hearing reports that a coyote recently attacked one dog, and ran away with another.

The incident, which took place in the early hours of September 27 according to local social media groups, has some commenting that it is oddly reminiscent of the string of attacks which took place three years ago, and before that in 2009, when a chihuahua was taken from a backyard. Photographs and descriptions of coyote sightings have increased in online groups throughout the week, with many sharing their — often not so positive — animal encounters.

Beach resident Sarah Neale told Beach Metro News that both of her cats went missing from their Balsam Avenue home the previous Friday.

Only one returned home, scared and scarred.

The missing cat “is not a wandering little cat at all. She doesn’t go far from home,” said Neale of her three-year-old apricot tabby ‘Beatrice’.

She soon learned of the coyote through a neighbour. Her husband had seen it at the top of the street a few weeks prior. It was at that moment she feared the worst.

“We have a pathway beside our neighbors’ house that’s just there, we don’t use it, they don’t use it. And I went down the path [searching for the cat] and there was half a pile of squirrel tail there. And I showed [my husband] and I thought it was scat and he said, ‘No that’s vomit. An animal has vomited there.’ There were bits of acorn and fur. So that made me feel that an animal was there,” she said.

Coyote encounters have been an increasing problem in urban centres over the years due to a decrease in land and resources, in addition to a dwindling fear of humans. And while this is an unsettling fact for many, learning to coexist with urban wildlife is a reality urban dwellers must face.

Especially because many studies show removing them is not a viable option. Due to their territorial nature, it has been found to be both expensive and ineffective.

According to the Humane Society, even if the neighbourhood’s current coyotes are removed, it is typically only a short period of time before a new pack moves into the area. In addition to this, traps set for coyotes can pose even more of a threat to family pets than the coyotes themselves.

While the recent string of attacks has residents fearful, a study of 1,400 coyotes conducted by the Urban Coyote Research Program showed it is rare that coyotes prey on family pets. “The most common food items were small rodents (42 per cent), fruit (23 per cent), deer (22 per cent), and rabbit (18 per cent),” they said.

The study showed only about two per cent of the coyotes ate human garbage or compost, and only 1.3 per cent had eaten cats.

However, coyotes that have become overly habituated in an urban setting do show a tendency to prey on feral and domestic cats, as well as small dogs.

That is why staying vigilant and informed is essential.

“Toronto residents who live near ravines and forests – typical coyote habitat – need to be particularly vigilant with their pets,” said Tammy Robbinson, a worker at Toronto Animal Services. “Toronto Animal Services hand-delivers coyote awareness information to coyote-prone neighbourhoods across the city. Last week 140 information packages were delivered to residents in the area of Neville Park to educate them about coyotes and what to do to avoid conflicts.”

According to the Toronto Region Conservation Authority (TRCA), if you do encounter a coyote, do not run. This will trigger its instinct to prey. Be as big, loud and assertive as possible. Wave your arms, make noise, stomp your feet, or flash a light in its face. If you are walking a small dog, pick it up. Stand your ground until the coyote has moved away.

“If people see a coyote, they should be cautious [but] one of the tricks I always tell people is if you’re seeing coyotes in your area, bring a water bottle and fill it up halfway. If you see it, throw it at him. You don’t want to hit the animal, it’s just a scare tactic. Nine times out of 10 it’ll scare them away,” said Gord MacPherson of the TRCA.

“The number one thing to do if you have a small dog,” said MacPherson, “don’t let it off-leash. If your dog is off-leash it’s like a chocolate bar to a coyote.”

Additionally, avoid walking dogs around sunrise or sunset. Urban coyotes tend to be nocturnal and are therefore more active during these times.

Remove bird feeders, compost piles, and pet food from outside, and keep garbage safely stored in a garage (when possible). These items attract coyotes and could be a root cause of their visits to the community.

Toronto Wildlife Centre is attempting to track the coyote and is asking for the help of the public in reporting sightings to them.