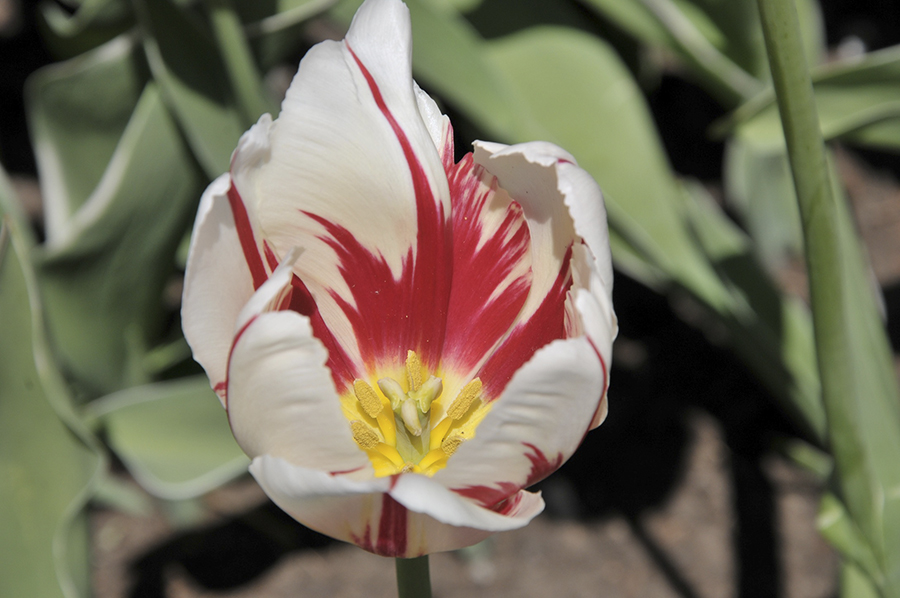 This year, though, there’s something new and fun for Canadian gardeners to indulge in. It’s the Canada 150 tulip, chosen by the federal National Capital Commission in Ottawa to mark Canada’s 150th birthday. (“Sesquicentennial” is the formal, tongue-tangling term.)

The sesqui tulip happens to be my favourite kind, a “flamed” bicolour flower. It’s mostly white, with jagged red streaks that run from the base of the petals to the tip. Red and white… the colours of our flag… nice, eh?

But look down into the cup of this pretty blossom for a surprise. The flames join together to form the shapes of elongated red maple leaves. With a little imagination, you can see maple leaves all around the outside of the cup, too.

Side note: Tulips with this streaked “flamed” colouring are also often called Rembrandt tulips, because they appear frequently in the Dutch master’s paintings.

They come in all kinds of colours – red-and-yellow and white-and-purple are common combos.

A part of Canadian history

Everyone probably knows the story of Canada’s ties with the Netherlands and tulips, but just in case, here’s a short version. During World War II, when Nazi Germany invaded Holland, the younger members of the Royal Family fled to safety in Canada. During their exile, their daughter, Princess Margriet, was born in Ottawa. A hospital maternity ward there was temporarily declared to be Dutch territory so the baby could, technically, be born in her home country.

The link between the two nations was made even stronger when Canadian soldiers liberated Holland from enemy occupation at the closing of the war.

In thanks, the Netherlands’ Queen Wilhelmina sent Canada 100,000 tulip bulbs that were planted in Ottawa. Each year, that friendship is marked by an additional 20,000 tulip bulbs sent here by the Dutch Royal Family and the Dutch Growers Association. An annual Tulip Festival is held in Ottawa, when the capital goes berserk with flowers, fireworks and festivities (May 12–22 in 2017). This year’s festival will see 300,000 Canada 150 tulips added throughout the Capital Region.

Where to buy the bulbs

You can have your own Canada 150 celebration next spring. Home Hardware has been chosen as the sole supplier of this named variety, available in boxes of 25 or 100. As I write this, many Toronto stores have already sold out.

“People were pre-ordering when the tulips were first announced,” said Trish Owen at Home Hardware’s head office in St. Jacob’s, ON. “There’s been a great deal of interest, and many community groups are interested in them for local projects.” In such situations, she added, bulk shipments of 500 bulbs can be ordered through local retailers.

Last I heard, our neighbourhood store at 2305 Queen St. East and MacLean had a good supply, but that may have changed by the time you read this. Owen assured me that more bulbs are on the way. Shipments are expected to arrive in late September or early October. “I encourage everyone to stay in touch with your local store to find out the time of arrival,” she added.

Of course, if you miss out, there are plenty of red and white tulips that you can plant. You can even find red-and-white flamed tulips in catalogs and garden centres. Are they the same flower? I don’t know, but if you want the official sesqui tulip, it’s only sold under the red HH sign.

Tulips are easy to grow. Next spring’s flower is already packed inside the bulb with everything it needs to bloom. Just dig a hole that’s at least three times as deep as the bulb is tall – at least 8 inches/20 cm for squirrel protection. Plant the bulb pointed end up and make sure to water the area through any autumn dry spells. In smaller gardens, plant five bulbs spaced about 3 inches/8cm apart in each hole to get lush, full clumps of flowers.

Mary Fran McQuade is a freelance writer and editor with a special interest in gardening, in the Beach and elsewhere.