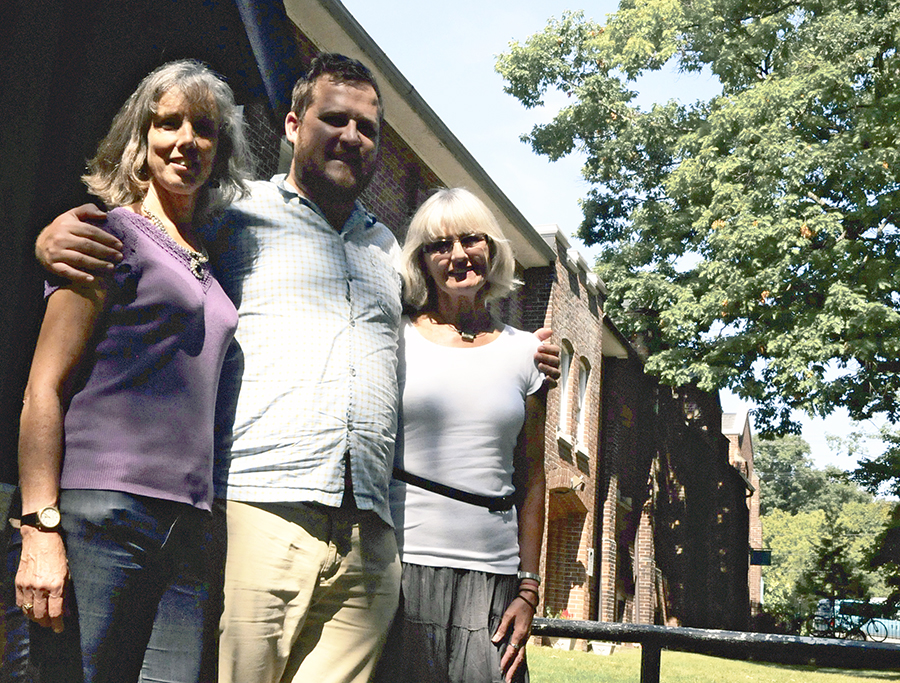 Earlier this year during a spring church service at St. Aidan’s, clergy Matt Adams noticed parishioner Virginia Wilson in the pews. She looked like she was in pain.

Concerned, he approached her and said as much, to which she replied, “It’s depression.”

“Wait for me after the service,” he said.

Wilson did, grateful that she had someone to talk to about what had been going in her life, mental health-wise, over the last few months. This wasn’t the first time she’d experienced depression – she was diagnosed in her late-20’s – but this recent bout had her in hospital and, like times before, was affecting every aspect of her being.

“I had a sense it might be depression because I was diagnosed with bipolar when I was 20,” said Adams, who has been a priest at St. Aidan’s since 2014. “So I said stick around, and we talked, and I shared a bit of my story. I was able to give her some solace, start a relationship.”

“I was so grateful,” said Wilson.

Through sharing their stories and growing their relationship, it became apparent that this type of frank discussion about mental health could benefit not only the church community, but the Beach community at large.

Adams mentioned to St. Aidan’s head priest Lucy Reid that the church could develop programming to help alleviate the stigma around mental health and provide a community forum for resources and support. She believed in the idea, wholeheartedly.

“I’ve been here for five years, and I’m aware of families in the church who have a family member who struggles with mental illness, and it’s very much a private thing,” said Reid. “People don’t necessarily know. Not that we want to ‘out’ them – but just to try to make it more normal to talk about this, and to be a resource in the community. If its true for some of the families in our congregation, it’s got to be true for some of the thousands of families in the Beach.”

Adams is going to tell his story – after a traumatic manic episode when he was younger, he has worked hard to keep his mental health in check through university, grad school, and becoming ordained. He likens mental health to other illnesses, like diabetes, which you need to check in with and monitor on a daily basis.

While Adams is proud of his accomplishments, he isn’t used to broadcasting them. But talking about mental health, particularly in the workplace, will go a long way towards breaking down barriers, he said.

Wilson is going to tell her story, too. Diagnosed in the early ‘80s, before effective medication was widely available, she spent years in and out of hospital before Prozac was introduced. She said she will probably be on medication her whole life, “and that’s OK. You do what you have to do. It doesn’t bother me that people know I’m on medication for depression – that’s my way of fighting the stigma, by trying to be upfront about it.”

Wilson, who is from Britain, says North America is ahead of her home country when it comes to acceptance about talking about mental health.

“There’s still this clouded feeling, like, ‘We really don’t want to hear it,’” she said.

But hearing it – and being able to talk about it – is important, she said.

“When you suffer from mental illness, you feel terribly isolated. Partly it’s the illness itself, it makes you feel isolated, but also I think our society can make you feel isolated because of this not wanting to talk about it, not wanting to treat it as a regular illness, like there is something special about it,” she said. “And that makes it so much harder for people to admit it in the first place, harder to go for help in the first place, and harder to get support when they’ve been diagnosed.”

The October 1 session is just the beginning. The group wants to take the conversations that begin that day and parlay them to further sessions, tailored to the group’s interests with at least one focused on the impact on the family.

“Part of it is trying to provide hope for people,” added Adams.

i have been suffering from depression for years-im on a medication which helps but does not completely covers all of it.but people hang in there as long as there are places like st.aidans there is always hope.