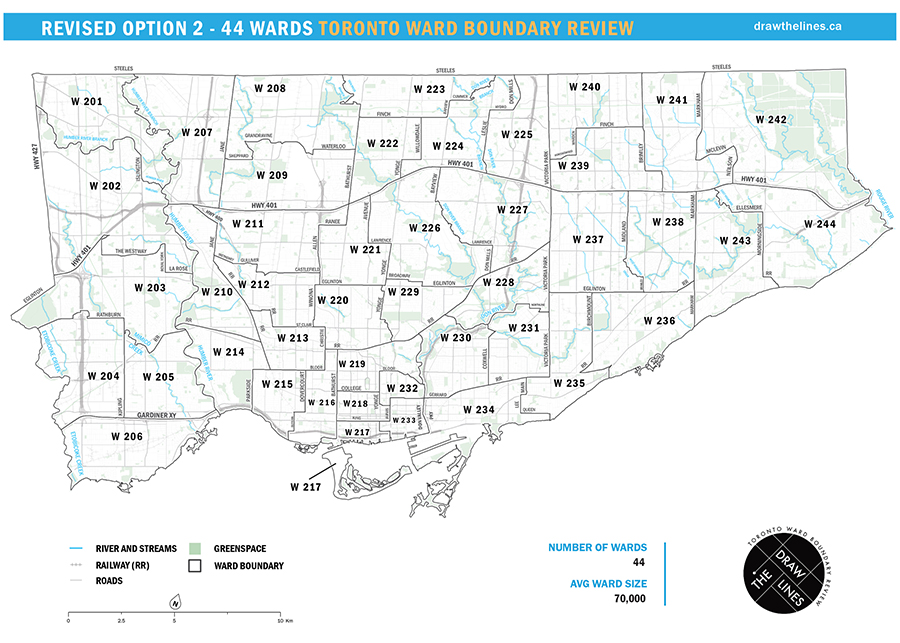 This is just one of a few ward boundary change options under consideration by the city. PHOTO: drawthelines.ca

There is still time to provide feedback on proposed changes to Toronto’s ward system ­– and Beachers might want to take note, as one of the options splits Ward 32 (Beaches-East York) in half.

Toronto’s ward system has been under review since 2014 – in part to keep up with projected population growth and account for changes to wards since the system was last redrawn in 2000 – with a final report presented to the city executive committee in May of this year.

But the ultimate recommendation of the report, put together by an independent consulting team, was the option which makes minimal changes to the current ward boundaries.

That option proposes 47 wards – there are currently 44 – with an average population of 61,000 – that’s the same average as today – with boundaries refined, but similar to what they are now.

If this were adopted, the area north of Queen East to Gerrard and east of Greenwood to Coxwell would be removed ­from Beaches-East York and become part of the Toronto-Danforth ward.

While the report recommends this option, the public is now being asked for feedback on two alternative options, following a city executive committee directive at its May 24 meeting. Feedback on these options will be included as a supplementary report when the final report is submitted to council later this fall.

The first alternative is a 44 ward option with considered feedback from consultation sessions, and the second is a 26 ward option that is mostly aligned with the provincial and federal ridings.

The 44 wards option would see the Beaches-East York ward divided at Main and Lee, with the western ward encompassing the area east of the Don Valley Parkway and north to Gerrard from the waterfront. The area south of Queen at Lee to the RC Harris Water Treatment Plant would be included in this ward, too.

The report notes that in this scenario, the Beach is one of several communities of interest that the team attempted to keep together by using different boundaries “but it has not been possible to keep these communities together in one ward because of issues with voter parity.”

This ward change would achieve voter parity – meaning the number of people in each ward is similar so that each vote can have equal weight – but comes with “significant challenges”, reads the report. “Although the number of wards (44), is the same as what there is currently, the configuration is significantly different. Some existing geographic communities of interest are divided and most of the current ward boundaries have changed.”

The 26 ward option would see the boundaries become the same – or as similar as possible – as the provincial and federal ridings.

“Using federal / provincial riding boundaries as potential ward boundaries is grounded in the assumption that it is administratively easier for staff and more transparent for residents to have these boundaries coincide. Some people feel that having the same boundaries for all three levels of government makes it easier for constituents to know who to contact to resolve their concerns,” reads the report.

The boundary review team adopted 26 ridings – including one new riding in the downtown core – to address several ridings with high populations. The average riding population would be 112,500. The report notes challenges in achieving voter parity in Etobicoke and says that attempts to correct the imbalance require changing ward boundaries. “The amount of adjustment negates the use of federal riding boundaries as ward boundaries.”

The public is now being asked to provide feedback on these two options, with a survey that can be completed until September 23, and a final public meeting tomorrow evening, Wednesday, Sept. 21 at the Etobicoke Civic Centre. That feedback will be included as supplementary material when the final report, which recommended the 47 ward option, is submitted to the executive committee in October.

City council is expected to make a decision on the ward boundaries by the end of this year in order for them to be incorporated by the end of 2017 in time for the 2018 election.

See the survey, maps and additional material at www.drawthelines.ca.