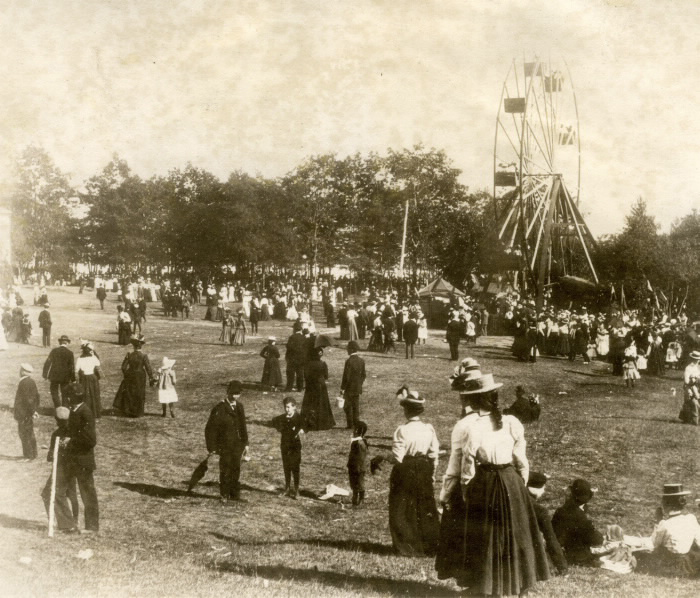 Munro Park in 1900 when skirts were long and films were short. PHOTO: Toronto Archives

Some like it hot, but this summer was just too much of a good thing. One way families cooled off was by enjoying magical movies like Finding Nemo and Zootopia under the stars at Kew and Ivan Forrest Gardens. Would it surprise you to know that there were free flicks in a lakeside park way back in 1900?

This was the age of invention and times were changing. In the 1890’s electric streetcars replaced horse-drawn trams. The Toronto Railway Co. figured that “trolley parks” would boost business on their lines. Large crowds jammed Munro Park (just east of Balmy Beach) after it opened in May 1896, but it closed when the lease was up after the 1906 season and the more spectacular Scarboro Beach Park came along in 1907.

Munro Park advertised “THE BEST AND BIGGEST FREE SHOW IN CANADA”. Attractions included two vaudeville shows a day with a variety of musical, comedy, acrobat, illusion and animal acts. I assure you I was never part of the Fletcher & Valding “Funny Hat Act” of 1899!

Toronto World wrote that strings of electric lights “gave a fairy-like appearance to the rustic scene after night.”

By 1900, Munro Park was also offering “the largest and best moving pictures ever seen in Canada” with flickering images which would last a few minutes.

Audiences were entranced by events happening as if they were real life in front of their eyes. They could watch film of world events in far-off places. An onrushing train scares everyone. Imagine the excitement!

When the novelty of “actualities” (real life scenes like sleighing in High Park) began to wear off, producers started making narrative films that told a story. In Aug. 1900, Munro Park advertised Cinderella, an almost six-minute French film in “beautiful colours” hand-painted frame by frame, in the Globe and Mail: “Tonight Cinderella will be seen at Munro Park and also a splendid series of new moving war and comic pictures by the marvelous vitagraph process.”

Film “exhibitions” would have been presented outdoors and likely projected onto a canvas screen. A band may have played in the background. By 1903 Munro Park had a “splendid covered auditorium.”This era saw the beginning of a new art form. Would motion pictures be a passing fad? Even Thomas Edison wasn’t sure of cinema’s future.

Fairy tales have delighted the young at heart for centuries. In 1900, wide-eyed children of all ages marvelled at Cinderella at the ball under the cool breeze off the lake as streetcars clattered by, much like kids of 2016 spread out on blankets in the park, delighted by fantasy images on a screen.

Ladies in the modest Victorian era wore big hats and ankle-length skirts that swept across the ground. A glimpse of stocking really was shocking.

By 1900 dancing and drinking were not allowed at Munro and Victoria Parks with “the entire prohibition of anything approaching vulgarity”.

There was no Sunday opening, heaven forbid, a day of church and rest.

The Toronto International Film Festival opens this Thursday. What would Victorians make of a Toronto-shot film like Below Her Mouth (co-starring Beacher Tommie-Amber Pirie) which was filmed by an all-female crew and tells the story of two women falling in love? Below her Mouth opens Saturday, Sept. 10.

Today the only reminders of the bygone era of the pleasure parks are the street names: Victoria Park Ave., Munro Park Ave. and Scarboro Beach Blvd. The thrilling rides and vaudeville acts and 5 cent hot dogs are long gone from the Beach now, but families still gather in parks to watch free “flicks” under the starry night skies.

Munro Park Ave. has some of the most coveted homes in the Beach. If you had $5.7 million lying around last year, you might have purchased the beautiful, circa 1915 home of Degrassi co-creator Linda Schuyler – right by the lake where Munro Park once delighted tens of thousands of visitors each summer.