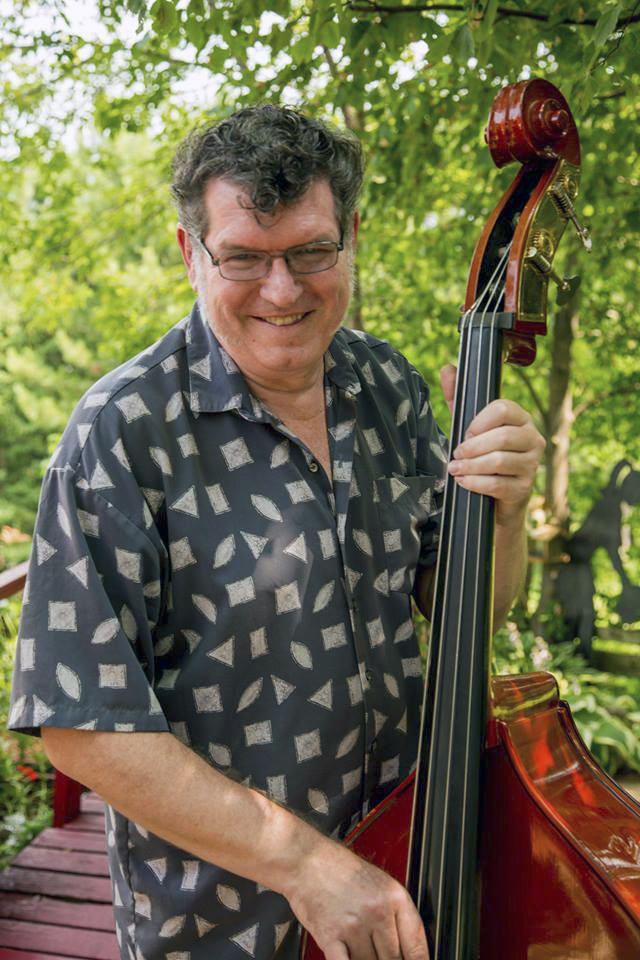 Mike Loghrin, diagnosed with Parkinson’s when he was 50, has been playing the upright bass for 30 years. PHOTO: Submitted

Musician Mike Loghrin knew something was wrong when his left hand started cramping up during routine practice sessions with his upright bass.

He attended physiotherapy, but that didn’t fix the problem. That’s when his physiotherapist said he should get his nerves checked.

Months later, after numerous tests to rule out other illnesses, the doctor told him he had Parkinson’s. He was 50 years old.

“Basically, how they find out if you have Parkinson’s is they do a test for everything else… and once they rule out everything else, they say ‘You’ve got Parkinson’s,’” Loghrin explained. “There’s no real diagnosis, there’s no definitive marker.”

Parkinson’s is a disease of the brain that affects more than 100,000 Canadians. Movement, mood, speech, a person’s senses, sleep patterns and cognitive function can be affected, and worsen over time.

Loghrin said after months of not knowing what was wrong, it was somewhat of a relief to finally pin down the issue.

“You knew there was something wrong, and you’ve identified it so you can move on,” he said. “But when you’re told you’ve got an incurable disease, that doesn’t make you happy. But what can you do?”

You can start by doing as Loghrin’s done, which is tap into the support of the community – and that of his family, friends and colleagues – to best prepare for what’s to come. Loghrin and his family recently moved from a three-level house in the Beach to a Hunt Club bungalow in anticipation of his future needs.

He has a Parkinson’s support group and attends physiotherapy sessions. He pays attention to his energy levels. At work, he’s modified his desk so that he can stand up at intervals.

“My family has been totally fantastic,” he said. “So has my work, in fact. I’m lucky in that I’m in a position where my bosses just ask what they can do to help.”

He said he knows people who keep their Parkinson’s a secret from their employers for fear that it could hurt their career advancement. “People are hiding it from their employers until they really have to show the symptoms. Whereas I could tell mine right away. Now I have a desk that raises up and lowers so I can stand up at times so I don’t get too stiff from sitting there,” he said.

Loghrin has reciprocated the goodwill he has received from others by becoming increasingly involved with Parkinson’s charities, like the Parkinson’s SuperWalk – a cross-country funding drive and walk, which this year has an event at Ashbridges Bay on Saturday, Sept. 10.

First made aware of the annual fundraiser by the family of his late friend Bert Baker, the walk has grown in importance to Loghrin. This year, for the first in his neighbourhood, he has gone well beyond entering a team. At the inaugural East End event, he will emcee, his wife has helped organize, and his band, Davis Payne, will provide entertainment.

Davis Payne is used to playing events and benefits – the rockabilly band has been together for nearly a decade, and friends and jam partners for much longer. The lead singer and his friends even gifted Loghrin his first stand-up bass over 30 years ago.

But this benefit is special for Loghrin in that he is so personally connected to the cause.

“Parkinson’s, a lot more people are getting it,” he said. “It was always thought of as an old person’s disease, but in my support group I’m meeting people in their 30’s that have had it for a while,” he said. “A lot of people don’t know about it, and yet it can be a very crippling disease. Because you live to such an old age, you end up being institutionalized a lot. So you just want to make sure people are aware of it and try to get funds for it.”

The concert is also an opportunity for Loghrin to practise another tenet important to him – continuing to do what he loves, despite the challenges.

“I play a lot more open notes than I did in the past, that way I don’t have to trust my finger,” he said. “I suppose there are things I can look into [to further modify how I play], but right now I’m just doing what I can. I do a few crazy stunts with my bass, toss it behind my back, that kind of stuff – so it’s something I like for the show and I just can’t imagine myself doing anything different…

“The disease’ll take it from me some time, but until then I’m going to keep fighting to play.”

The East Toronto Parkinson’s SuperWalk at Ashbridges Bay is this Saturday, Sept. 10. Check in is at 9:30 a.m. with opening ceremonies at 10:40 a.m. and the walk beginning at 11 a.m.