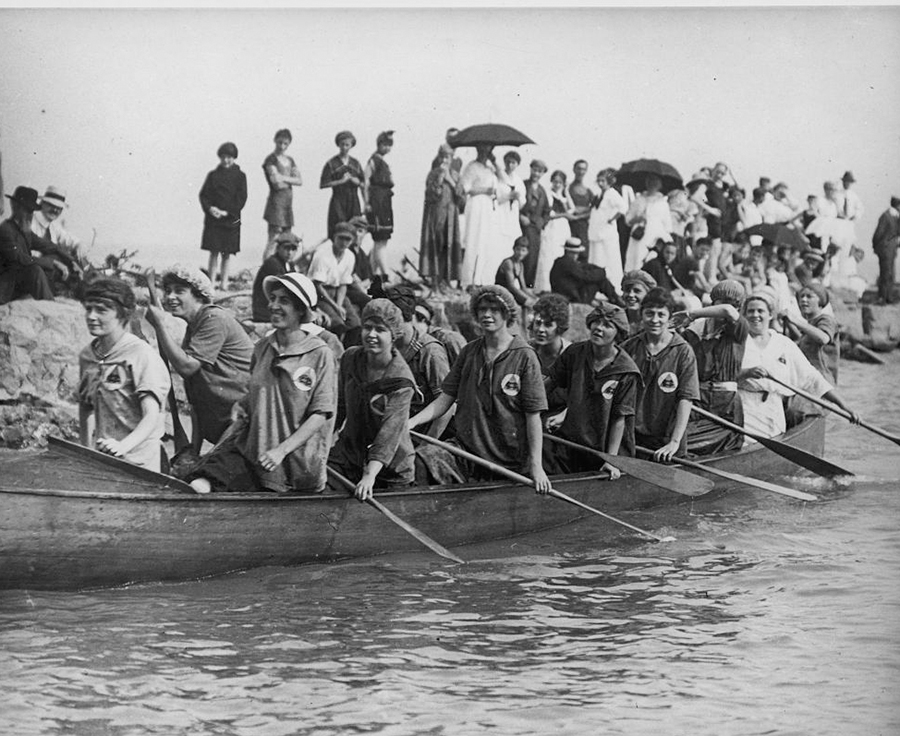 Women paddle in a war canoe at the Balmy Beach Club in 1909. City of Toronto Archives

The eastern end of the city recently received a bad rap by one of our daily newspapers, with an opinion piece suggesting there was not much happening in the East End, mainly the Beach.

This is and was a load of nonsense. Nowhere else do you see such a diversity of activity as in our eastern area – from Coxwell Avenue on the west to Victoria Park on the east, the waterfront on the south to the Danforth on the north, it’s unlike any other area in Toronto.

We are now receiving word of some of the activities of some of our great East End athletes down in Brazil for the 2016 Olympics. We are proud to have a young athlete who has won four medals for her Beach city and country.

Sixteen-year-old Penny Oleksiak is a great Olympian who has a stellar future in front of her. She has a great family which includes other gifted athletes.

This article was not to be about Penny or others like her, but about our sports and recreation areas in the Beach. However, when I began to write it, the world was astounded to see this great young athlete break all types of athletic and Olympic records, so I had to begin with this great Canadian athlete from the Beach.

For our athletics tour, let us start with grey sand area east of Coxwell Avenue called Ashbridges Park. Do you know that in this area beside the lake at least 1,500 athletes play beach volleyball? Where else in the city do you find so many athletes playing beach volleyball, possibly preparing for the Olympics, like past local heroes John Child and Mark Heese, who competed in three Olympic games, winning bronze in Atlanta in 1996?

Let us not forget the aquatic sports at Ashbridges Bay. We first find the Beaches Lions Club, a great social club specializing in serving the community for eight decades. The Lions have a clubhouse and water facilities for boaters from the Balmy Beach Canoe Club and other organizations. It was the Lions Club that donated two wading pools for children at Woodbine and Kew Beach Park.

South on Ashbridges Bay we find the Toronto Hydroplane and Sailing Club, where many sailors have their canoes, boats and kayaks.

The area is home to the Ashbridges Bay Yacht Club, originally the Woodbine Yacht Club. These integral aquatic facilities have been around for many decades.

North of the Lakeshore on Coxwell Avenue, we have the Beach Skatepark, where those who are young and young at heart can skateboard to their hearts’ content – athletes abound!

East on the sunbather-filled beach, we come to the Donald Summerville pool at the foot of Woodbine Avenue. Donald Summerville was a mayor of Toronto who resided in the Beach area. A great sportsman, the pool was named after his death in 1963.

For those tennis fans, east of the pool is the Kew Beach Tennis Club at the foot of Waverly Road and Kenilworth Avenue. The club has been around for well over 100 years, winning many awards and spawning some of the best tennis players in the area.

Again proceeding east on the lakefront, we come across a combination ice rink and lacrosse area at the bottom of Lee Avenue. The Beaches Lacrosse Club is one of the finest lacrosse clubs in the area, with hundreds of successful lacrosse players practising here over the years.

In the winter, the lacrosse rink turns into the Kew Beach Skating Rink, the spot for pleasure skating in the Beach. The Balmy Beach Oldtimers have played in this rink for many years.

Next door is the championship-winning Kew Beach Lawn Bowling Club, which has been around for over 120 years. It welcomes young and old, so if anyone wants to join, please come down.

How can we not comment on one of the Beach’s greatest sports – baseball? Kew Gardens Baseball Diamond a couple of hundred feet south of Queen at Lee has been a part of the East End scene for more than 120 years.

At one time, there would be over 7,000 fans coming to see baseball at Kew Gardens. Also, sports enthusiasts, we had ladies playing fastball. Hold onto your hats – these ladies drew crowds of 7,500.

Remember – these teams played in the 1930s and 1940s when there was no television.

Pantry Park in the back of Kew Beach School was named by the late great Ted Reeve, who said the original sports field was the size of his pantry. Over the years the park expanded and has been used for many activities.

Now, east to the bottom of Beech Ave., where we gaze upon the legend by the lake, the venerable Balmy Beach Club. I would write about the numerous events and awards that the club and the members of the club have won, but there is not enough time. The club, which also boasts a terrific lawn bowling club, has produced more medals in aquatic sports, rugby and football than I can recall.

A little further east is the Silver Birch Boathouse, which has been around since the 1930s. Today, it is the only boathouse where you can store canoes and kayaks for a nominal fee, but at one time there were dozens of boathouses along the beach.

We must also mention the city and employees who carefully maintain the parks and green spaces.

Thanks especially to the parks and recreation people at Beaches Recreation Centre at 6 Williamson Road and Lee Avenue.

These recreationists are in a class by themselves with the volunteers of the Beach Advisory Council, responsible for the annual Beaches Spring Sprint, which attracts nearly 800 people for a race along the boardwalk, swimming programs at Glen Ames School, fitness programs at the Kew Beach boathouse, seniors’ programs in Kew Gardens, archery, basketball, gymnastics, and many more.

All the best to our athletes, past, present and future.

Gene Domagala will lead a historical walk Saturday, Sept. 10 at 1 p.m. Meet at the northest corner of Danforth and Main. The walk will end at the old mill on Dawes Road. All are welcome.