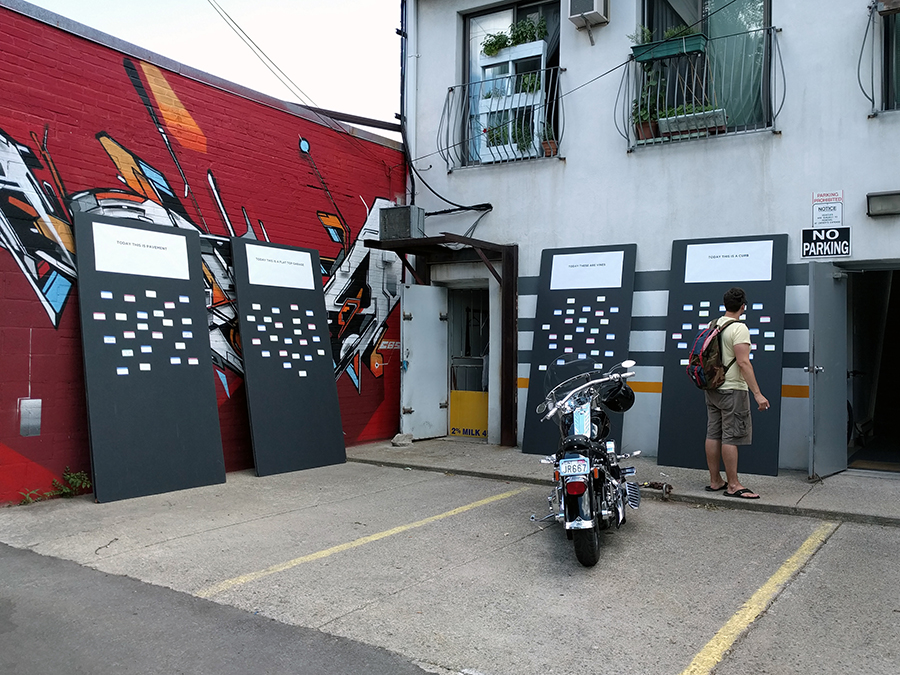 Earlier this year, in a session at a laneway near Danforth and Woodbine, community members envisioned what the laneway could look like in 20 years. PHOTO: Submitted

That was the question posed to Danforth East residents by three recent OCADU graduates keen on exploring under-utilized urban space and the hidden potential of laneways.

East End residents – and other curious minds – will see the answer this weekend when the Toronto Laneway Crawl, a series of pop-up festivals focused on transforming Toronto laneways, hits the Danforth.

OCADU Strategic Foresight and Innovation graduates Eman El-Fayomi, Jennifer McDougall and Mike Stulberg are the team behind Laneway Futures T.O., a project that will see a life-sized mock-up of a possible future Toronto laneway August 28 near Danforth and Woodbine.

“I’ve been interested in laneways forever,” said Stulberg. “Tons and tons of under-utilized space in a city with a growing population and naturally growing need for space for recreational purposes and green spaces.”

The project, which began as a grant proposal last year when the three were still in school, is informed with insight from two sessions where the team asked participants to envision what laneways could look like in the future – the first a broad brainstorming session in Graffiti Alley downtown and the second a more tactile experience in the Danforth East laneway where the final installation will be mounted.

“We realized that this is a huge opportunity for civic engagement, in that it is a public space issue and the public space offers an excellent opportunity to host that conversation,” he said.

The responses from the public varied from “blue-sky, super optimistic” ideas – one child suggested a slip-and-slide – to solutions for “concrete, on-the-ground problems that people face.”

While creating the design, the team tried to keep the design positive and plausible so as to best reflect what they heard from the community. The end result is a life-sized prototype of a future laneway scenario. People can walk through and interact with the installation to experience what it would be like in real life.

“A lot of what you see with planning proposals is really abstract. At best you see drawings and you’re left to imagine what that would be like. That’s what the public is expected to get behind – a 2D, 3D drawing from a single perspective. Drawing is great but it’s totally different when you’re walking through a space in reality,” he said.

The project got a boost when it teamed up with Michelle Senayah with the Laneway Project, the host of the Laneway Crawl.

Stulberg said the Laneway Project helped with the logistics of meeting with various neighbourhood groups on the ground. The Danforth East neighbourhood boasts particularly engaged groups and associations, he said, noting that the neighbourhood was picked for the installation because it is a neighbourhood in transition.

“It’s not changing super fast, but it’s on the horizon,” he said. “To us that’s an interesting opportunity because people are already thinking about the neighbourhood dynamic.”

And what can visitors expect to see at the event?

Aside from saying that the installation will have a local and city-wide focus, considering not only the Danforth East laneway but how it is linked to the larger city, Stulberg plays coy.

All the more reason to see the installation in person this Sunday, August 28 from 1 p.m. to 5 p.m. The location is the east-west laneway just north of Danforth Ave., between Woodbine Ave. and Woodmount Ave.

We can hardly wait to see what you are bringing to the neighbourhood! Excited to tap into the hidden potential of our laneways with your help.

Too bad they went on to private property without all permissions in place prior to this picture and inviting people onto an unfenced parking pad.

My motor cycle was damaged in my parking spot. Thanx so much. Hope you enjoyed your time because it ain’t happening again on private property.