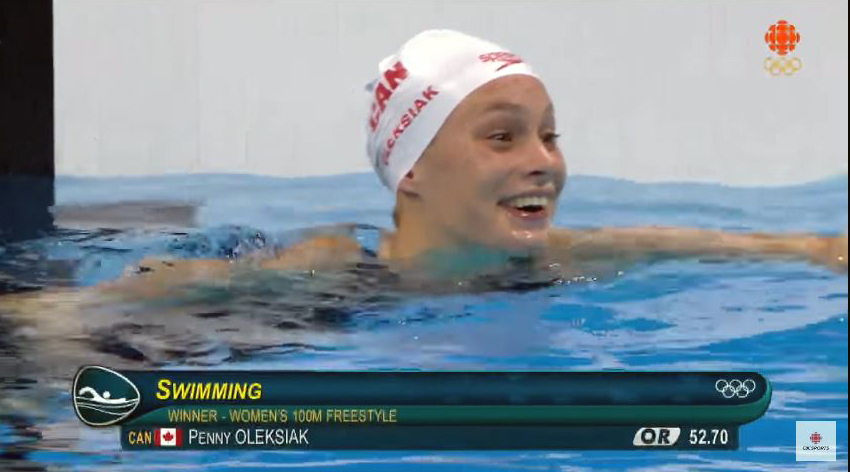 Already known to many in the Beach, 16-year-old swimmer Penny Oleksiak is now a household name across Canada.

The four-time Olympic medalist captivated the nation at the 2016 Summer Olympics in Rio this month, becoming Canada’s youngest Olympic champion with a gold medal in the 100-metre freestyle, silver in the 100-metre butterfly, and two bronzes in the women’s freestyle relays (4 x 100 metre and 4 x 200 metre).

The first Olympic champion to be born in the aughts, Oleksiak shattered Canadian records – she brings home the most medals ever won by a Canadian at a summer games – and set Olympic records, all the while handling the influx of media attention her newfound status entails with grace and humour.

To cap off an incredible 16 days, on Sunday, Oleksiak carried Canada’s flag in the closing ceremonies.

She was an early favourite for flag bearer and delayed her departure from Rio once many began speculating that she deserved to lead Canada’s entrance.

Oleksiak began swimming when she was nine and broke onto the world stage with a compelling performance at last year’s World Juniors. Now, her coaches and fans believe she could be Canada’s most successful Summer Olympic athlete of all time.

“Why can’t Penny be the most medal-winning athlete in the history of Canada?” asked her coach Ben Titley during a media availability in Rio on August 14.

“I just see it as that I need to love what I do. Right now I really love swimming and it’s something I want to continue doing. As long as I have a love for the sport I’m going to keep progressing, I hope,” she said. “I just want to be able to keep getting better. Whatever happens, happens.”

She said she did not think that life would be much different when she got back to Canada, adding that she was enjoying the notes of congratulations from friends, family and strangers.

Beachers celebrated the Monarch Park Collegiate student’s triumphs with enthusiastic viewing parties, excited posts on social media and chats in coffee shops, and talk of a parade to welcome her home.

“As Canadians, we’re proud of all of our athletes. But here in the Beaches, it was particularly special for us to cheer for Penny and to watch all of her success,” said Beaches-East York MP Nathaniel Erskine-Smith, who noted that he had left a message for her parents and would be presenting her with an official certificate of congratulations upon her return.

“I wish her many more Olympic medals, and Drake tickets,” he said.

Oh, that’s right – Oleksiak’s other big story of the games?

A shout-out and messages from Toronto icon and hip-hop sensation Drake, alluding that he will see her at one of his upcoming shows.

More details about the parade plans are promised this week, with organizers waiting on a permit from the city. Oleksiak touched down in Toronto earlier today, meeting fans and media at Toronto Pearson Airport before heading home.

UPDATE: A parade celebrating Olympians past and present has been confirmed for Sunday, Aug. 28. The parade will begin at East Lynn Park at Danforth and Woodbine at 11 a.m., travel south down Woodbine and east on Queen to Kew Gardens where celebrations will take place from noon to 2 p.m.

Here’s what area politicians had to say:

“We are so proud of our very own Olympic medalist, Penny Oleksiak! Penny has grown up in the Beach and attends Monarch Park Collegiate.  Watching Penny win FOUR medals in Rio has been such a thrill for Canadians across the country and she has so much community support.  Congratulations, Penny!”

“I am thrilled to congratulate Penny Oleksiak on her outstanding success in Rio. Beaches-East York and all of Ontario and Canada are so proud of her crawling her way to a gold in the 100 meter freestyle, and with her teammates, two bronzes in the 100 and 200 meter relay events. She then went over the top in securing a silver in the 100 meter butterfly. Congratulations to all of Team Canada and our own Penny Oleksiak.”

Beyond proud of TO’s @OleksiakPenny for being chosen as #CAN flag-bearer at #Rio2016. Looking forward to see what your future has in store.

Great chatting with two golden Canadians today @oleksiakpenny & @rosiemaclennan. You’ve made us all so proud!