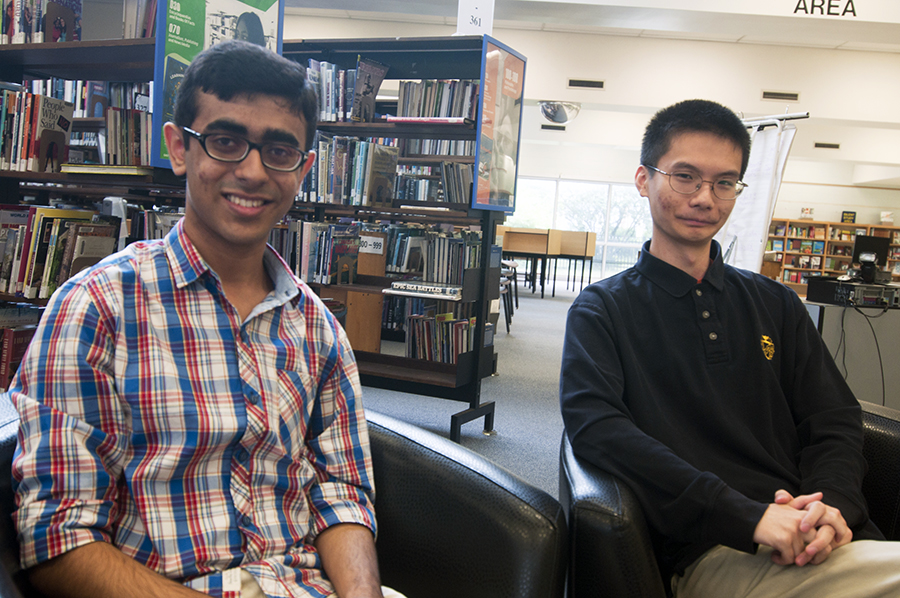 Two East End students have the distinction of being the Toronto District School Board’s top scholars – both graduating from East York Collegiate with near perfect averages, substantial scholarships, and big dreams.

In a sit-down interview in front of an audience that included media, their families and a group of proud teachers and school board officials, 18-year-olds Kenneth Wong and Sailesh Nankani discussed their accomplishments and the dedication it took to pull off averages of 99.8 per cent and 99.7 per cent respectively – the two highest marks in the school district of over 27,000 students.

Nankani, whose family has only been in Canada for three years after emigrating from Pakistan, said moving to a new country was an adjustment, but “East York became my home” and he soon developed relationships with like-minded friends – like fellow top scholar Wong – and found mentors in his teachers.

“The teachers are wonderful here, and so are the students,” he said. “They’re very encouraging and they were very helpful.”

He credits his family for helping him work to his potential and continuously strive for improvement in his studies.

“They’re the best,” he said. “They inspire me, they motivate me, they support me. They taught me to be honest and be hardworking.”

Nankani’s eyes light up when he talks about his love of math, physics and sciences – he is attending Waterloo next year for a joint program in computer science and business administration, but is not entirely sure where his career will lead him. He imagines it will be in research. But while he loves math and physics, he also developed an affinity for English literature – he said it was his most difficult subject and required extra effort.

He balances his studies with volunteer work – he has spent time at the Danforth community centre Access Alliance, the Canadian Cancer Society Relay for Life, among others – and said that “it’s an important part of life.” He’d encourage new students to not be afraid to try new things, and to seek continuous improvement even when there are setbacks.

Wong, who has a strong sense of self-discipline paired with a dry sense of humour, also preaches self-improvement.

“Don’t be satisfied until you get perfect,” said Wong, when asked how one attains a 99.8 per cent average. “If you don’t push yourself you’re never going to improve.”

Wong was born in Canada to Chinese parents, and has a strong sense of citizenship – he has volunteered with the Royal Canadian Legion handing out poppies and believes that it is important to appreciate and support Canada’s veterans.

His favourite subject is history. Last year he won an essay contest through the Canadian Civil Liberties Society last, and enjoyed delving into the Charter of Rights and Freedoms and Canadian laws around breathalyzers, prompting some to suggest he would make a good lawyer.

And while he is attending University of Toronto’s Trinity College next fall for history and political science, he said that he is not exactly sure what he wants his career to be.

“But I do know that I want to spend my life in public service,” he said. “I think that’s because Canada gave me a home and place to grow up, and I think I should be a contributing member of society, devote my life to serving Canada to the best of my ability.”

To be a top scholar, he said you have to have a genuine love and passion for learning. He would encourage young students to make sure to show up for class.

“In Canada we should be very lucky that we have a publicly funded education system that hardworking taxpayers pay for, and students should be taking advantage of that,” he said. “One of the biggest reasons why people are failing high school is because they’re skipping class. Come to class and do the work, that’s (half the battle). High school isn’t about being smart, it’s about effort.”

Congratulations to the young scholars.