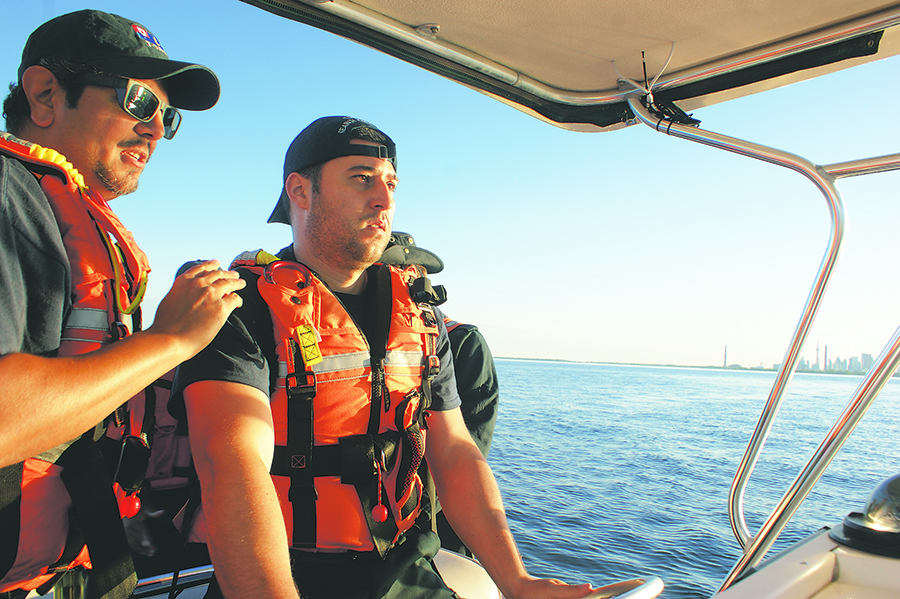 During a routine training session on a pink-hued Wednesday evening earlier this summer, the Toronto Search and Rescue (T-SAR) team spots a figure in the middle of Lake Ontario.

The captain throttles the boat forward so the group can take a look.

Is it a person? A capsized raft?

Not quite. As the boat approaches, the object, marked as a blinking red light on a high-tech screen at the front of the boat, comes into focus before our eyes. It quickly reveals itself to be a volleyball – a “Wilson” brand, no less – prompting a series of Castaway-themed jokes between the close-knit crew as they pull it onto the boat.

While an abandoned volleyball might seem anti-climactic for a search and rescue outfit, its retrieval is important. A boater, noticing a figure out in the distance, might call it in as a potential person in the water, which in turn would mean resources spent sending out a crew on a rescue mission.

The more hazards the Toronto SAR team can pull out of the water during training sessions, the less resources the Coast Guard – T-SAR falls under its mandate – will spend on false alarms.

It’s the second season for the volunteer T-SAR 11-person crew, founded last year in response to the retirement of the area’s longtime marine rescue outfit. Based out of the Navy League at Ashbridge’s Bay, the group meets several times a week to train, maintain their boat and equipment, and assist with community initiatives. Initiatives like the pleasure craft courtesy check program they run at East End beaches and boat launches that sees them check boats – voluntarily – for proper life-saving equipment and offer life jackets on loan to boats who might not have enough. They visit schools to press the importance of boating safety and wearing life jackets. Recently, they acted as a guide for the waterfront tall ship festival.

They take part in serious rescue missions too – earlier this summer, when two boaters went missing off the coast of Bluffers Park, T-SAR got the call from the Coast Guard to assist with the mission, and the crew spent a long, frigid, stormy Sunday night combing the lake for the missing boaters.

The group is always looking for more help. Volunteers range from former coast guard and navy personnel, to people with extensive boating and marine safety experience, to firefighters learning how to apply their rescue skills to the water.

They are hoping to eventually get to 50 people so they can be out on the water every night. T-SAR is a tight group that takes pride in what they do – their equipment is top-notch and they invest in the latest technology and instruments.

If you don’t think you can volunteer, you can still see the crew in action – as part of a fundraising initiative, they are inviting members of the public on board throughout the summer. For a charitable donation, community members can go out on the boat with T-SAR and enjoy refreshments.

More information can be found on their website at torontosearchandrescue.com.