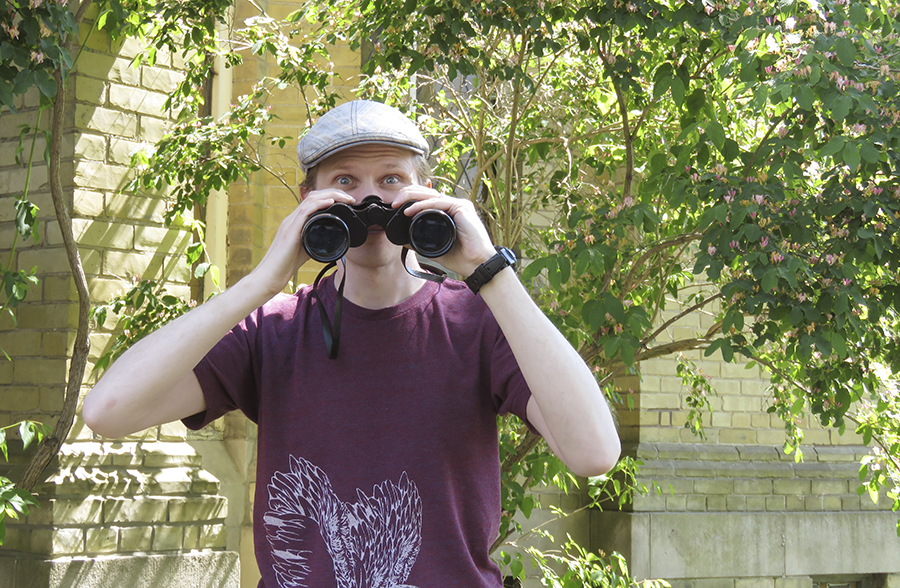 Alex Eddington wrote and stars in ‘Life List,’ a mobile play about –and that involves – birdwatching. PHOTO: Andrew Gaboury

It’s common knowledge that the East End is home to a sizable creative set. If one needed proof, one need look no further than the 2016 Fringe Festival, featuring a wide range of talent from the neighbourhood.

The Fringe Festival began in 1989, and plays are chosen entirely by a lottery system – no juries for this fest. This system allows total newcomers to be billed alongside theatre vets, encouraging experimentation among the creators, and spurring a sense of adventure for patrons.

Fringe 2016 performances run from June 29 to July 10. For full dates and times of specific shows, and to purchase tickets, see fringetoronto.com. During the festival there will also be a box office in the parking lot behind Honest Ed’s at 581 Bloor St. W. Note that no latecomers are admitted to Fringe shows.

Life-long Beacher Alex Eddington is back at Fringe this year stretching the boundaries of traditional theatre. His last appearance in the festival was with his production Yarn in 2013.

Life List takes a fitting and novel approach to telling stories through birdwatching: the play takes place on a walking tour through the West End, mixing storytelling, music and, yes, actual birdwatching. The performance aims to mix autobiography with magical realism, according to show creator and performer Eddington.

Audience members who don’t bring their own will be supplied with clipboards and binoculars, and the group will set out on an expedition to spot the rare “white robin” in Seaton Village. Before his mother died in 2014 of breast cancer, she passed on her life list of birds to Eddington, and asked him to keep adding entries. The stories told during Life List vary depending on what birds are actually spotted, but “they all lead back to his mother, his pet bird Spike and the cancer that took them both,” according to press materials.

Eddington describes Life List as “a unique site-specific show that uses the quirks of a historic Toronto neighbourhood as its backdrop.”

The play is co-directed by Andrew Gaboury and East End resident Tyler Seguin. For more about Life List and Eddington see alexeddington.com. Take note: the play runs rain or shine, so dress for the weather – and bring your binoculars.

Beach resident Jake Runeckles is co-founder of Vocative Theatre, and one of two performers in Knots, a performance piece premiering at Fringe.

“We call it a theatrical collage as opposed to a play, because we do not follow one storyline,” says Runeckles of Knots.

Taking knots as a metaphorical starting point, the piece uses literal knots – from shoe-tying to sailing – to create a piece about the unseen knots in relationships, culture and politics. Performance, movement and original music help Runeckles and Lucy Meanwell tell their story in a non-traditional way.

“We maintain that anyone who sees this show will leave with a new appreciation or consideration of these simple twists and turns that tangle us up,” he says.

How May I Mate You?

Last year the troupe won the Patron’s Pick award at the Robert Gil Theatre during Fringe, and this year they’re back with How May I Mate You?, running at the Theatre Passe Muraille Mainstage.

The play focuses on the world of dating and relationships through the lens of a game show. The game format offers “five rounds of non-stop fun (and maybe a little bit of discomfort)” running through rounds and topics such as ‘Calls from Your Mother’, ‘Past Indiscretions’, ‘Twister for 2’ and a ‘sexy lapdance competition’.

Naulls wrote How May I Mate You? and also acts alongside Wooldridge.

“We have a vested interest in this community because it helped us to develop into who we are today,” writes Naulls, who credits “outstanding teachers and the positive environment” at Notre Dame for helping her develop her passion for drama and the arts.

Water Wonders is being billed as Fringe’s first ever outdoor production for young audiences (ages 8 and up). The play tells the story of one boy’s love of nature and his fight to preserve it.

One of the unique aspects of Fringe is its embracing of site-specific performances, and Water Wonders is one such play – the show happens in the garden courtyard of St. George the Martyr Church on John Street. (The production will be moved into the church if the weather doesn’t cooperate).

East Yorker Cheryl McNamara said the play was written as a direct response to a friend who, as something of a biodiversity expert, gave a simple answer to a question from the playwright.

“I asked her if she could do one thing to make a difference what it would be. She said: to teach children the importance of nature. I immediately thought of writing a play about a boy’s fight to save it,” she says.

This is her third Fringe play, after The Dick’s a Dame, co-written with Jane Moffat, and The Dizzy & Dale Chronicles. All three are in partnership with director Sue Miner.

Playing the lead is Beacher Chase Jeffels. This will be his first Toronto Fringe appearance, though he has acted at the Edmonton Fringe and in other local theatre productions. Other actors on the bill are Brenda Kamino, Michelle Langille and Mike Ricci.

Upper Beacher Barb Scheffler has written her first play for children. Pirates Don’t Babysit! will run as part of this year’s Fringekids Festival.

Scheffler’s own children’s love of pirates inspired the story, which follows Jenny’s adventures with a band of pirates who show up at her door looking for buried treasure. Jenny agrees to help in exchange for help looking after her baby sister.

The show is fit for the whole family, and offers a fun time with some bumbling pirates helping keep the baby happy.

The pirates are played by played by Carl Bauer, Jamie Johnson, Jesse Perreault and Hilary Wilson. The ‘baby’ is played by Jaclyn Nobrega, while Carina Cojeen plays mom.

The role of Jenny is played by Scheffler’s 9-year-old daughter Olivia Harms, who also provided inspiration for the character.

Great article, but I am the playwright for Pirates Don’t Babysit! And my name is actually Barb SCHEFFLER. I have no idea who Barb Scheer is, but I wish her lots of luck! I promise our show is terrific no matter who you think wrote it!