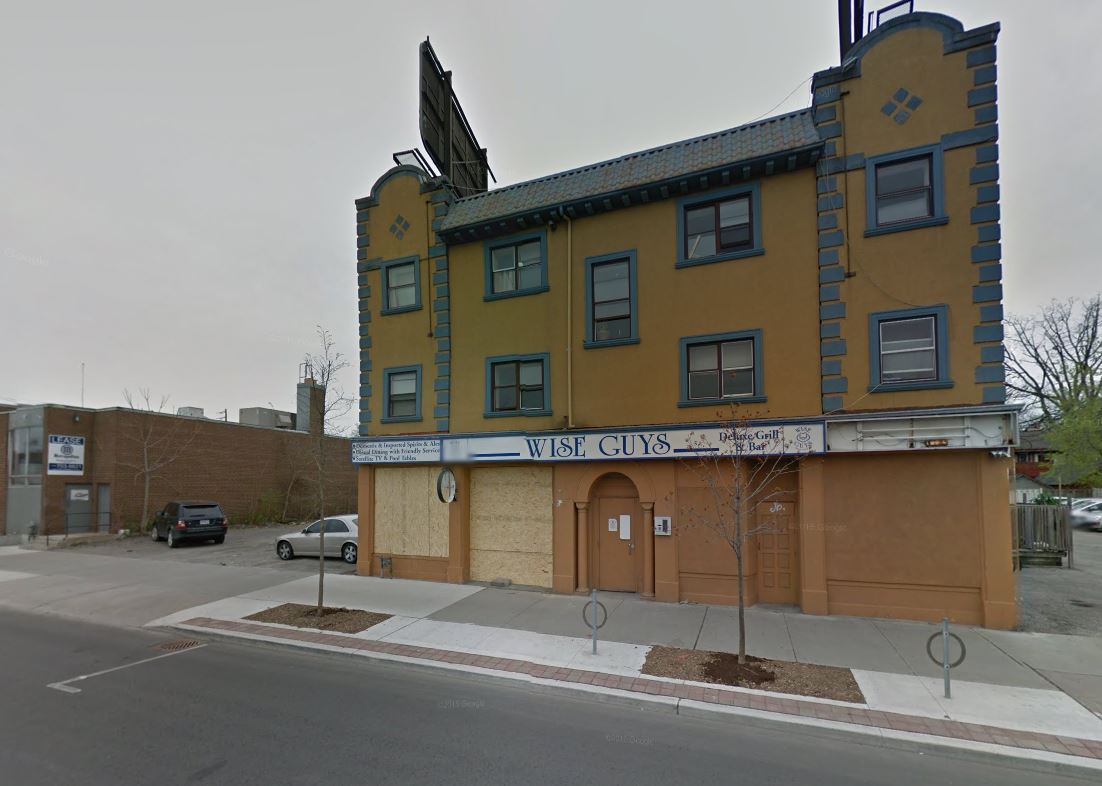 A condominium development is proposed for the site of the former Wise Guys hotel and bar.

East End residents took a look at updated plans for a proposed 8-storey condo development along the Danforth at a June 20 community consultation at Secord Community Centre.

Marlin Spring’s Canvas Condominium development is proposed for the site of the former Wise Guys bar at 2301 and 2315 Danforth between Morton Road and Patricia Drive. The original application proposed 166 residential units with 259 square metres of live/work units along Danforth Avenue. That’s now changed to 172 residential units and 377 square metres of retail and commercial space along Danforth. The building’s height has also been scaled back roughly three metres.

City planner Derrick Wong said that the revised application has “significant” changes which stem from a community meeting earlier this year where residents expressed “legitimate issues” with the proposal.

“Are we there yet, 100 per cent? No,” said Wong. “There are still a couple of issues, but (the revisions made) are pretty significant.”

Most notable is the shift away from live/work units to straight retail and commercial units, and changes to the building’s façade and structure as it faces the Danforth.

“There were comments coming back that it was too monolithic,” he said. “If you take a look at the newest elevation he’s broken it up quite a bit, particularly at grade, he’s introduced more elements, more planes in order to make it more interesting, because that was something that kept coming back.”

The city prefers retail and commercial space to live/work units at this site, explained Wong.

“At the end of the day what we’re looking to do is animate the street,” he said. “This has a very large frontage on Danforth. If you put residential at grade then you’re not going to have as much activity. You want commercial that’s not just a service to the residents but also animates the street.”

Developer Zev Mandelbaum of Marlin Spring still thinks live/work units would be better for this property.

That’s because he thinks “the future of street retail in the city of Toronto is very tough as retail transforms itself and evolves to become more digital. The idea of a live/work is where a person can float one mortgage for both his business and his home and it can create a dynamic use of the space, whereas before he’d be leaving a larger footprint, now he can leave a smaller footprint over two levels. I think it creates an opportunity where people can have one mortgage, a more efficient, more viable business and create more life on the streets as well.”

But ultimately, he decided to listen to feedback from the city and residents who questioned the viability of the live/work spaces.

“It definitely was not my preference,” he said. “But we listened to the community and the city staff and they had some reservations about it and we complied.”

He said the project plans have gone through “many, many, many changes” and he thinks “right now we have the optimal plan that satisfies everyone to the best of their abilities.”

“The project has come along in a good way,” said councillor Joe Mihevc, who replaced councillor Mary-Margaret McMahon on this file because she lives close to the development. “The height has been reduced by over nine feet, the angular planes are more respectful of the angular plane guidelines, which in lay terms means less shadow, less overlook on neighbours both to the north and south.”

He said the developer has been responsive to concerns from residents.

“I think we’re really close to a deal here. You never make a final decision until you see the report, but I think this is coming in a good direction,” he said.

Residents still have concerns – that includes congestion, particularly on Patricia Drive, construction, and increased laneway activity. But Wong said that even though people are used to only a few cars in the laneway, it is a public laneway and the city’s policies around developer’s utilization of laneways is a safety and planning issue. He acknowledges that increased activity takes “some getting used to. It’s a difficult transition.”

At this particular site, the laneway is not continuous and has a house at one end. If the city determined that the traffic impact would be too much or too dangerous, they could require that the developer purchase the house before allowing the development to proceed – but that isn’t the case here, explained Wong.

Residents still have an opportunity to provide feedback to the revised proposal before city staff develop their report and recommendation, which will head to the East York Community Council in the fall.

And a group is still collecting signatures for its petition opposing the size and height of the development. The group, which calls itself Friends of Danforth East, submitted a first petition to the city late last year and has been actively pressing the developer to make changes to its proposal.