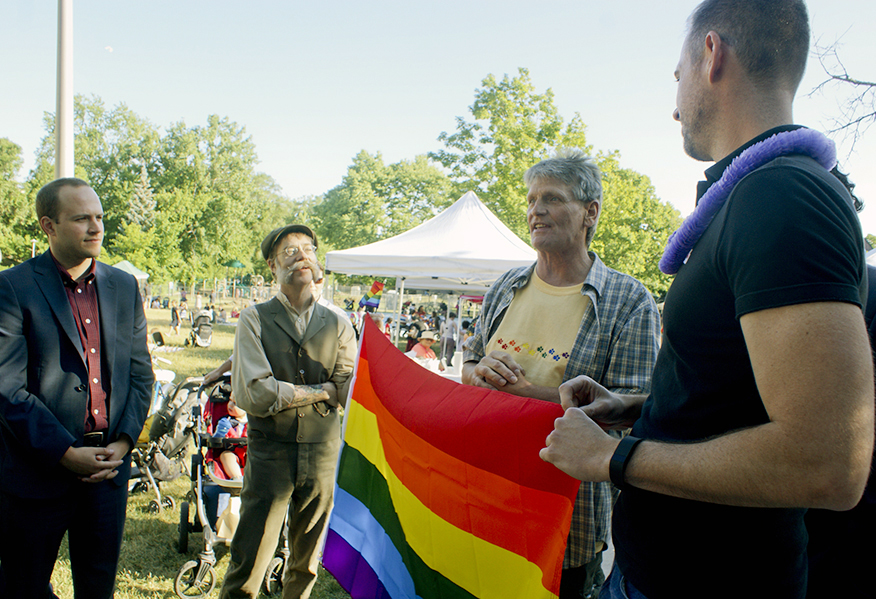 Visitors to the East Lynn Farmers’ Market were treated to an impromptu pride rally yesterday as East Enders gathered in support of a man whose pride flags were torn down from his home.

The rally, which began at Silly Goose Kids on Danforth where supporters picked up pride flags for their person and their homes, came together in a matter of days after word spread that Dean Will had seen his pride flags taken down three times and had hate-fuelled language directed at him. The community expressed outrage at the attack and hatched a plan to try to make something positive come out of something negative.

In front of a couple of dozen supporters, Michael Rudek of the Danforth and Woodbine Pride Group presented Will with a large pride flag to replace the one that was damaged in the vandalism. Will spoke to the crowd, expressing thanks and putting the situation in a broader context.

“This isn’t just about me, this is about all of you,” said Will. “The rainbow flag doesn’t just mean ‘gay’. It means all of you, no matter who you are, whether you’re purple from Mars.

“Don’t ever forget, you don’t have to justify who you are to anybody. Fly your flag with pride,” he said. “I want to thank all of you for all you’ve done. It’s great. It means that the community is inclusive, and that’s the kind of world we all want to live in. Remember, hate is on a continuum — it starts with words and stealing flags and it can lead to what happens in Orlando. So you gotta squash it when it starts.”

“It’s an aberration this kind of thing happening in the riding,” said Erskine-Smith. “And when it does, all credit to Mike and the Facebook group and the community who rally around. It’s crazy to think that this would happen here, and I think it’s important for the neighbourhood to stand up and say it is unacceptable and won’t be tolerated.”