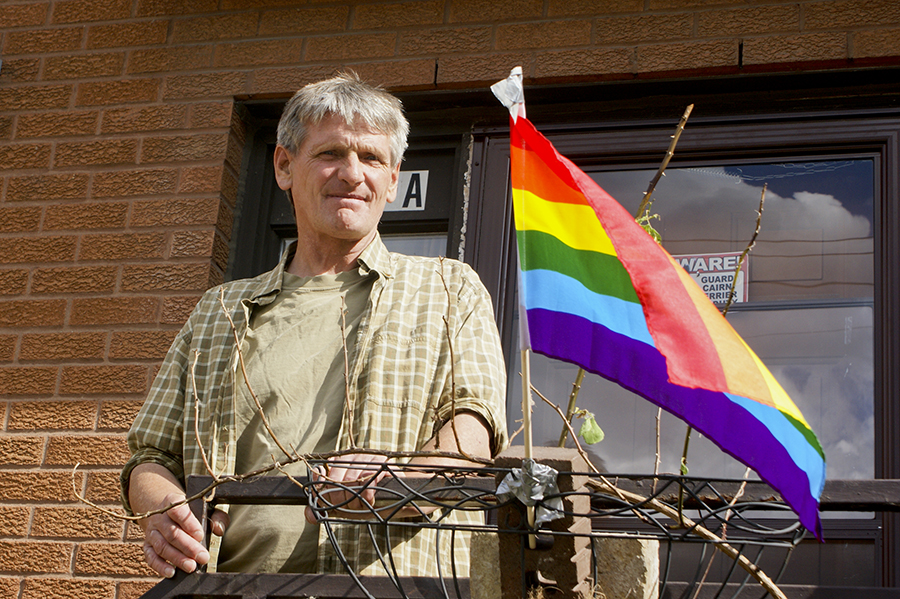 Dean Will outside of his home June 21. He's attached thorny rose branches to his Pride flag to detract people from stealing it. PHOTO: Anna Killen

Hang out with East Ender Dean Will on his front steps for 20 minutes and it’s notable how many of the people who pass by stop for a quick chat.

Neighbours walking their dogs, escorting their kids home from school – Will has a connection with the lot of them.

It doesn’t take long for someone to mention what’s been on Will’s mind all week.

“I’m sorry about what happened to your flags,” said one neighbour as she approached her steps. “What a bunch of jerks, eh?”

For more than three years, two pride flags have decorated Will’s front entrance – a large one underneath the second storey window and another flying from his front railing – but late last week, someone began tearing them down.

Not only were his flags torn down on two separate occasions – first on Thursday night, then again on Saturday night – but the word “fag” was written in chalk on his front door, and on Monday morning someone yelled that same derogatory word at him through his open front door before running off with the replacement flag he’d purchased the day before.

“10:15 in the morning,” said Will, who has been vigilantly replacing the flags as they’ve been taken down, not one to cower to bullies. “Broad daylight. I’ve had pride flags all of the years I’ve lived here and I’ve never had a problem. And then this starts happening … It’s mindless. It’s a violation of my space.”

For Will, a gay man living with AIDS who has lost most of his eyesight, the experience of being harassed and having his home targeted has been jarring to say the least.

“I’m being targeted and I don’t like it,” he said. “I have enough problems with my health and with my eyesight, I’m really not looking for any more problems here.”

He’s reported the incidents to the police and to his community housing board, and says the response from officials has been supportive and swift, with an investigation launched and extra patrols of the neighbourhood. He’s also requested a security camera for his front door.

Just as supportive and swift has been the response from the broader community. Will’s friend Sandra posted a note about Will’s experience on Facebook on Monday afternoon, and within what felt like minutes dozens of people were writing notes of encouragement and expressing outrage. Those posts quickly turned into action, with a plan hatched to purchase a batch of pride flags for people to fly from their homes and a mini-rally tomorrow in Will’s honour.

“It’s actually very worrying that he would be targeted and harassed in that way, especially coming so soon after the Orlando massacre,” said Michael Rusek, a member of the Danforth and Woodbine Pride Group who helped to organize tomorrow’s event. The group has purchased a large flag to replace Will’s damaged one.

Rusek said he moved to the Danforth and Woodbine neighbourhood with his partner Eric three years ago, and has had “nothing but good things to say about how welcoming and just plain nice everyone has been. If you walk anywhere in the neighbourhood, you’ll inevitably see many pride flags hanging up outside people’s houses. I’m a big guy, but there are some parts of the city where I might be a bit nervous holding Eric’s hand. But not here.”

Will tends to agree. “There are pockets of people who look inward and are not very inclusive, but by and large it’s a fairly left-of-centre community,” he said.

That feeling has been underscored by the outpouring of support the community has shown him over the last couple of days.

“Holy cow. Really? I’m very touched. I don’t know what to say,” said Will Monday evening, when he learned what people were saying and planning online – he doesn’t use Facebook.

“I’m taken aback by the support,” he said. “It’s not just me, it’s the whole wider issue of homophobia. This time it has my name on it but it can have anybody’s name on it.”

Since the post went up, neighbours have been honking and giving Will the thumbs up when they see him. One woman dropped off muffins, and another man stopped and gave him a hug.

“The community’s been very supportive and I’m extremely grateful for that,” he said. “People are being really, really nice. I think people are hyper-aware about this because of what happened in Orlando. I was saying to Sandra, ‘Look, I didn’t get beat up, I didn’t get shot at, they were just pieces of cloth and some nasty words.’ But nonetheless, it’s a hate crime and it’s a violation of my space.”

No stranger to activism – Will worked with Judy Rebick and Gary Malkowski for years during his career as a deaf translator and has long been involved in gay, handicapped, and animal rights – he said he is going to attend the event tomorrow to meet in person the people who have supported him.

And there’s no question he’s going to keep flying his flags – and is happy others will be doing the same over Pride weekend and afterwards.

“It’s a show of solidarity and people feel safety in numbers. And for the gay and lesbian people who live around here, it’s comforting to know that you’re not alone,” he said.

A man we so love and respect!! Very, very proud of You Dean. Love Robin, TOLA&Holly xoxoxoxoxoxox