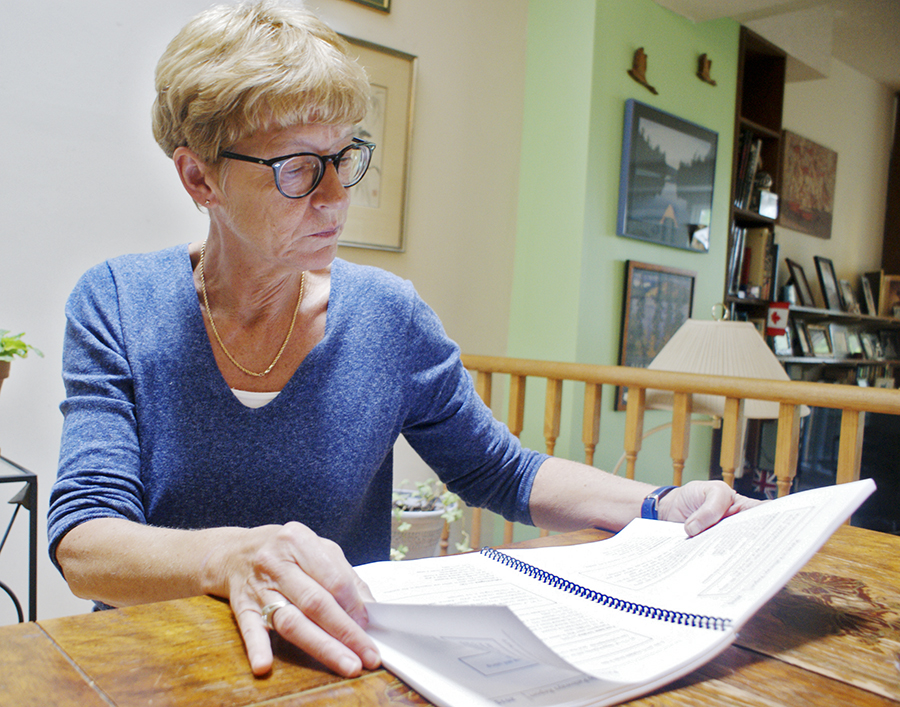 Claire McConnell reads the research report she and her son, among others, submitted to the Toronto Central Local Health Integration Network on substance recovery programs for the LGBTQ community. PHOTO: Anna Killen

When Claire McConnell meets someone she thinks she’s going to become close with, she points them to the blogs she published four years ago detailing her family’s journey.

“I can’t go through it all,” said Claire. “But you need to know this, it’s such an integral part of who we are now, you can’t know me without knowing this.”

She’s talking about the years when her son, Tim – at that time her daughter named Rachel – was deep in crisis, dealing with trauma, mental health and addiction issues.

The journey was not an easy one, but now almost a decade later, the McConnells have transformed what was the most difficult time in their family’s life into several stages of powerful advocacy work.

From lobbying the government on shortages of services and funding for mental health and addiction services for youth, to sharing their story with families in similar situations, they have found a way to use their experience to help others.

Their latest project, Pieces to Pathways (P2P), a groundbreaking peer-led substance recovery support program for LGBTQ youth, is no different.

The idea for the program came out of a conversation between Tim and his friend Geoff Wilson. The friends met in recovery, and in conversation realized that when others in the LGBTQ community would ask them for advice on treatment options best suited to those in their community, they didn’t have a good answer. There was a major gap in services that would provide a safe space for queer and trans youth seeking treatment.

Knowing this was a much-needed program, the pair asked Claire for her help getting it off the ground. Clair has worked in mental health and addictions for more than 30 years, and her experience combined with theirs provided a uniquely qualified perspective.

“It was a really good match – they’re of the population and both in recovery themselves, and know what the population needed, and I know the people to whom they should talk,” said Claire.

Over the past year-and-a-half the team dove deep into the research phase of the program, surveying agencies and literature and conducting a needs assessment study of 640 Toronto youth. They held focus groups with the intended population to see what they wanted, and launched an eight-week pilot program which gave them great insight and helped them reshape the program into something more effective.

It’s still the pilot phase, said Claire, noting the team is “still hoping to get permanent funding to implement it on a larger scale.”

But she said it is difficult because people from all over are calling P2P wanting in on the program, and they have to tell those interested that it is still in development.

But they are convinced that once implemented, their model, built from the ground up for LGBTQ by LGBTQ, will be used all over and help bring down the levels of substance abuse amongst LGBTQ youth.

A permanent, specific substance recovery LGBTQ support program is the goal, as is helping existing programs and organizations to understand that while they might believe they are LGBTQ friendly, they often have work to do.

This can be as basic as considering the admissions form for getting into an addiction program which asks, “Gender: Male/Female”.

“That’s the first point of contact the organization has with the client, and that’s the first question you’re asking,” said Claire. “Immediately the client thinks this isn’t for me, because you’re not recognizing who I am. You’re instantly shut out.”

During the study, when talking about current programming options they had taken part in, participants P2P spoke to expressed experiencing discrimination from both participants and staff, being uncomfortable with the language, practices, program content – and said they preferred treatment and found it more effective with people who had their shared LGBTQ experience.

“If somebody is struggling anyway with substance abuse for a variety of complex reasons, they don’t want this added hurdle of having to go through all of the explanations and not necessarily feeling like they’re understood, and they’re not with their peers, and they can’t be themselves,” said Claire. “It’s not rocket science.”

The addictions services community has been very supportive of P2P’s endeavour, said Claire, noting that a number of programs have allowed – or are eager for – P2P to assess their programs to see where they are at and how they can improve.

One of those programs is Renascent, a Toronto-based alcohol and drug addiction treatment provider.

“It is the opinion of those that have worked closely with them that the project has the potential to change the provincial and national conversation about addiction treatment and recovery for all people, and revolutionize the industry so that it is unwaveringly inclusive, educated, prepared and evolved to treat any individual who seeks life- saving help from any agency,” said Dennis James, acting CEO of Renascent.

“Tim and Geoff are fantastic teachers, community allies, researchers and advocates to all people in the community-based addiction treatment system in Toronto.”

They recently awarded Tim and Geoff the Peter Armstrong Community Award of Excellence, which recognizes people and organizations who have made an outstanding contribution to the field of addiction.

“You want recovery to be whatever the person wants it to be,” said Claire.

For more information on the program, including how to donate, visit https://piecestopathways.com/.

Thanks! Tim and Geoff were interviewed by Andrea Gordon from the Toronto Start yesterday and there should be an article about them in the Star this coming Monday (first day of Pride week).