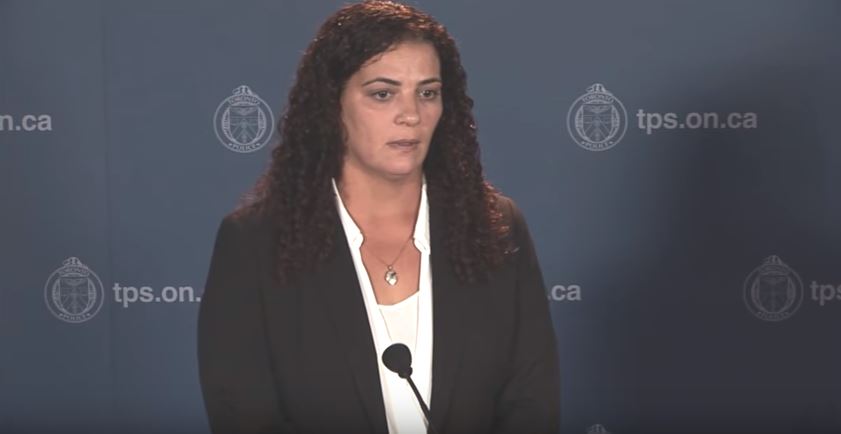 Ana Pavoa, the mother of 17-year-old Joseph Petit, who was murdered in the Dentonia Park neighbourhood at the beginning of the year, speaks to media June 8, 2016.

Toronto police are offering a $50,000 reward for information leading to the arrest and conviction of the person responsible for the murder of a 17-year-old boy who was shot and killed in the Dentonia Park neighbourhood in the city’s first homicide of the year.

Police held a press conference Wednesday, June 8 to update the public on the fatal shooting of Joseph Petit, 17, who was remembered by his mother Ana Pavao at the conference as “a great son” and “a great brother” who made her proud and made their family laugh.

Petit was walking his German shepherd on Dentonia Park Avenue around 5:50 p.m. He returned the dog home, and immediately left again to meet two males outside his home. After a two-minute conversation, a struggle ensued, and one of the males shot Petit. The males then walked towards the Victoria Park subway station.

Pavao said she found her wounded son while she was walking home from work.

“I came upon my son, shot in the street … Imagine leaving work and finding your son shot and dying in your very neighbourhood,” said Pavao. “I called 911, and had I not been there, my son would have died alone.”

Petit was taken to hospital and pronounced dead on Thursday, Jan. 7.

She said her son was a high school student who, in the fall, was given an award for kindness and wanted to join the Canadian miliary.

“A teenager, he was a high school student. Loved to cook and barbecue for his friends, be with his family, he loved to enjoy life. He should have been able to live a life,” she said. “Like any teenager he had many friends … They’re grieving and they miss him too.”

Pavao and police are appealing to witnesses and those with any knowledge of the crime to talk to police.

“Joey was a great son, brother, family member and friend. His murderers do not understand the gravity of what they’ve done to our family. They don’t care. We are hoping that other people do care, and we need their help,” she said.

Homicide detective-sergeant Gary Giroux said that evidence is critical to this investigation. He said the two people involved in the incident knew Petit and he is certain people in Petit’s community have important information that could lead to an arrest.

“There is no doubt some of Joseph’s friends and associates know exactly what happened to Joseph on that particular day and will likely know the reason for the shooting taking place,” said Giroux.

“I’m asking you to do the right thing.”