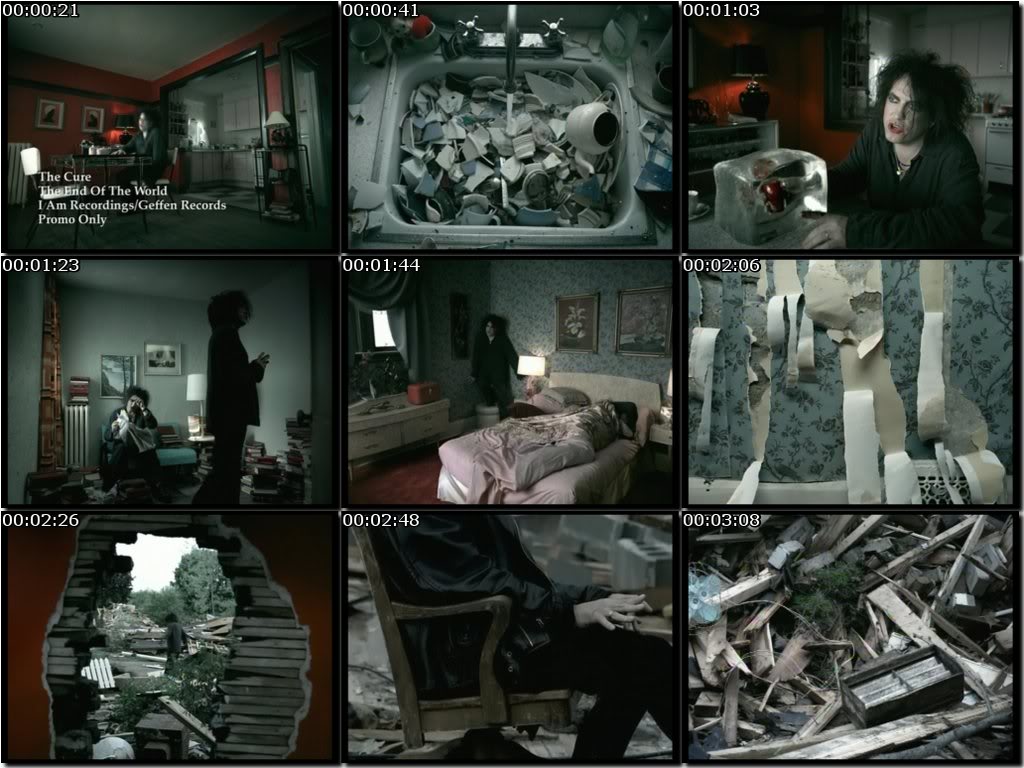 Video stills from The Cure's "The End of the World" video, shot in part at an apartment on Queen Street East and Leuty.

Music icons Robert Smith and The Cure will be in the Beach this weekend headlining Bestival, the two-day music festival taking over Woodbine Park.

As some of you may be aware, this isn’t the first time the rock stars have spent time in the neighbourhood.

Back in 2004, The Cure commandeered the apartment on the west side of Leuty and Queen to film the video for their upcoming single “The End of the World” from their self-titled album.

The video, conceptualized and directed by Toronto’s Floria Sigismondi, shows a classically angsty Smith in a house that is crumbling and collapsing on itself before eventually entering a stage of regrowth. While the video makes great use of stop-frame animation and special effects (this was an ambitious concept 12 years ago), this wasn’t a complete CGI affair, with the crew taking apart one of the apartments in the Queen Street East building during shooting – think: tearing down walls, ripping wallpaper, smashing holes in everything – and demolishing two old military homes.

“The video is about disintegration of a relationship,” said Sigismondi in a 2004 MTV2 special called “The Cure Makes a Video” which premiered the video and gave viewers a peek behind the curtain as to how the video was made. “The house and domestic life is represented by the house, and the conflict is with the house – the house sort of gives Robert problems. It moves, it comes to life, and it starts to fall apart.”

The shoot took place over three days, with the main exterior shoot held at CFB Downsview – it involved demolishing two houses and procuring a healthy amount of scrap lumber.

“It was weird because it was a Canadian air force base,” said Smith in the MTV2 show. “And I think my father was based there actually because he was in the RAF and the lot of them came over for training.”

While the video doesn’t show Queen Street, the making-of shows glimpses of the corner of Queen and Leuty as it was then, and takes us inside the apartment building where the interiors of the video were shot.

“We set out to find a location we could actually destroy. Rather than building destroyed walls, it made more sense to find a location where we could smash holes in the wall and knock down walls,” explained art director Sue Tabbutt to MTV2. “We actually blew out a wall into the kitchen to make it look more like a one-room apartment.”

At the end of the special, a local street musician performs for Smith after dark, thanking him for his music before getting back to her guitar.

That corner of Queen Street has changed over the last 12 years – the apartment building has for several years boasted a sign noting it’s been renovated – with a number of the stores briefly seen in the making of video long gone.

Were you in the area when the video was filmed? Tell us your memories in the comments.

The Cure Makes a Video part one: