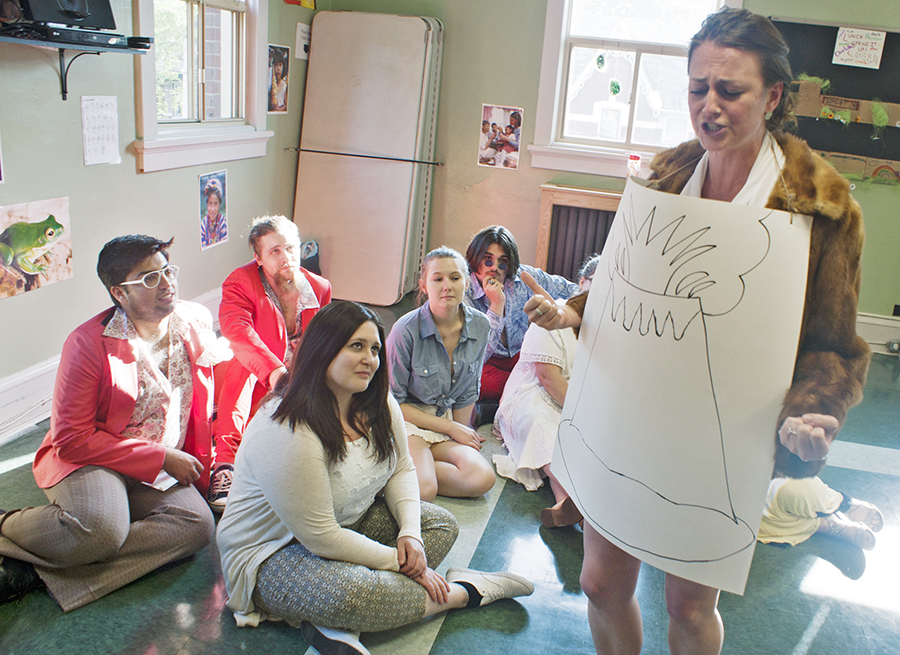 Bard in the Park producer and actor Melissa Beveridge, right, rehearses a scene with cast members of ‘Love’s Labour’s Lost.’ The play will run at Norwood Park on June 2 and 3, then move to Kew Gardens with performances from June 13 to 19. Photo: Anna Killen

The Beach’s favourite Shakespeare troupe is back and ready for another summer of Bard in the Park.

The group of East End theatre lovers’ 12th season will feature Love’s Labour’s Lost, running for two nights in Norwood Park and then for a week in Kew Gardens.

The comedy’s plot focuses on King Ferdinand and his entourage, who ban the company of women while studying and fasting for three years, and the women who shortly arrive at his gates, led by the princess of Aquitaine.

Of course the arrival of the women upends life for the men, who proceed to offend the arriving party with their initial rude welcome.

The women proceed to “use the men’s affections to their advantage and playfully torment the men by engaging them in a philosophical and hilarious battle of wits,” according to Bard producer Melissa Beveridge.

Bard in the Park’s production has been translated to the 1970s, and offers a chance to use Shakespeare’s comedy to take a close look at “gender roles and expectations, their relationships with each other and the opposite sex and the value of loyalty within love and friendship,” says Beveridge.

Bard was founded by Beach actor, teacher, director, producer and citizen of the year Anne Butler, and taken over by local theatre lovers upon her retirement in 2011. The non-profit company is supported by Community Centre 55, and produces one Shakespeare play every year.

Love’s Labour’s Lost will run at 7 p.m. on Thursday and Friday, June 2 and 3, at Norwood Park, near Main Street and Gerrard Street East.

The play will then move to Kew Gardens for performances at 7 p.m. from Monday, June 13 to Saturday, June 18, and at 2 p.m. on Saturday and Sunday, June 18 and 19. Performances are free, but donations are welcome.