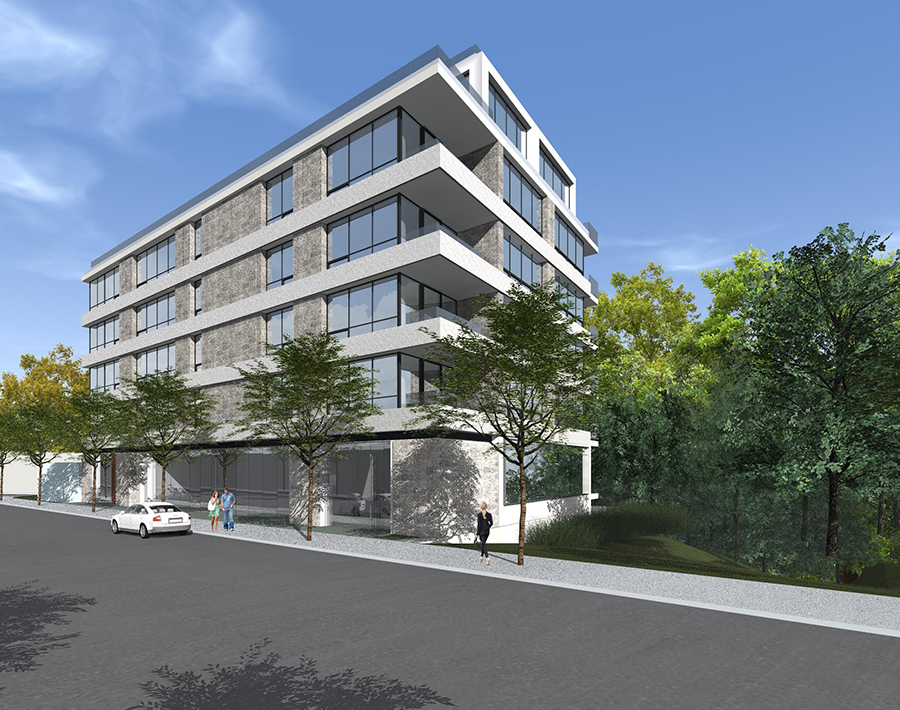 A rendering of the proposed 29-unit development at Kingston Road at Beech Avenue. PHOTO: Alliance Architects

A skeptical and at times vocal crowd packed Beach United Church on April 25 to hear plans for a proposed seven-storey development that would face Kingston Road at Beech Avenue, backing onto the Glen Stewart Ravine.

Before the meeting even began, opposition to the 29-unit development was building, with a petition created by Friends of Glen Stewart Ravine in circulation and online discussion taking place several days prior to the meeting.

“I’ve seen the petition and I’ve heard from many of you,” said Ward 32 councillor Mary-Margaret McMahon as she opened the meeting. “Glen Stewart Ravine is near and dear to many of our hearts. As a big environmentalist I’m very anxious to hear what Toronto Region and Conservation Authority (TRCA) has to say about the application. In this case, we’re lucky we have another eco-layer of protection to this area, in addition to forestry, and we don’t always have that with our areas.”

City planner Leontine Major said that the city has had the developer’s rezoning application since June of last year and it has been circulating through city departments, as well as TRCA. When TRCA reviewed the initial submission, they said they would not recommend the development as it was submitted. The city would not generally proceed with an application TRCA objects to, explained Major afterwards, because the developer would require a permit from TRCA, obtained at the time of a building permit.

Since last year the applicant, Martin Rendl Associates on behalf of owner Gabriele Homes Ltd., owned by Frank and Rick Gabriele, has been working with TRCA as well as city ravines staff to change their proposal to make it more compliant with city standards and best practices with regards to environments like the Glen Stewart Ravine. Major said that while TRCA and ravine staff have not submitted formal comments yet, they are encouraged by the changes made to the proposal and call them a significant improvement over the initial submission. Their formal comments will be included once the developer incorporates further feedback, including comments from the April 25 community consultation, and submits their next proposal.

As presented by the developer’s architecture firm Alliance Architects at the meeting, the development features ground floor retail and six floors of various-sized residential units on top, with a green roof and levels of balconies and rooftop spaces. Two floors of underground parking – 29 spaces – would be accessed using a car elevator. Landscaping developed in accordance with the conservation authority, preserving a large oak tree, would make up the back slope of the property that backs onto the ravine.

Public access to the ravine from Beech would still be available as those portions of land belong to the city.

Project architect Rob Cadeau said that following consultations with the city and TRCA, plans have been scaled back from the initial proposal, with the building now proposed for only the area of the property where houses already exist – there are four bungalows on the site currently.

The developer is also now proposing giving part of the plot at the rear of the property back to the city for the expansion of the ravine.

Cadeau noted they have hired the same geotechnical engineering firm to study the site that was hired by the city when it rebuilt the base of the ravine, to make sure the building wouldn’t impact the slope of the ravine.

“In their opinion, the proposed building will not destabilize the ravine.”

Many of the nearly 100 people who attended the meeting expressed astonishment that the proposal would be considered by the city. Some were surprised because of the proximity to the ravine and the portion designated a heritage site, others because it is at odds with the property’s bylaws.

The property falls under the city’s ‘neighbourhood’ zoning category, meaning buildings can have a maximum height of four storeys, although city staff pointed out that the properties directly across are designated ‘mixed-use’, meaning taller heights and greater density are permitted.

Major explained that the lots where the development is proposed are private property and the developer has a right under provincial planning rules to request a bylaw exemption – and the city is bound by law to consider that proposal.

To comments expressing frustration that the city has conducted a comprehensive study of Kingston Road as a whole in order to consider the impacts of the various developments together and come up with guidelines, Major suggested that residents should be careful what they wish for.

“As city staff, in looking at Highway 2 as the first highway through the city, we would probably make (Kingston Road) an Avenue … so this type of development would be more as-of-right,” said Major.

“The study might say that this scale of development is appropriate throughout Kingston Road, and the question is, do we want to go there, or do we want to deal with these development applications on an individual basis?”

One audience member said that her property backs onto the ravine and that if she wants to do anything to her property it is nearly impossible to get official permission.

“If I want to do anything to my lot, the loopholes I have to jump through are intense and most of the time they get turned down,” she said. “It sounds like you’re about to allow a seven-storey building to set a precedent for this ravine and we’re just going to have a corridor all the way down the ravine.”

The back and forth between audience members, Major and Cadeau touched on a number of subjects, including protecting the local bird population, parking, a right-of-way that would be used to access the parking garage off Beech Ave., the importance of the ravine as unimpeded green space in the city, pressure on city services like water, and Toronto’s growing population and densification plan.

The final speaker, Debra Hayes, a renter in the neighbourhood who said this was the first time she had been to a community consultation meeting, said she appreciated the thought that went into the developer’s proposal, but she doesn’t think the ravine is the right spot for the building.

“I actually live at the corner of Queen and Kingston Road in a low-rise condo building. I don’t have a garden, I don’t have a balcony,” said Hayes. “I treasure places like the ravine. That’s where I go to find my solace, my mental health. To me, this project is going to be great for the 29 people who might end up living there, but for the community, the extended community and the impacts environmentally, it’s not a good thing.”