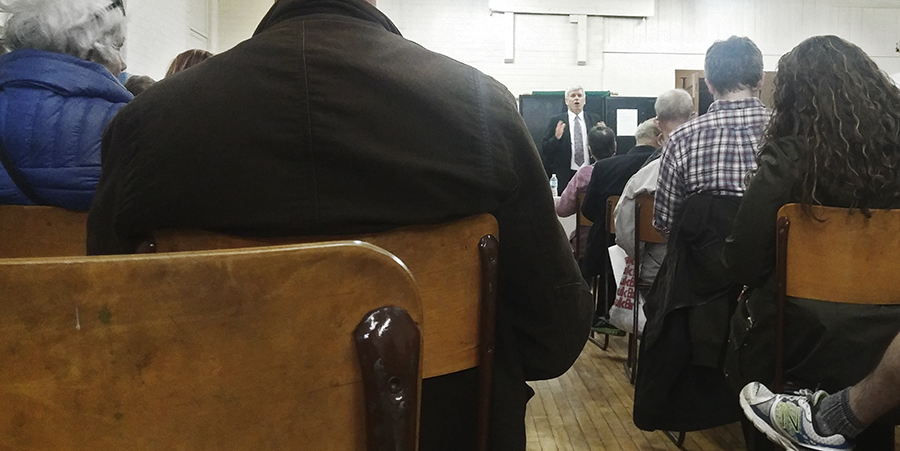 Transit users and East End residents gathered across the street from the Main Street subway station, just up the road from the Danforth GO station, to give Ontario transportation minister Steven Del Duca and Beaches-East York MPP Arthur Potts input on transit on April 18.

Del Duca noted in his opening remarks how impressed he was with the number of people gathered to talk about transit.

“It’s quite extraordinary and quite encouraging to know that there is a ton of passion in this room,” he said.

Potts talked about his excitement over the initiatives and pilot projects already in place, while acknowledging that the work that is starting is long overdue, after decades of inaction from all stripes and all levels of government.

Discussion and questions at the meeting covered a wide range of topics, from unofficial pathways accessing Danforth station and the possibility of a kiss-and-ride dropoff to the plans for a downtown relief line subway and the process of installing new track along the Lakeshore East rail corridor.

A number of crowd members brought their own suggestions for the most efficient choices for various rail and subway routing options. Del Duca responded to those suggestions for sweeping change by reaffirming his belief in the need to adhere to existing plans and schedules.

“We’ve been paralyzed in this region by an inability to make a decision and stick with it beyond election cycles,” he said.

He emphasized the province’s desire for action sooner rather than later on existing plans, stating that the input the province is looking for is for the next wave of transit projects, not those already underway.

One question was about whether transit development could keep up to the pace of residential development in the city.

Del Duca said the province tries to talk to municipalities to ensure the right kind of expansion is done in the right place. However, political changes in priorities can sometimes make it seem the right balance of where and how isn’t always hit.

“Sometimes you kind of have to hope that your municipal partners are coming to the table with a plan that makes sense,” he said.

Several homeowners asked about whether expropriation would accompany expansion.

“I would say that there definitely are going to be expropriations,” said Erin Moroz, community relations and communications director for Metrolinx.

However, specifics are not worked out yet, she said, and the process in place will see anyone affected contacted early in that process.

Del Duca said the province’s plan remains to provide 15-minute service all day on the Lakeshore corridor, and that milestone should still be attained within the decade.

Potts pointed out that some people might not realize electrification of the rail line means overhead wires, but he looks forward to seeing them.

“To some people they may be ugly. To me, that’s progress, baby.”