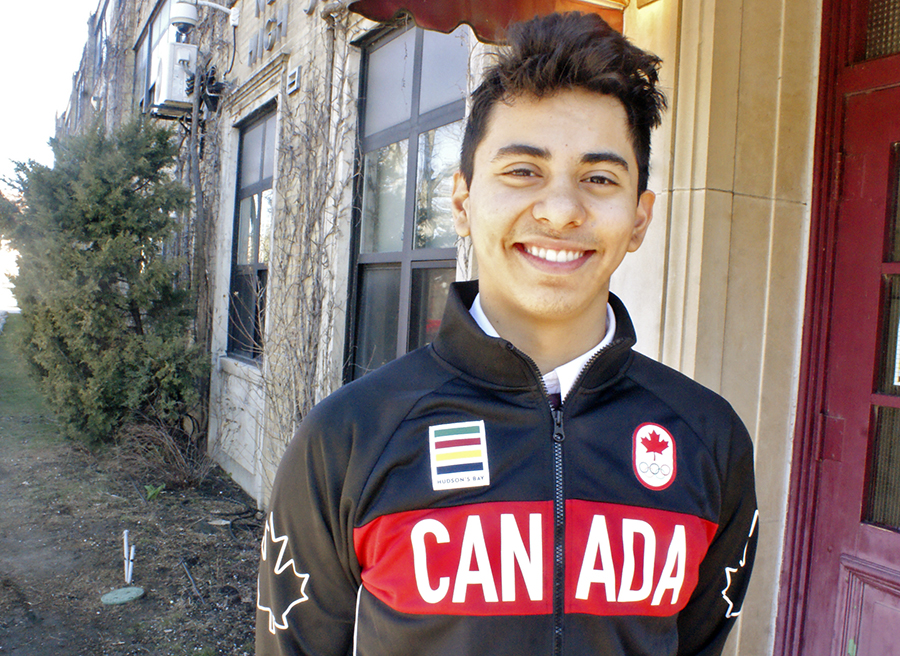 Neil McNeil student Javier Acevedo will be swimming for Team Canada at the Rio Olympics this summer. PHOTO: Anna Killen

A competitive swimmer for nearly a decade, earlier this month he became the first man to earn an Olympic nomination at the Team Canada trials and will be heading to Rio this summer for the 2016 Olympic Games.

“I’ve been dreaming of this my whole life,” said Acevedo, sitting in the cafeteria at his high school, Neil McNeil Catholic School on April 14, exactly a week after he touched the wall first during the men’s 100m backstroke trial.

Acevedo has been on the national swimming scene since he made the Canadian Junior Team at 14.  Last year he marked another stepping stone at the Junior World Championships and was named Swimming Canada’s Junior Swimmer of the Year for 2015.

His winning time of 53.67 during the trials, held at the Toronto Pan-Am Sports Centre April 7, was nearly a national record – it was 0.04 off the mark set by Pascal Wollach in 2009 and easily under the Olympic qualifying time of 54.36.

And it was faster than his personal best – he said he dropped 1.5 seconds at the trials.

He chalks up his continued improvement to a rigorous focus on training and learning from the older swimmers around him.

“My training improved so much – I started doing weights and I started to compete at practice. I had the older guys trying to teach me and to become faster. It was just training, big time,” he said.

His parents and grandparents were in the stands for his win – Acevedo said he’d never seen his father or grandfather cry and the whole experience was surreal. He’s going to give his two free tickets to the Olympics to his grandparents “because I just love them so much” and his parents and sisters will come cheer him on as well.

Acevedo has already spent time in the water with some of his teammates.

“All four of us, the youngest four on the team, we broke the junior world record at world championships. It was pretty cool for all of us to make it back and on the senior team now,” he said.

“It’s definitely a good experience for me and I’m going to learn from the best athletes at the top and just learn how to handle myself and hopefully make it to another Olympics.”

But in the meantime, he still needs to finish high school – he’s going to the University of Georgia next year and will swim with their team. He’s made the honor roll in the past and said, “I want to keep my academics high because there will be an end point to my career – I need to keep my school academics part of my life because that’s something I’ll be using 30 years from now.”