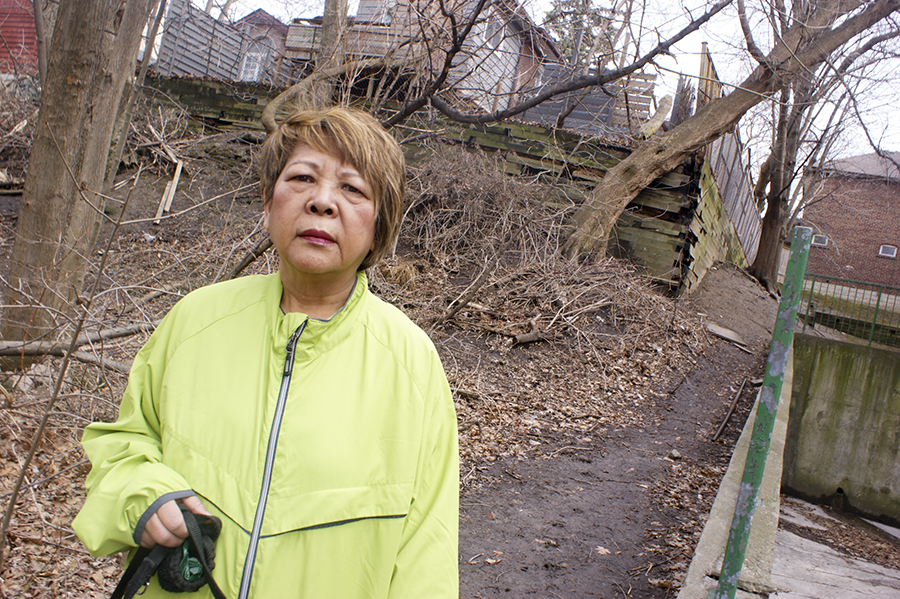 Joan Eskins with the retaining wall she's been ordered to repair or replace at her recently-purchased Beach Hill home. PHOTO: Anna Killen

Joan Eskins is not one to shy away from a little home improvement. A lifelong Torontonian, the petite, detail-oriented woman owned a home decor store on Queen West before retiring and moving to Oakville, where she spent several years renovating a spacious, mid-century modern bungalow.

But when she and her partner decided to downsize and move back to Toronto last year, she wanted a space that wouldn’t take too much work to bring up to standard – instead planning to spend her free time travelling, making new friends, being a grandmother.

“My partner and I walked in and said, ‘Well this is really cute,’” said Eskins, of the Beach Hill home she purchased. “Everything is done.”

The home, which she viewed at an open house on a Saturday in November of last year, was one of several she’d visited since she began seriously looking about six months prior. She had put in an offer on one of the houses she’d liked, but her bid was a few thousand dollars short.

“We lost out because of the fierce market,” she said. “So when we came to this place, I said, ‘OK we should put in a good offer.’”

That good offer ended up being more than $100,000 over the asking price, with no conditions attached – meaning she wouldn’t be commissioning her own inspection of the home. The seller had provided a 2013 survey and 27-page inspection report, which she went through and said looked fine.

Eskins and her real estate agent presented her offer the day after she first viewed the house in what’s known as a ‘bully offer’ – a pre-emptive bid submitted before the advertised date of sale – and won out over three other similar contenders. At the open house, she had been told there would likely be other pre-emptive offers coming in on Sunday – the listing notes that pre-emptive offers would be registered and considered that day at noon – so she and her partner met with her realtor to strategize what they needed to do to get the property.

“These days you lose out if you have any kind of conditions on an offer,” she said.

Anecdotally, in Toronto’s hot real estate market, Eskins’ two-day home buying experience, her offer above asking, her waiving of conditions, is not uncommon. Earlier this year, Beaches-East York MPP Arthur Potts stood in the legislature and described his experience buying a home in the Beach – he saw it on Friday, again on Saturday, and had an offer in Saturday afternoon that was above asking and didn’t include a condition for a home inspection.

“If I had to wait around to get a building inspector to take a look at it and reassure myself that it was worth the money, I never would have got it. So we just jumped right in,” he said.

Potts said he had a secret – his real estate agent used to be a builder, and he walked Potts through the house and did a check from that perspective – but some buyers who jump right in and get caught up in the emotion of a fast-moving housing purchase might later find themselves wishing they had slowed down and had a clearer understanding of waiving conditions.

That’s where Eskins sits now. Not three days after moving into her house in late January, city officials were at her doorstep informing her that they had received a complaint about a retaining wall on her property – a retaining wall she said she did not know was there until the city officials told her – and that she would have to repair it or replace it.

The last two months have been a headache of bureaucracy and financial stress for Eskins, navigating several city departments, including ravine protection and tree removal – the property includes a ravine in the backyard and several large trees. Estimates for the work range from $47,000 to more than $100,000, she said – money she had saved for her retirement nest egg.

Eskins said if she had known about the retaining wall, she probably would have lowered her offer or walked away. She said she knows she has to take responsibility for the situation. “I was so enamoured of the place … I didn’t walk down to the ravine and look up.”

But just because she wishes responsibility could be shared between the other parties, that doesn’t mean she has much in the way of legal recourse.

She’s considered filing a complaint with the Real Estate Commission of Ontario (RECO), has been in contact with the home inspection company, and has discussed other legal options with her lawyer, but because she signed off on the offer and real estate cases are expensive and often difficult to prove, her lawyer has advised her that her chances of winning are slim.

“It really is ‘buyer beware,’” she said.

Caveat Emptor – buyer beware – is the guiding advice behind all real estate transactions. While a buyer or seller hires an agent or a home inspector to provide guidance and expertise, at the end of the day, it’s the buyer who shoulders the risk, particularly if they waive conditions in their offer.

“In hot, hot markets, buyers can sometimes be their own worst enemy,” said Joe Richer, registrar of RECO, the body that regulates real estate agents in Ontario. By waiving a home inspection and other conditions, “you’re waiving your right to protect yourself,” he said. “Consumers get caught in that they just want to win the house, so they may over-extend themselves, they may waive conditions of a home inspection, they may waive financing.”

Looking back, Eskins wishes she had insisted on her own home inspection, even though she’s fairly sure that would have meant losing the property. The 27-page inspection report makes no mention of the retaining wall on the property – a fact that Eskins can’t quite wrap her head around.

“There’s no mention of it whatsoever,” she said.

Murray Parish, president of the Ontario Association of Home Inspectors (OAHI), does not seem surprised that the retaining wall was not mentioned – they can fall into a grey area depending on their relation to the house. “Every case is different,” he said. “If I see a retaining wall on a property, I usually report on it. It’s more of a standard of care than a standard of practice. If it’s holding up the part of the house, that would be an issue.”

Standards for home inspectors vary by association – there are several in Ontario, including OAHI, which has protocols for education, workplace safety, and discipline in place – but there is not one overreaching licensing body for all home inspectors.

That didn’t seem right to Trinity-Spadina Liberal MPP Han Dong, who introduced a private members’ bill earlier this year calling for the mandatory licensing of home inspectors, with mandatory liability insurance and a common authority to regulate and enforce standards of practice. His bill has received widespread support at Queens Park and is expected to become law.

Parish is in favour of the bill, noting that OHIA already has regulations in place for its members and would welcome them becoming province-wide.

“Home inspectors are supposed to look at it physically, not emotionally. And buyers look at it emotionally … which is unfortunate in a bully offer situation,” he said.

Does it matter to the story that Eskins is “petite”? If the home-buyer was a short man, would you have used the word “petite”? C’mon, Beach Metro, this is a Journalism 101 no-no.

This is a prime indication of why Home Inspections should be mandatory.

As I see it, this is another attack of the Home Inspection profession. Yet reading this it appears that Eskins had a Realtor who was selling a property and didn’t disclose defects. Realtors are bound by law to disclose material facts about a home.

Realtors frequently suggest their clients waive the home inspection based upon the supposition it would lose the home. The Realtors are supposed to provide fiduciary responsibility. 580/05 s8.1 and s8.2 clearly indicate that the Realtor, who does not have the skills to perform a service should advise their clients to have a third party perform the service.

This includes a home inspection.

Losing a home is not a valid reason, fiduciary or otherwise, for waiving an inspection that could save thousands of dollars or a life.

The Bill put forward by Mr. Han-Dong MPP for Trinity-Spadina is long overdue. The self-regulation of the profession offered by the Ontario Association of home Inspectors since 1994 has patently failed, and it’s time a government regulator, with adequate teeth to get rid of errant inspectors is formed.

Extending the already failed model of OAHI across the province would just be extending the problem we have today. Mr. Dongs approach, which is in-line with the Ministry of Government Consumers recommendation paper to regulate the profession is the right way to go, and it should be done at all speed.

One thought is that the buyer paid $129,000 over asking , so whats another $100K for the retaining wall? Unfortunately home inspections on resale homes have virtually disappeared in the GTA this year, and the market is getting accustomed to it. Its only when high ticket defects are found that the relevance of a home inspection is discussed.
Any decent home inspector would have discussed that retaining wall early in the inspection on the first exterior walk-around, identified the potential high cost repair, and advised the client to determine ownership and responsibility for the wall with their lawyer.