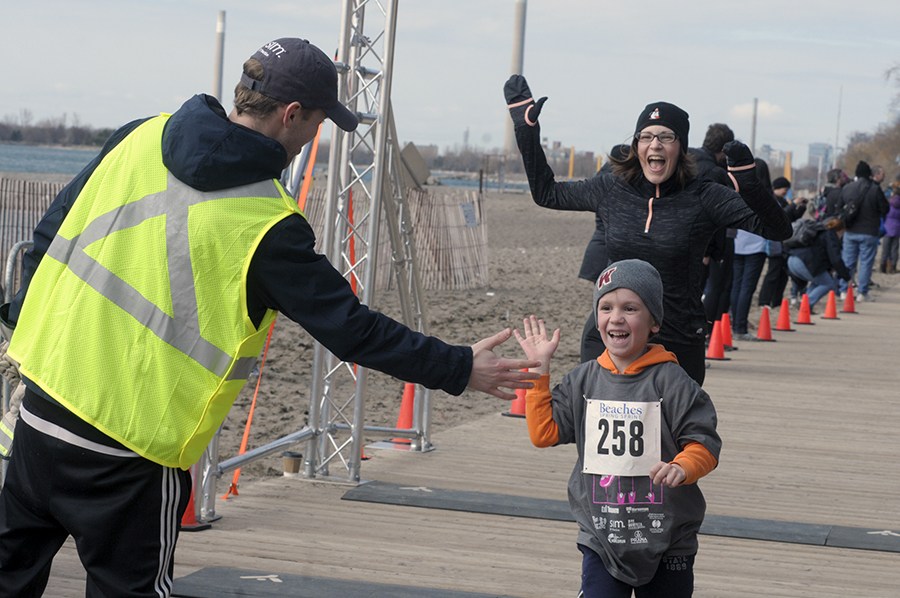 Hundreds of runners and supporters came out for a colourful 29th annual Beaches Spring Sprint on April 2 at the Balmy Beach Club.

Sixty volunteers were on hand to assist the event, which saw 450 people run or walk the 5 km or 2 km boardwalk route – that’s down from the 550-plus the race typically attracts, but still a healthy crowd.

Athletes and their supporters were treated to a beautiful morning of mostly sunny skies before winter conditions returned in the afternoon.

When clouds threatened to dim the children’s race, master of ceremonies Frank Domagala led the children at the starting line in a cheer to conjure the sun. By the time the racers took their marks, the sun was out, shining bright until the final kids crossed the finish line.

Kent Lindsay finished first overall in the 5K Walkers Race with a time of 31:05.

Ricci Balogh surprised herself and finished first in the 2K Seniors Walk, saying “never in my wildest dreams did I expect to end up with a gold medal this year.”

Fiona Pavlovska crossed the finish line first in the children’s 2K race, with Andrew Watson close behind in second overall, and first for the boys.

The youngest participant was 14-month-old Finn Warner Willis, with 88-year-old Yvonne Walmsley clocking in as the oldest participant.

For full results, see here and see pictures of the event, below: