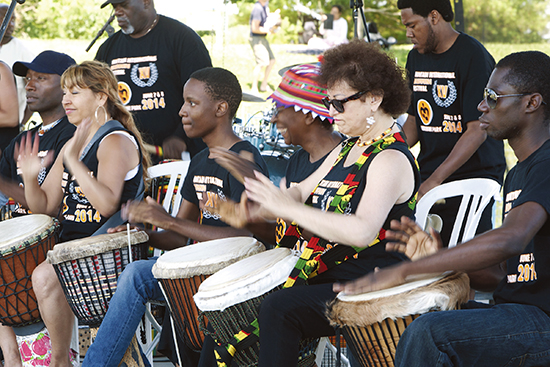 The Muhtadi World Drummers take the stage at the 2014 edition of Afrofest. Performances will run for two days this year, reversing an earlier decision by the City of Toronto to cut the festival by a day. PHOTO: Beach Metro News file photo

Tensions between the City of Toronto and Afrofest have eased and the popular African music festival will once again be allowed to operate as a two-day festival, reads a joint statement released by the parties last night.

Councillor Mary-Margaret McMahon, the City of Toronto, and Music Africa – the company that operates the Woodbine Park festival – met with other interested parties yesterday to discuss the city’s decision to cut the festival from two days to one, citing noise and compliance complaints over the last several years. The decision was met with public outcry, and a petition was circulated to pressure the city to reverse its decision.

The parties “are pleased to announce that an agreement has been reached to grant Afrofest a permit for July 9 and 10, 2016 in Woodbine Park,” reads the statement. “All parties are committed to working together to ensure Afrofest is successful this summer and in future years.”

Both sides admitted they could do better.

“Afrofest organizers acknowledge that there were some permit violations related to past years of the festival, and the city admits to unclear communication regarding permit end times. With this agreement we look forward to a positive future for the festival and are committed to including Afrofest in the cultural and musical landscape of Toronto,” reads the statement.

Toronto Music Advisory Council has also come on board to “help ensure the success of Afrofest and other music events across the city.”

Speaking last night, councillor McMahon said she was relieved the parties could have a frank discussion with a positive outcome.

“We had a really great, frank conversation,” she said. “We all admitted we had a part to play in the situation that unfolded … we did a joint statement and a ‘hip hip hooray second day’.”

She said she doesn’t believe there will be compliance issues again.

“I think there is absolute commitment all around, and also commitment with the city,” she said.

What an absolute joke! The race card gets played and the City backs down from enforcing the rules against a serial offender. And folks, it’s not about noise, it’s about Music Africa’s blatant disregard for the terms of its permit. Now that the organizers know for sure that the City isn’t serious about enforcing its rules, the gloves will be off and it will be a free for all this year.