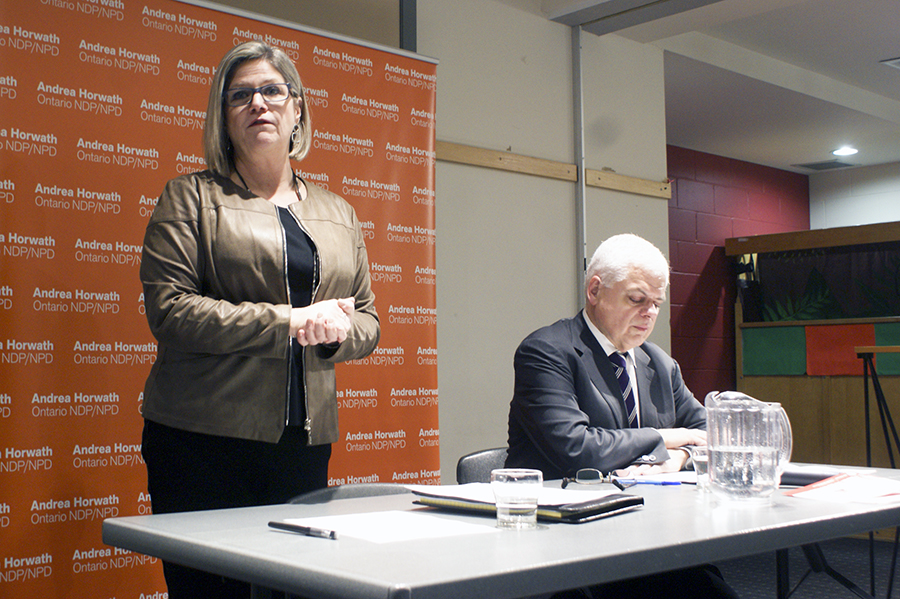 The provincial NDP are aiming to channel what they believe to be a strong current of public opposition to the government’s Hydro One privatization plan into a campaign that forces the Liberals to change course, while simultaneously reinvigorating the NDP.

Nearly 75 East End residents – most apparent NDP supporters – turned out for a meeting at the Coxwell and Danforth library on a snowy March 1 to hear from and give feedback to Toronto-Danforth NDP MPP Peter Tabuns and opposition leader Andrea Horwath on the Liberal plan to sell a majority percentage of the Ontario government-owned electricity authority.

That plan calls for 60 per cent of the $6-billion-a-year corporation’s shares to be sold, with the government maintaining that it would remain the single largest shareholder and that the money from the sale would help pay for infrastructure projects.

NDP MPPs have been speaking with constituents and hosting similar meetings across the province, and the message Horwath says they hear from attendees is the same: they are not in favour of selling off a public resource.

“I’ve been going door-to-door in my riding since January on this issue, and last year I was talking to a lot of people about the sale of Hydro One as well,” said Tabuns. “It’s not a popular issue at all.”

That appeared to be the case at the March 1 meeting, with a number of residents raising numerous and broad-ranging concerns and questions about the plan while also providing suggestions on how to organize and push the government to stop it.

Rising energy costs were a major concern, not only for low-income residents and housing groups, but for local businesses.

Some questioned why the province would sell off a dependable source of yearly revenue that could pay for education, health care, and community programming.

Others wondered if anything could be done to reverse the plan – and get back the 15 per cent of shares that were part of the initial offering last fall – or if public opposition was falling on deaf ears.

“We have to stay vigilant, letting the premier know she shouldn’t sell off this public asset,” said Horwath, adding it was important that constituents keep up the pressure on their area Liberal MPPs.

Horwath said the opposition was focused on getting the government to hold at the 15 per cent of shares, adding that it would likely be more costly and difficult for a hypothetical future NDP government to reverse the sales if it were at 60 per cent.

One audience member said he had been emailing with Beaches-East York Liberal MPP Arthur Potts’ office on the issue, and was dissatisfied with the “boilerplate” response he had been receiving.

“I sat on the gas plant inquiry and I got to read the emails from the MPPs’ offices to the premier’s office, and they were like, ‘Can’t you do something about this gas plant?’” said Tabuns. “They had all of their standard letters that they send out to constituents, but what they sent to the premier was, ‘We’re getting killed here, you’ve gotta do something.’ So they may put up the very friendly, there’s nothing to see here front, but when they get enough, they feel it and they yelp really loud.”

But the meeting also provided a chance for area NDPers, some still rattled after the party’s 2014 provincial election loss, to come together and get fired up about a cause.

“For me, I’m so disillusioned with politics right now, and I’ve always been supportive of the NDP,” said an attendee who identified herself as Shelly. “I think this is an opportunity for the party to connect a vision, to present themselves, to say what they stand for … we have to get people engaged again, so I think this should be taken as that opportunity.”

We always support for this liberal how they can do this them self very bad stll we didn’t know the proper reason why they sell the hydro we definitely reise the voice about this .we always with you.

WE DON’T HAVE TO FORGET THAT CANADA IS NOT ONLY TORONTO.!!! IN SOUTHERN.!!! ONTARIO THERE IS LOTS OF PEOPLE AGING ON POORNESS