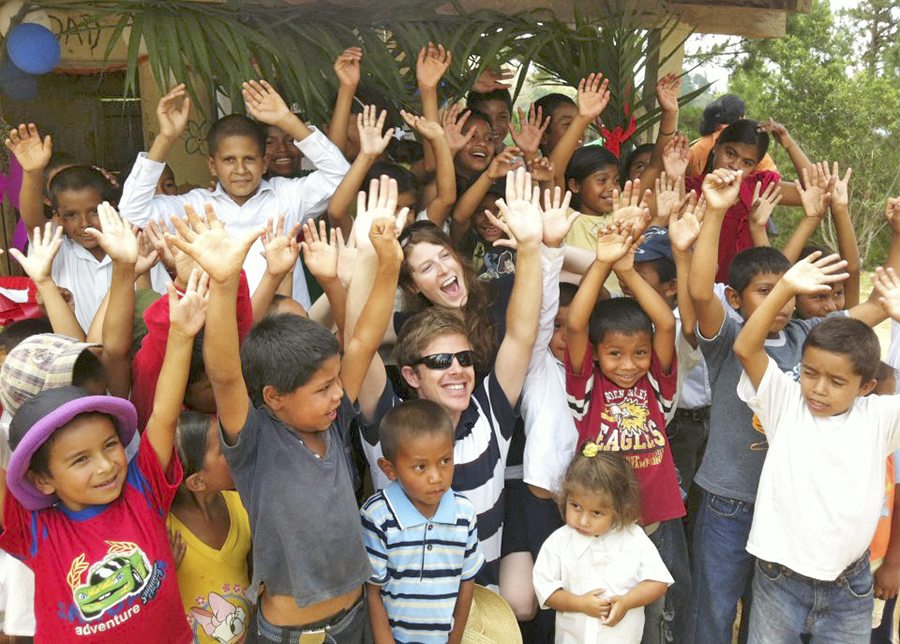 Tom Affleck and Sarah Kerr, at centre, celebrate the opening of the Equator school in northern Nicaragua, built for the children of local coffee farmers. Photo: Courtesy SchoolBOX

A Beach Hill family is in Nicaragua this month to commemorate the 75th classroom built by their SchoolBOX charity.

The Marvin Salazar School, just outside San Benito, Nicaragua, will service about 300 students from kindergarten to Grade 6, taught by five teachers. The two classrooms and supplies such as desks, chairs and a whiteboard will cost about $36,000 – a small price to pay for educating members of 150 local families.

SchoolBOX founder Tom Affleck and his wife, executive director Sarah Kerr, recently became parents for the first time. Both are quick to credit the local communities and governments for doing most of the hard work, and for continuing to promote education once classrooms have been built and stocked with supplies.

“It’s just kind of empowering them to do what they do,” said Kerr. “Without that teamwork, without the local on the ground, you can’t turn that dream into a reality.”

It’s been about a decade since Affleck first found his calling. In 2006, while working on a Canadian government-sponsored project in Nicaragua, one of the poorest countries in Central America, he encountered two young girls, and gave them notebooks and pencils. Their father replied by saying they would now be able to attend school, and Affleck saw an opportunity to help create positive change.

SchoolBOX’s first classroom was built in 2008. Land is donated by local governments, which also run the schools. The charity and its staff and volunteers build the facilities, bring in school supplies, and, perhaps most importantly, champion the importance of education.

The charity, with 500 volunteers in Nicaragua and thousands of Canadians and Americans supporting the cause in some fashion, has an impressive list of accomplishments considering its young age. Along with the 75 classrooms, SchoolBOX has renovated two classrooms, built five playing fields, 46 washrooms and 38 mini-libraries, hosted 25 soccer tournaments, and delivered close to 100,000 education packages to students and teachers. More than 16,000 students in 89 communities are supported in schools every year.

Affleck and Kerr moved to the Beach Hill neighbourhood in the summer of 2015, shortly after having their first child, who will accompany them to Nicaragua this month.

Becoming parents makes SchoolBOX’s mission seem all the more real, said Kerr, who points out in some areas of Nicaragua some parents are forced to choose between sending their children to school or buying food.

While their own child may not face that choice, neither should young ones be sheltered from the reality of other children, said Affleck.

“I think it’s really important for children to be grounded in our global reality,” he said.

While parenthood will result in the family spending more time in their own country, both still agree on the importance of having Canadians stay involved in the construction of the classrooms built by SchoolBOX.

And after close to a decade, they’ve been witness to children getting older and spreading a passion for education to the next generation of young students.

“It really is changing lives … it’s making a big impact, and it’s not that complicated,” said Kerr.