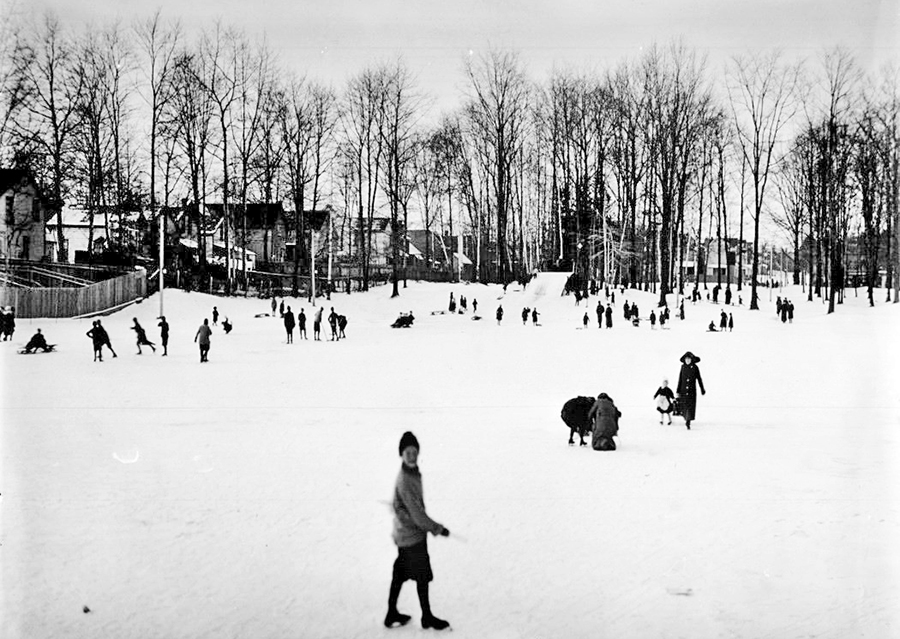 Kew Gardens has been a spot to enjoy winter for more than a century. Here Beachers enjoy the snow in 1914. Photo: City of Toronto Archives, series 372 Subseries 52 Item 249

In the city we are blessed with parks and recreation facilities, especially in the East End. There are quite a few of them, large and small. You will be surprised where some of the parks are located, and there is, in some cases, a little bit of history.

Some readers will not recognize all the names or locations, others will. In certain instances these green spaces are located near railroad tracks, in the rear of schools, or on dead-end streets or cul-de-sacs. Some of them are called parkettes, some are parks; some are named for significant people or places.

So, dear readers, here we have part one of two articles on the parks of the East End. This is not in any order of preference, I will go back and forth. Let us test your parks knowledge.

I have written recently about the Glen Stewart Ravine, a great natural park and forest running south from Kingston Road and Beech Avenue, and Ivan Forrest Gardens. At Queen Street East and Glen Manor, it has a beautiful waterfall and was named after Ivan Forrest, a Toronto parks commissioner who lived in the Beach.

I unabashedly say this is one of my favourites, a place where one can relax and gaze out on Lake Ontario and the Bluffs. It is located in Scarborough on Kingston Road, a few streets east of Birchmount Road on the south side. This park is strictly for pedestrians and flower lovers: no dogs or pets, no bicycles, no recreation of any type, only walking. It’s also one of the few parks where there is a braille map for the visually impaired. The park is about 30 acres or so, with a lovely fountain in the middle. Actually, it is a concrete waterfall that is an architectural beauty. The park is one of several gifts to the city by a prominent citizen in memory of his wife, Rosetta McClain. There is still a part of the original house standing. There is one unusual feature in Rosetta McClain for our readers to locate: a graveyard – not for humans, but for animals. Dogs and a donkey: their names are on the gravestones.

Here is a lovely park featured in a great article in the last issue of Beach Metro News about the Massey family [‘Masseys left their mark on East Toronto,’ Feb. 9, 2016]. This is a park with a creek and trees, dozens of acres that start near Danforth and Dawes Road east to Victoria Park and beyond. This was a gift to the city of Toronto and East York by Suzie Denton Massey. For more information read Jean Cochrane’s great article.

Another great park north of the Danforth, going from WoodbineAvenue to Dawes Road. A great hiking park.

Located at Gledhill and Cosburn Avenues, named after the great East Yorker Stan Wadlow, who played an important part in the development of this area in parks and recreation.

Hidden north of the Danforth – can you find it, dear readers?

A breath of fresh air located near Woodbine and Gerrard Street East on Wildwood Crescent, this little park was once the original stream-fed water table, where water was taken to the large railroad freight yards at Main Street and Gerrard to service the railroad.

This great park area was once the site of the Toronto Golf Club, the first golf club in Ontario. It was located between the St. John’s Norway graveyard and the railroad tracks, from Coxwell to Woodbine. After homes and buildings were put up a great parks benefactor and builder of the Beach, William Williamson, purchased a large acreage from the old golf course and donated it to the city.

On the south side of Gerrard at Beaton Avenue – another part of the former Toronto Golf Club.

The jewel of the East End, this 20-acre park at Queen Street East and Lee Avenue is the home of Kew Beach Baseball, Kew Beach Lawn Bowling, Kew Beach Tennis Club, and more. It was named after the famous Kew Gardens of London, England by Beach pioneer Joe Williams, who purchased the land around 1853. He settled the area and even named one of his children, Kew Williams, after the London park. Kew Williams’ house still stands at 30 Lee Ave., with a historic plaque in front.

This is the end of this segment on parks, dear Beachers. Check back in the next issue for part two of our historic East End parks series.