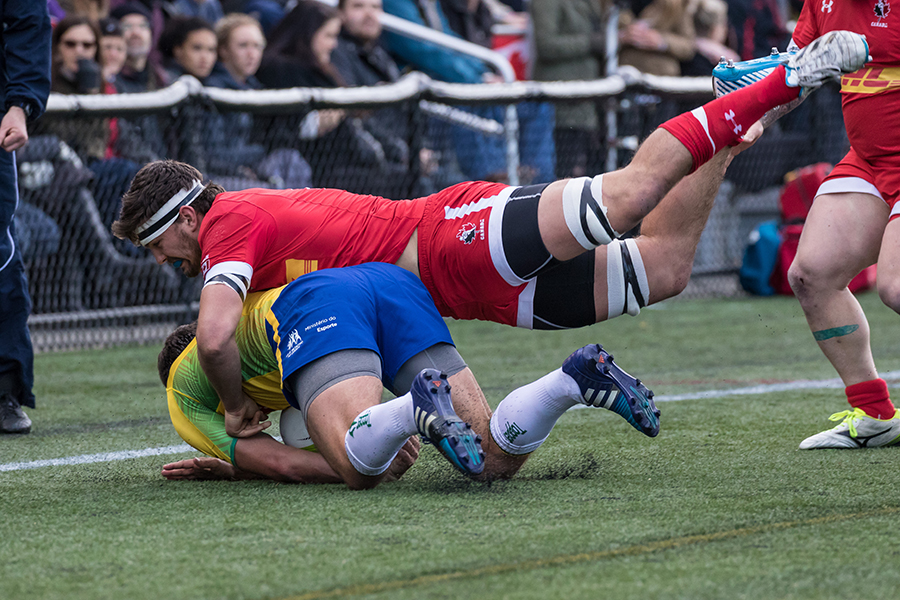 Lucas Rumball, with the tackle, and Dan Moor of the Balmy Beach Rugby Club are playing for Team Canada. PHOTO: Rugby Canada

The five-game tournament began earlier this month in Langford, B.C. and sees the six highest ranked teams from the Americas – Argentina, Brazil, Canada, Chile, United States, and Uruguay –compete through February and March. The Rugby World Cup, held every four years, last took place in 2015 – meaning this tournament is the beginning of the next cycle of players who will feed the 2019 World Cup rosters.

Dan Moor and Lucas Rumball call the Balmy Beach Rugby Club home. The two were called to represent Team Canada shortly before the tournament began and it’s been a whirlwind ever since. Canada’s national team is based at the Shawnigan Lake School near Victoria, B.C. and has been travelling and training extensively.

“I don’t think you can ever expect to get the call up,” said Moor. “It’s a pretty massive dream.”

The team kicked off the tournament with a 33-17 win against Uruguay in Langford. For a Team Canada that went winless at the 2015 World Cup, it was a major boost.

“That was a great way to start the tournament,” said Moor, who scored two tries in the opener. “Particularly because we had a short week with a bunch of players who knew each other but hadn’t played together, at least recently, if ever before. So on a short week to turn around a performance like that was definitely something that we were happy with in terms of a first step in the right direction.”

Moor said the game showed particular promise in the performance of the team’s younger players, like Rumball.

Rumball started his rugby career at Balmy Beach in the under 14 program, captains the Queens’ Gaels and last year was named Rugby Canada’s men’s young player of the year.

After the first win, the team travelled to Austin, Texas, where they suffered a 30-22 loss to the United States.

“We created opportunities but didn’t necessarily capitalize on them,” said Moor.

This past Saturday the team hosted Brazil, winning 52-25, with Rumball earning a pair of tries.

Rumball said he’s getting used to the higher level of play and soaking in as much knowledge as he can from the more experienced players.

“It’s a step up definitely from what I’m used to playing. I came through the Canada under 20 program last year,” he said. “[In this tournament] you’re playing against men at a very high pace and high physicality so for me it’s been a little bit of an adjustment. I’m really excited to be here, I’m learning every game, every training session just trying to get better up to speed.”

Henry McQueen, who plays with Moor and Rumball at the Balmy Beach Club, said the two are deserving of the opportunity.

“Dan’s a testament to hard work and it’s clearly paying off,” he said of Moor, noting that when he first met Moor when they were at Queens, Moor was “a skinny guy,” but he worked his way through the gym and the system and began to get noticed.

“Lucas is a bit different,” said McQueen. “He works extremely hard, but he’s sort of had it from day one. He showed up and was an incredible young player when he was 18. You don’t usually see guys as young as him play as gritty as he does – he’s a workhorse, a really tough player. And his position as a flanker really demands that.”

The support from the Beach is appreciated by Moor and Rumball.

“The Balmy Beach Club has been incredibly supportive,” said Moor. “The guys there are very tight like a family and there’s a real culture of supporting each other.”