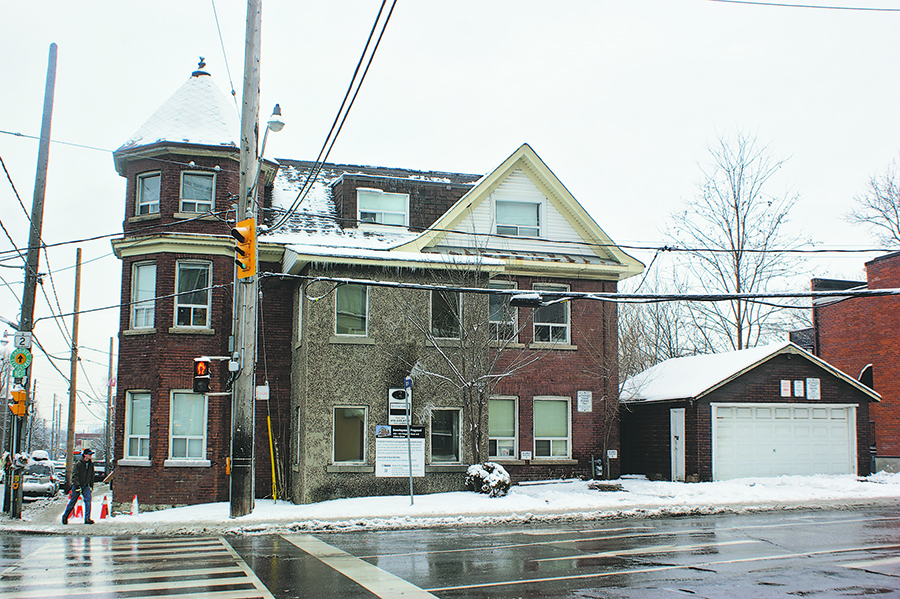 A seven-storey condo and retail development is proposed for this corner of Kingston Road and Main Street. PHOTO: Anna Killen

A number of people who attended a recent community meeting in the Beach came prepared to push back against the reason for the meeting: a proposed condo development at Kingston Road and Main Street.

The required community consultation meeting on Feb. 8 saw about 25 people turn out to the Beaches Recreation Centre to hear from city planners, staff, and project consultants and architects.

City planner Derrick Wong said the meeting, intended to provide information and gather community feedback, was the beginning of a long process and that the final decision would ultimately be made by city council.

In order to approve the seven-storey development as proposed for the northwest side of Kingston and Main, the city would need to amend several bylaws. Preliminary designs, prepared by Hunter and Associates and RAW architects, are for 75 units, 32 underground parking spots, 7,000 square feet of retail on the ground floor, and a laddered design that is scaled back as it gets taller, providing rooftop patios and units of varying sizes while reducing shadow and overlook.

An official plan amendment would also be necessary, as the Kingston-Main corner falls under the “neighbourhood” designation in the City of Toronto official plan. That designation means the building’s height is supposed to be capped at four storeys and retail space is limited.

But a number of mixed-use developments are under construction in the area and several other buildings along Kingston Road in the area are taller than four storeys.

“If you look at the other staff reports, it’s not a blank slate. It’s not meant to be every policy applicable to each site or each development proposal,” said Craig Hunter of Hunter and Associates. “But there is a pattern of six- to eight-storey buildings, some pure residential and some with retail.”

There are also detached homes, duplexes and low-density apartment buildings in the area.

“There are real constraints and real opportunities for including and creating affordable rental housing in the city,” said Hunter. “It’s the right thing to do and it’s a policy of the city. We’ll be respecting that and replacing those units.”

Architect Roland Colthoff detailed how the building would look in relation to the unusual topography of the corner which has a steep slope up Main Street.

“This corner of Kingston Road, we think, is a fairly important corner in the urban hierarchy of the city. We think it’s important to your community, we think it should be celebrated,” said Colthoff, noting that the visual emphasis of the building will be on the corner. “Brick will be a big feature of this building because that is a big feature of your area and it’s important that we reflect the context of the neighbourhood.”

Despite requests by Wong for the audience to wait until the presentation was finished before asking questions, residents raised concerns throughout the meeting.

Those concerns included parking – the development would host 32 parking spots for 75 units, nearly a third of the 92 currently required – and increased traffic in the area, with one resident noting that overflow street parking would end up on his street.

Another attendee noted the constant – and noisy – state of construction in the area, and wondered how long the development projects would go on for.

Broader concerns on the latter point and the changing neighbourhood were also raised.

Several attendees lamented the fact that the area does not have an overall plan for development.

But Wong said that the city simply doesn’t have the resources to study each and every neighbourhood. He noted that while there is development taking place at Kingston and Main it is not specifically identified by the city as a “growth area.”

That point was echoed by an audience member, who quipped during the Q&A that the push towards densification is worse in other parts of the city.

Ward 32 councillor Mary Margaret McMahon, also in attendance, responded to a question about the Ontario Municipal Board appeals process, and what residents can do to keep fighting if the development is green-lit, by noting that she has been involved in lengthy pushes against certain developments, and that the OMB process can be expensive for individuals.

“I don’t want anyone to get in the hole because of this … I’m realistic that we live in a city and we can’t stand at the corner and stop development,” she said.

“So to get ahead of it and get a development that’s in character with the neighbourhood, to get parking and traffic concerns addressed, materiality of the site, bigger family units versus smaller family units, amenities, parking restrictions, things like that is more in keeping within the realm of possibilities.”

““I don’t want anyone to get in the hole because of this … I’m realistic that we live in a city and we can’t stand at the corner and stop development,” McMahon said.

So she would rather let developers get whatever they want and never fight… and leave it entirely to the planning department I guess. But then, so far the planners lost the fight on 1884 Queen (Shell Station) and then gave up on Ho Lee Chow site opposite.

As for people getting in the “hole”, it is because she refused to back residents who object to a development and for her to get the Council to oppose condos at TEYCC that staff planners are willing to approve. People end up in the hole because they go on their own.

She used to add in “pitchforks” about people standing on the corner.

And if she is so sympathetic to people who are in the “hole”, the only persons in the hole that I know of are the people who fought 580 Kingston, and the people who fought Kippendavie, and then there is myself… and she never said anything to me about the over $60,000 claim that the 1960 Queen developer made against me (the OMB reduced this to $15,000 from $28,000, but I still appealing).

The face of this community is changing in a very sad manner. There are laws that need to be changed, especially those laws that do not require a traffic study when a devleopment has fewer than 100 units. There should need to be studies for cumulative developments, not developments in isolation.

What is the point of having a “neighbourhood” designation in the City’s official plan, with height designations and so on, if developers can so easily ignore it and the councillor and City let them?

TomK, because in this city, rules are made to be broken… or bent or exceptions to exceptions, and even an “Official Plan” is not carved in stone.

The City Planning Department has as its priority intensification. To confuse things, “Neighbourhood” with a capital N really means “low rise and low density residential” – but the Planners will say that even though this is in the OP, Provincial Policy and The Official Plan call for more density on transit lines.

The real problem is that everything is so subjective and easy to manipulate because there are competing policies and goals and planners or politicians can pick and choose based on biases, and on how they can twist or misinterpret everything to say black is white. planning staff write a report to “Advise” Council but ultimately they usurp power because they think themselves experts or “professionals” who know better… and Council is asleep at the wheel, unless a local Councillor (like Adam Vaughan) has a clue about planning.