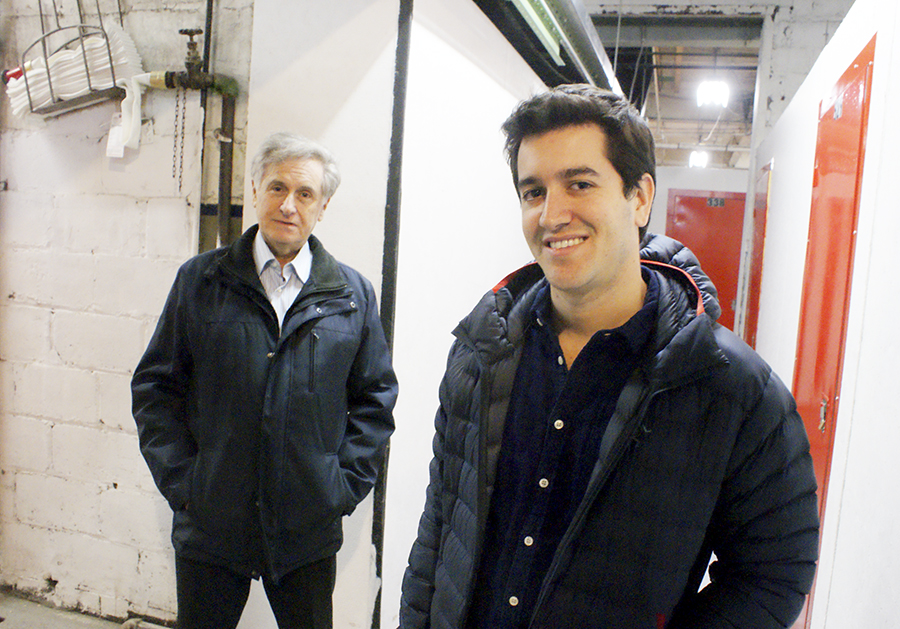 Peter and David Segal, father and son, inside the halls of their family business, Migson Storage. Photo: Anna Killen

Nearly 20 minutes into the pilot episode of the CBS police drama, Blue Bloods, a police car carrying two police officers and a kidnapping suspect screeches into a parking lot that, minus the excessive graffiti used to filth up the scene, would be familiar to anyone who regularly drives on Gerrard between Main Street and Victoria Park Avenue.

One of the police officers, played by a gruff Donnie Wahlberg, jumps out of the car and enters the building, revealing hallway upon hallway of identical storage locker doors. Key in hand, he finds the unit he needs, and opens it. To the audience’s relief, the missing little girl – in dire need of insulin, no less – is huddled in the corner, shaken but alive.

The high-intensity drama that played out during that scene is, of course, not real life at Migson Public Storage, where the scene was filmed.

But that doesn’t mean there isn’t a story behind the family-run business and industrial-looking property, which stands out in a sea of fresh townhouses and homes in the Upper Beach.

Owner Peter Segal and his son, David, who recently came on board as company vice president, run their storage business at five locations across Ontario, but it started right here in the Beach.

David’s maternal grandfather Joel Greisman became interested in re-purposing the warehouse property his father, Morris Greisman, first bought to house goods – mainly gloves and knitted wear from Japan – he was importing from the Far East beginning in the 1930s. Peter met Joel at an importer trade-show – and eventually married his daughter Susan.

“They were the biggest glove importer in the British Empire,” said David of his grandfather and great-grandfather, noting there was a time when wearing gloves every day and during many activities was the norm.

In the 1950s, the business sold its warehouse property (on Wellington Street where the TD Centre is now). Morris phoned Joel from overseas and asked, “Can you buy this building on Gerrard?”

The building operated as a warehouse for imported goods through the 1960s and ‘70s, and remnants of that time – conveyer belts, the office chandelier in one of the storage rooms – have remained on-site.

But more and more, the warehouse wasn’t being used to capacity. China’s cultural revolution meant that orders were being placed, but they weren’t being shipped.

“The whole country was going through a revolution,” said David.

That’s when discussions began about what to do with the property.

Around that time, in the early 1980s, David said his grandfather “was approached by a major storage company in the states to buy this building for a storage company, and he was like, ‘Oh that’s a pretty good idea.’”

“‘I’ll take the idea and run with it! Thank you for the idea,’” adds Peter.

And so Migson Public Storage – a play on the family import business name, M.I. Greisman & Son – was born, beginning with 10 units and expanding from there.

“At that time there was no storage, it wasn’t really a concept in Canada yet,” said David. “Storage was a nice short-term solution [to the empty warehouse]: we’ll put up 10 units. Then he realized he wasn’t going to wait for the importing goods to come back, this is a little more stable, and the community obviously wanted it because they were renting it out.”

The business grew over the years, but David and Peter say the Beach location is unique in many ways. The other locations are drive-up, for one, and the building itself, built more than 50 years ago, has its quirks.

“It’s not easy to build a storage facility,” said David. “And it’s expensive. Developers would rather build a fancy condo and take their money and run. Storage isn’t really sexy, developers don’t think of storage as a sexy, fun business to be in, but it really is a stable business that you can grow in and people always need it. People buy things and they don’t want to throw them out.”

The television show Storage Wars, which sees people bid on storage lockers that have been abandoned or confiscated, has brought more awareness to the storage industry.

“Any publicity is good publicity,” said Peter, adding that Migson uses an online auction service to sell off its abandoned units.

Like any business, there can be issues. While it hasn’t happened at the Gerrard location, sometimes desperate people try to live in the units or store illegal items.

“In this location we’ve been really lucky… we’ve never really had security issues,” said David. “Sometimes you’ll have a divorce, and the husband has the key to the wife’s things and maybe…”

“A lot of broken marriages end up in storage,” jokes Peter.

Jest aside, the Segal’s truly care about their customers. They say their job is to make their customers’ stressful transition periods easier – and that has a lot to do with their employees.

“Our manager has been working with us for over 30 years – he started with us when he was 21,” said David. “So we have a lot of long-term employees who have been here for so long, have great relationships with the customers, know the customers by name when they come in.”

Running a business for people in transition periods, however, means it is hard to predict.

“Demand goes up and down. It’s funny, it’s hard to find a pattern,” said David.

But even without a pattern, business is steady, if not always enthusiastic.

“People need it regardless of whether they’re doing well in life or not,” said David. “No one is ever like, ‘I can’t wait to move my things into storage and start the rest of my life!’ It’s always like, ‘Oh man I need storage.’”

“There’s families and stories in every one of these units,” he said.

I used to work for a company that rents a locker at the Beach location. I would drive through the area to get there and one day noticed how great the surrounding neighbourhood is and thought it would be a great place to live. We’re now going on 15 years in the Upper Beach, a stones throw from Migson.

I worked for Joel when he had the import business

Interesting article, especially since I had spent many years working in the office and showroom portion of that building. In the 70’s, I worked for Joel and Mr Sam Stark as an oversea garment buyer for over eight years.Thanks to Joel, I had an opportunity to travel the world. Out of interest regarding a former colleague, how is Paul Granatstein (?) doing? Ron Losinski

What keeps u occupied these days?