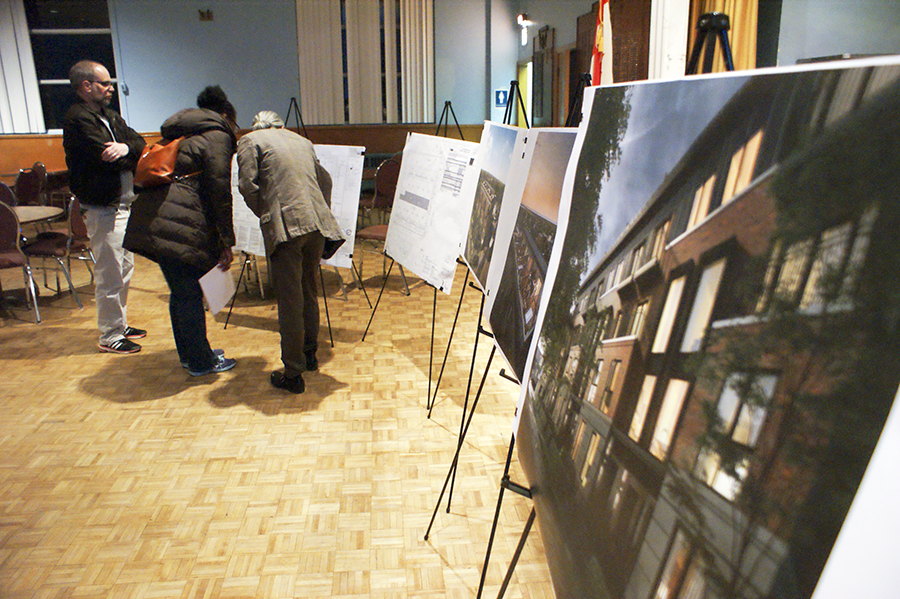 Plans for development at Dundas and Coxwell were unveiled at a community meeting Feb. 2, 2016. Anna Killen

A community consultation at the Branch 22 Royal Canadian Legion last week gave residents near Coxwell and Dundas a peek at an application for a townhouse development planned for that corner.

A dozen or so attendees viewed the plans, which revealed designs for a 22-unit, four-story development with underground parking at 96-104 Coxwell Ave., and had a chance to respond to city and development staff and planners regarding the project and proposed zoning changes to the area.

Those proposed changes include amending the allowed height – the building is designed to be a 17 m structure while the bylaw sets the maximum height at 12 m – and upping the allowed density, as well as lowering the amount of required parking spaces from 22 plus six visitor spaces to 20 in total. There is a proposed car share space, explained Toronto assistant planner Jason Tsang.

“The developer is anticipating some of the residents may use car share instead of owning a car,” he said.

Audience concerns ranged from issues with privacy (one man was concerned people would be able to view his backyard from their rooftop patio) and property access to the removal of parking spots while at the same time increasing density. One man who lives near the site told the developers that he would prefer to see commercial space in the bottom units, noting that is more in line with what he thinks the area needs.

“If I was going to blue sky this, I would ask you guys to put commercial back in on the bottom floor facing east,” said Nathanael Gray. “I’m just going to put that out there so you know what my dreams are and you guys can understand that’s what a resident perceives as being valuable to this intersection.”

The main point of contention appeared to be not the development’s size or design, but plans to take away a right-turn lane in front of the property and turn it into a rain-collecting plaza. The developer, Buena Vista Development, was asked by the city to incorporate the park into its design, as the park planning has been ongoing by the urban planning and transportation departments.

While several residents voiced concerns over the traffic changes, last week’s meeting was about the building design, not the plaza. Community consultation on the plaza and traffic changes took place last year, and the plan has already been approved by the city.