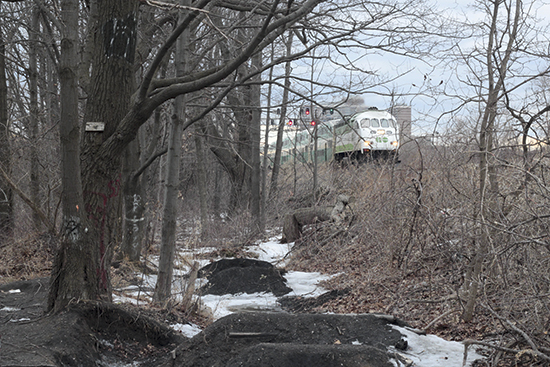 The section of the quarry lands that runs alongside the rail line will be part of new parkland. Photo: Andrew Hudson

Alan Burke will have to wait to find out if his bid to try to change the plans for the city-owned portion of the quarry lands east of Gerrard Street East and Victoria Park Avenue was accepted by the Ontario Municipal Board.

That’s because the OMB decided to reserve its decision on whether or not Burke and his East Beach Community Association – he is the president – can be granted an exception to participate in an upcoming appeal involving the development.

“They said at the most two weeks,” said Burke, noting that the Jan. 19 meeting with the OMB and lawyers for the BUILD Toronto development was “challenging.”

Burke wants to act as Bernadette Warren’s representative at the appeal of the ‘T’-shaped park surrounded by low-rise residential housing, alongside a big-box retailer at 411 Victoria Park Ave.

Warren presented a 550-signature petition at a Scarborough Community Council meeting asking for a higher percentage of park space, and was turned down.

Since Warren cannot represent herself at the OMB appeal, said Burke, the EBCA wants to have full status at the hearing on her behalf, and on behalf of residents concerned about the scope of the development, particularly the effect it will have on traffic in the area.

But because the EBCA did not present at the community council meeting, there is no grounds to allow them to participate in the hearing, and lawyers for the development presented submissions to that end.

Burke said it would be “unusual” for the OMB to grant him the exception, noting he could only find two similar cases to bolster his case.

“It would set a precedent,” he said.