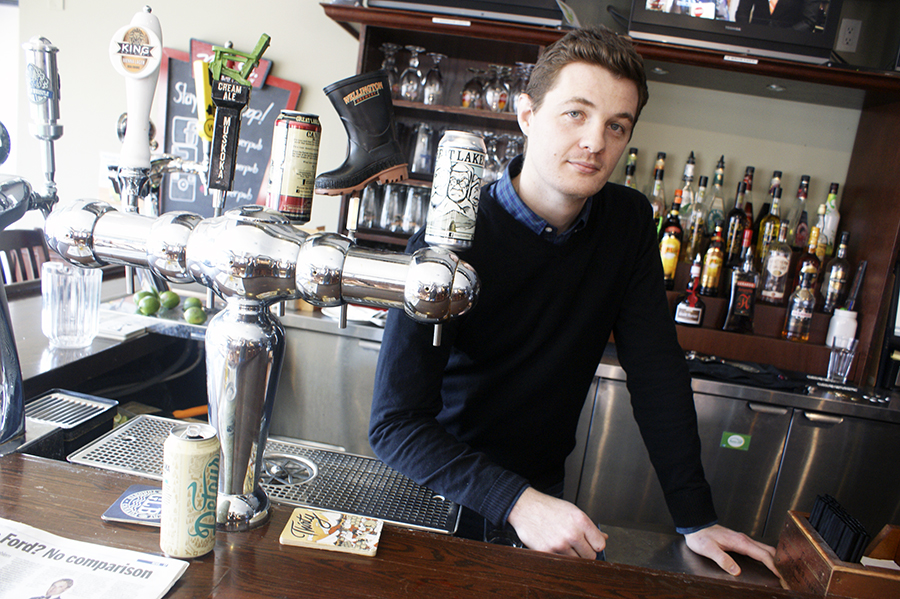 Jason Oosthuizen, who owns The Grover Pub on Kingston Road with his dad, said the new tipping regulations are a good idea. Anna Killen

News that a bill similar to the tipping bill Michael Prue championed for years will come into effect later this year has the former Beaches-East York NDP MPP feeling slightly shortchanged.

Working to regulate service industry tips and gratuities, mainly by making it illegal for employers to take all or a portion of employee tips, Bill 12 received royal assent late last year and will become law June 10. Bill 12 draws on similar bills introduced by Prue during his lengthy tenure in office. This bill, however, was introduced into the legislature by current Beaches-East York Liberal MPP Arthur Potts, who defeated Prue in the last provincial election.

Potts picked up the legislation as his first private member’s bill as an MPP, fulfilling a campaign promise he’d made at an all candidate’s meeting. Potts said he told Prue, “I have great respect for you. You’ve done some really great things. In fact, I really like your tipping bill. And if I should be so lucky as to get elected I’ll bring that bill back and I’ll get it through the house like you’ve tried to do three times.”

Potts said the previous minority Liberal legislature had amended Prue’s private member’s bill in committee, meaning he “inherited a fully solid bill to bring forward in my own name.” A restaurant owner himself, Potts said he was glad to see that all parties could work together to support this bill.

But Prue, speaking from his home in Amherstburg, said the bill in its current form doesn’t go as far as he had intended the three times he introduced the bill into the legislature as an opposition MP.

“There were a number of changes made that were totally unfair,” he said, highlighting the portion of the bill that allows restaurant owners to recoup merchant fees charged on gratuities paid by credit card.

“I think that’s a really retrograde step,” said Prue. “That wasn’t the intent in my bill at all, that the servers be responsible for the expenses of the owners.”

That being said, Prue said restaurant owners have come a long way since he first began working on this file nearly five years ago.

“In my initial conversations with restaurants, some of it was just horrendous,” he said. “’Don’t tell us how to run our business, this is a marginal business,’ they would say. ‘If we don’t have these tips we’ll lose our business.’ I told them you don’t deserve to stay in business. If the only reason they could survive was by stealing from their employees, it didn’t seem to me much of a business.”

Long-time beach resident Jason Oosthuizen, who, along with his father, is the new owner of the Grover Pub on Kingston Road at Main Street, said that the legislation is a good idea that won’t affect his restaurant.

“It’s not something that really affects us because we don’t collect tips from the staff, we never have,” he said. “But a number of other restaurants do do this, and from my own experience in the restaurant industry before I was here, I was forced to do that as a server.”

Oosthuizen doesn’t understand the push back from some in the restaurant industry.

“It would surprise me that restaurants do it in the first place, it’s part of the server’s salary, they’re providing an experience and often they’re tipped for the experience they provide, and their personalities and all of these things, so I don’t think that we’d be entitled to any of that.”