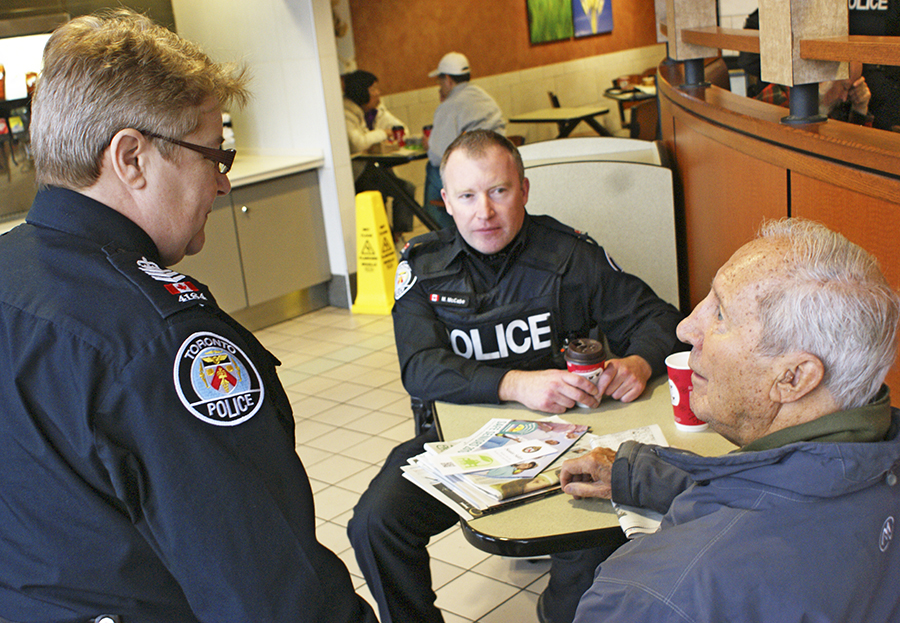 Ninety-two-year-old Beacher Ray Wilkinson, right, chats with 41 Division staff sergeant Debra Houston and crime prevention officer Mark McCabe during "Coffee with a Cop", Friday, December 18 at the Gerrard East and Victoria Park McDonald's. "[It’s nice that the police] take an interest in the community," said Wilkinson. "That’s needed, eh? Instead of being enemies of each other, treat them as friends - before they arrest you,” he added. Anna Killen

“I thought it was unusual.”

That’s how 92-year-old Beacher Ray Wilkinson described the sight inside the McDonald’s on Gerrard Street East at Victoria Park Avenue last Friday morning. The busy fast food restaurant was teeming with police officers – and, at first, bewildered-looking customers wondering why the police were hanging about.

But the 41 Division five-O weren’t there to catch the Hamburglar, they were there as part of a new East End initiative called “Coffee with a Cop”. The program – the first of its kind in Toronto – sees police officers set up shop inside an already well-populated meeting place (a coffee shop or fast food restaurant, for example) for a few hours each month to have a coffee and casually chat with local residents in an effort to build trust and hear community concerns.

“The idea is to go where the people are,” said 34-year-veteran officer Nick Nisavic, speaking from his post at a table surrounded by pamphlets and informational calendars. He said the division had hosted town halls at community centres, but found very few people showed up. At other community meetings and presentations, people might be in the audience and take in the information, but be too shy to speak up in front of a group about other concerns and questions they might have. And while they might have concerns, they don’t necessarily want to call 911 or might feel intimidated going into a police station.

“We were looking for different ways to engage the community,” he said. After some online research, he found a program in California (“Coffee with a Cop”) that piqued his interest. He phoned the program’s coordinators and asked if he could launch a similar program here, and was given the go-ahead. After clearing it with his supervisors, the goal is to host an event a month, with the first event taking place in November. Nisavic noted that there was a line-up of people waiting at the initial event’s launch.

Friday’s event was slower on the uptake, but an hour into the coffee date several booths and corners of the restaurant featured rapt conversations between officers and regular people.

One of those conversation was between McCabe and Wilkinson, with McCabe giving the 92-year-old the goods on “crimes of distraction”. A crime of distraction is when, for example, a thief will approach a potential victim at an ATM, drop something on the ground beside them, and then when the victim looks up, quickly grab the money as it comes out of the machine.

“The timing is just perfect to get your cash,” said McCabe. “We’re just saying to protect your personal space.”

But he did like that the “unusual” event reminded him of growing up in London, when he and his mates were told it was good practice to approach police officers – if they saw a crime, or just needed to know the time.

“When we were in school we were always told to report anything to the police, and if you ever want to know the time, ask a copper,” he said.

Decades later and well across the pond, that’s essentially the feeling McCabe and his officers are attempting to cultivate with these coffee dates.

“We’re not doing a specific presentation, we’re here just to answer any questions that people have,” said McCabe. “It’s to build up the comfort level — we’re approachable, they can trust us.” Another factor is that when community members run into an officer on duty, they’re usually running from radio call to radio call and don’t have the time to stop and chat. “So this time we’re making the point of stopping and chatting — that’s what it’s all about, communication.”

And if the positive reaction is any indication, it’s possible this program will move to other divisions in the GTA.

“I think other divisions will catch on,” he said.