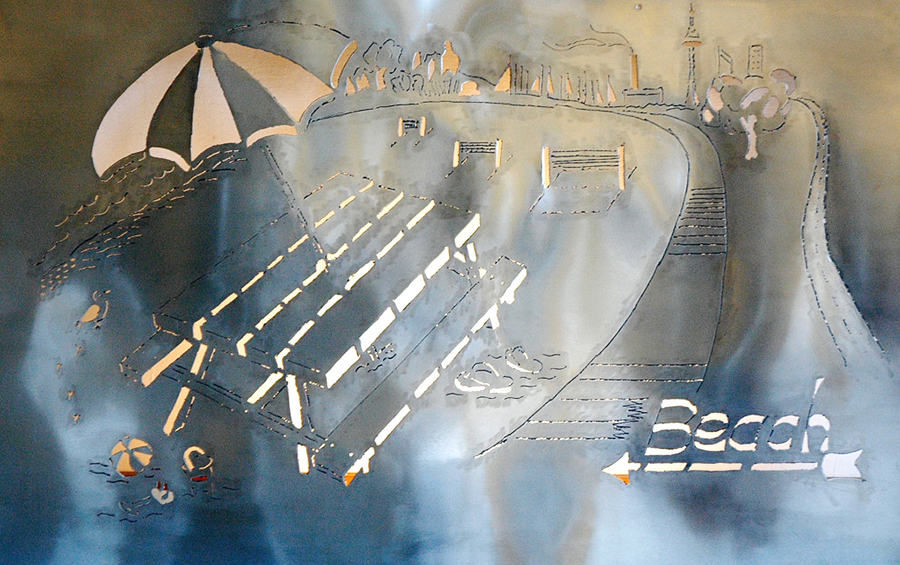 Leuty and Violet Avenue residents have increased their goal for this year’s DailyFlag for DailyBread campaign.

For the fifth year, neighbours on the street will reveal a new homemade flag each day leading up to Christmas, auctioning the creations to raise money for the food bank.

The goal for this year’s neighbour-run artistic advent calendar is $27,000, along with food donations collected at Fire Station 227 at Queen Street and Woodbine Avenue.

Ben Hilliard, who organizes the event with Michelynn Laflèche, spoke to Beach Metro News on Dec. 3. Already there were $1,900 in donations and $6,000 in pledges, he said, and bids for the three flags revealed by Dec. 11 were in the hundreds of dollars each.

Last year the neighbours surpassed their goal, raising $26,400 through flag auction sales and donations from businesses and individuals.

That amount covered more than 1,000 food hampers at Daily Bread, with each hamper covering about three days of food for a family of four.

Daily Flag for Daily Bread was launched on the evening of Dec. 6, when Hilliard said Daily Bread executive director Gail Nyberg was on hand to explain the value of monetary donations to the food bank. While canned food drives are helpful, Daily Bread’s buying power means a $100 donation pays for $500 of food.

The flags revealed by Dec. 10 this year already covered a variety of subjects, mediums, and interpretations of what makes a flag.

“There’s a good injection of new ideas every year, and there’s some weird and wonderful ideas, too,” said Hilliard, pointing to past examples running the gamut from traditional flags to an ornament made from an old exercise ball.

Hilliard’s abstracted division sign, painted on canvas, kicked off the campaign at 60 Leuty. Shraddha, Lincoln, Gayatri and Ira collaborated on a Warhol-inspired felted flag at 14 Leuty, featuring four similar colourful images of a child eating soup. Other ‘flags’ include a burned image of a pine tree on wood, a stained glass panel, and a flag with eight maple leaves attached to a clothesline.

Along with raising money and food donations for Daily Bread, Hilliard said the neighbours have spent the last five holiday seasons building more than just a pile of non-perishable food.

“It’s been a great community-building event,” he said. “It was always a very good community down here, but perhaps it’s been made stronger.”

This is the year to take a stroll through one of the more original fundraisers in the East End. 2015 may (or may not) be the final year for the campaign – Hilliard and Laflèche hope to hand off the idea to one of their neighbours, in the hopes fresh blood might also bring in some fresh ideas.

To check out the latest flags and make a bid, visit dailyflagfordailybread.com. To see the flags in person, take a walk down Leuty and Violet, and bring some food to drop off at the fire station.