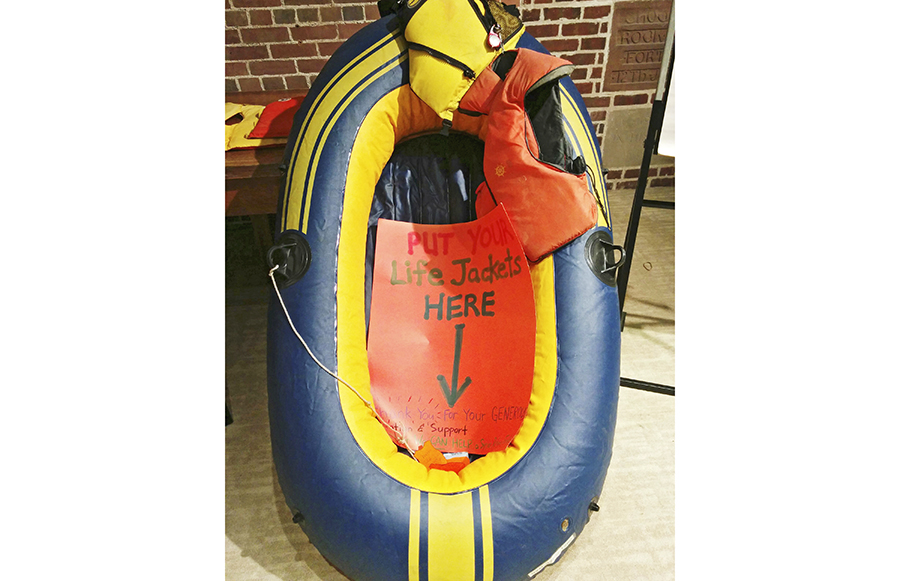 'Lifejacket' pledges dropped in this lifeboat at a November fundraiser totaled about $36,000. The event was put on by a group from Beach United and St. Aidan's Anglican churches to privately sponsor a Syrian refugee family. PHOTO: Submitted

A man throws a birthday party and instead of gifts or cards, his guests bring money for a family of Syrian refugees.

A pair of Beach churches host a sold-out dinner with a live band, history talks, and a ‘lifeboat’ that fills with $36,000 in pledges.

Moved by the news and by stories he heard from Syrians who fled to Cairo, an Upper Beach pharmacist offers free counselling and medications at cost.

Whether the efforts are big or small, many East Enders are finding ways to welcome refugees fleeing the civil war in Syria.

“It’s amazing that the majority of people coming forward to help have never lived in the Middle East, and probably don’t know that much about it,” says pharmacist Kyro Nagib, who owns the Pharmasave on Kingston Road.

“But they know there are people in need.”

In 2011, Nagib was studying in Cairo during what he calls the “boiling ground” of the revolution in Egypt, which was quickly followed in Syria by the street protests and violent crackdowns that sparked the ongoing war.

Others are joining the growing list of groups preparing to privately sponsor a Syrian family for their first year here.

At least nine have started between the Beach and Danforth East, each making a binding promise to provide support that, in most cases, means raising over $30,000 for a family of four.

Elizabeth Dove is with DECA Connects, part of the Danforth East Community Association.

Shaken by what her eight-year-old calls “the picture of the boy on the beach,” Dove said DECA Connects chose to expand its mandate of highlighting local social issues.

“For the moment, we’re putting local aside,” she said.

Besides, she added, so many local people were moved by the September photo of drowned three-year-old Alan Kurdi, the pressure to act is coming right from the neighbourhood.

On Dec. 5, Dove will join a DECA Connects benefit called Sleep Out for Syrians – a sub-zero night of sleeping in tents by the Church of the Resurrection, known as ‘The Rez’, on Woodbine Avenue.

Each of the 30 tents will raise at least $250 towards a campaign by The Neighourhood Group to sponsor two Syrian families.

But before Dove and others cocoon in their sleeping bags, they will join a pre-sleep “fireside” party to benefit another sponsorship campaign by The Rez. The party will include a traditional Afghani dinner that happens to be cooked by a former refugee.

Rossalyn Day is part of the Rez group and, like many, new to private refugee sponsorship.

“It was a revelation to me,” she said. “It’s a privilege to be able to do this.”

Until recently, she didn’t realize that private citizens, as well as settlement agencies, could sponsor refugees – a uniquely Canadian approach when it began in the 1970s.

Having worked for 11 years as a support worker in Kazakhstan, where she mostly helped teenagers who were aging out of state-run orphanages, Day has some insight into the challenges ahead.

“How do you help people in a way that maintains their dignity, and their choice?” she asked, adding that language barriers can exacerbate the issue.

“It can be a daunting process, but it’s something you walk through step by step.”

“I feel very impatient,” said DeGraaf, who started Upper Beaches Lifeline Syria, a group of 10 core sponsors and 40 supporters who met on a community Facebook page.

“But in two months, we’ve done all this,” she said, noting that the group has so far raised $12,000 towards its $30,000 goal. They are publishing a crowd-sourced cookbook, running a prize draw for donors, and planning to link with an established settlement group by Christmas.

“It’s all strangers, but we’ve all gotten to know each other,” she said.

“That’s the best thing about it.”