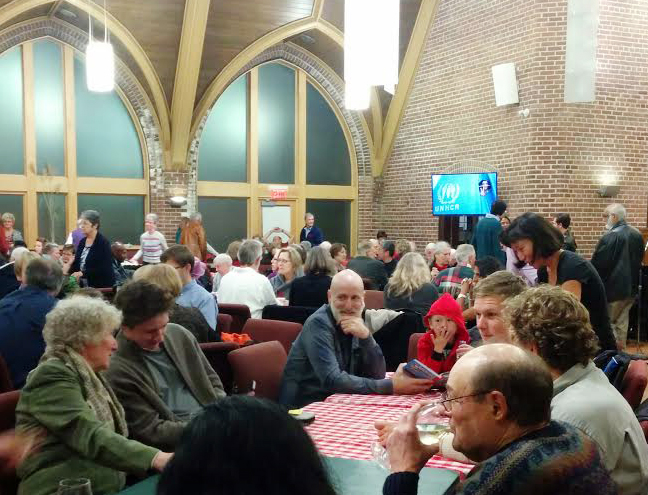 Volunteer groups across the East End are fundraising as they get ready to sponsor families of refugees fleeing the Syrian civil war. Most groups have set an initial goal of between $30,000 and $40,000, enough to support a family of four in Toronto for a year.

The following is an updated list of local sponsorship groups and upcoming events.

To add a group or an event, email jon@beachmetro.com.

With five members each from Beach United, St. Aidan’s and the community at large, this sponsorship group hosted a sold-out fundraising dinner in November.

A group of friends from across Toronto, the EWRC publishes a blog and has a fact sheet for anyone looking to help out.

Church of the Resurrection (‘The Rez’)

Donations to the The Rez’ refugee sponsorship group can be made using its Canada Helps page. On Dec. 5, the Woodbine and Danforth Avenue church hosted Sleep Out for Syrians, an overnight camping fundraiser organized by the Danforth East Community Association to support sponsorships by The Rez and The Neighourhood Group.

A group of five Gerrard India Bazaar-area families are raising money to sponsor a family. Donation link through the group’s Facebook page, or contact eastend.neighbours@gmail.com.

A community service agency that includes Neighbourhood Link, the Neighbourhood Group is accepting donations  towards its campaign to sponsor two refugee families on its Canada Helps page and has campaign updates available on Facebook.

The congregation at NUUC has a long history of supporting refugees, and the church is a member of the East End Refugee Committee.

Until Dec. 18, this Upper Beach group is taking orders for $10 boxes of homemade cookies at upperbeacheslifelinesyria@gmail.com.

Started by Upper Beachers who met on a neighbourhood Facebook page, they are also running a prize draw, and preparing to publish a crowd-sourced cookbook called Cooking from the Community Cupboard.

Donations can be made using the email address above, and the group has an active Facebook page.