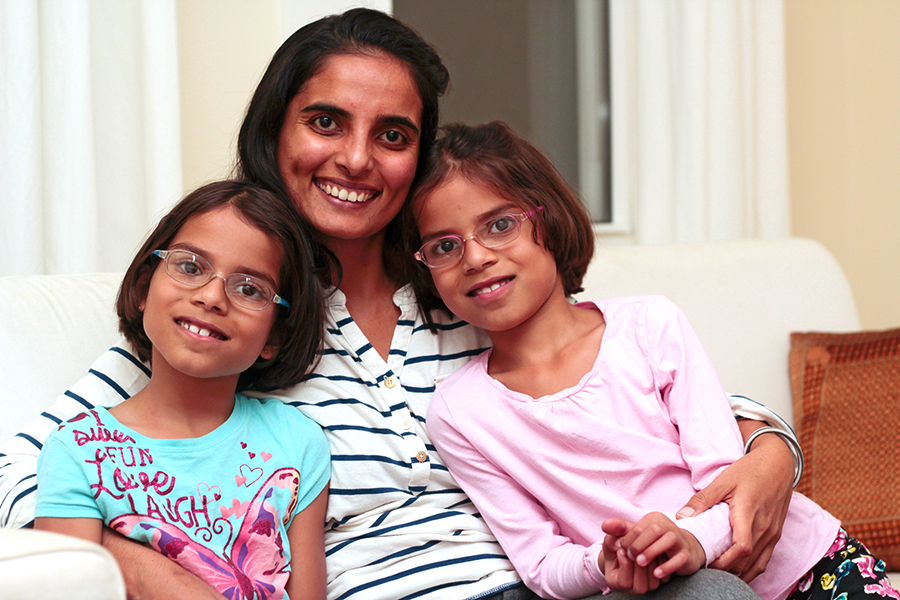 A scientist, dancer, Beacher, and mother to seven-year-old twins Niharika, left, and Nivedita, right, Niyati Desai-Kadakia is also working on her third children’s book after self-publishing two titles for children ages three to five, ‘Where’s my Grandma?’ and ‘There is Roti in My Lunchbox,’ which explore the sometimes tricky cross-cultural questions posed by children growing up in a family that has wheels on its feet. Both titles are available at Ella Minnow Children’s Bookstore on Kingston Road, as well as on Amazon.
PHOTO: Andrew Hudson

One day, when Nivedita and Niharika were still new to eating lunch at school, the girls asked their mom to come up with another word for “roti.”

The question caught Niyati Desai-Kadakia a bit off-guard. Growing up in Baroda, India, everyone knew what roti was.

Not only that, but Niyati’s own school lunches had always come from a cafeteria.

So Niyati never had a lunchbox, or an awkward lunchbox moment – the one when you pop the lid and everyone says your lunch is weird.

But Niyati figured out what happened, and gave the girls an answer: “How about we call it crêpes?”

After that talk came several other fancy French words for the girls’ Indian food lunches, before they briefly insisted on hot dogs and then finally, after a chat, agreed to simply call roti what it was.

Those exchanges inspired Niyati’s picture book, There is Roti in my Lunchbox, her follow-up to Where is my Grandma?

Both self-published books explore what Niyati and her husband learned after moving with their twin daughters from Philadelphia to Mumbai to the Beach – moving across cultures  can invite a lot of questions for a young family, and the answers are rarely clear-cut.

“It’s human nature to put someone in a box – it simplifies things,” says Niyati, speaking at home while the twins draw their own stories and puzzle over homework from Balmy Beach school.

“I think parents need to move beyond that, and not be pegged into one culture or another.”

Although she grew up in a large, traditional family in Baroda, at 18 she insisted on going to college in California, mainly so she could do a dual degree: biochemical engineering and Asian-American literature.

A fan of Rohinton Mistry and Vikram Seth, both cross-cultural writers, Niyati was also, in 1996, one of very few girls in her engineering classes.

On top of that, studying in mid-1990s California gave Niyati a huge tech jump on her family back in India.

“Email was there, but it was just coming out,” she said, laughing.

“I would still write letters home, which now sounds ancient.”

And after finishing her first two degrees, Niyati stepped off her expected career track – the one she would eventually follow to immunoassays, drug discovery research, and Alzheimer’s imaging  – so she could go back to India for a year of intensive training in classical dance.

“It was a leap of faith, because I wanted to finish my graduate studies,” she said. “But I knew I would regret it if I didn’t do it.”

For a year, Niyati woke at 4:30 a.m. to train with Chandrasekhar – a renowned dancer who was later awarded the Padma Bhushan, a national honour. She also helped him open his first Hotmail account.

Dance was a devotional pursuit, Niyati says, and it taught her more about hard work, respect, and failure than any academic essays or lab research.

But after earning her ability to teach dance professionally – a step that meant giving a four-hour final performance – Niyati returned to the US to pick up where she left off.

She met her husband, or rather discovered that her long-time friend was the reason none of her mother’s matchmaking made any sense, and for a while they settled near San Francisco Bay.

In 2009, they decided to try and return to India, some 15 years since they had both left to study in the US.

“We were in the thick of things,” she said. “Then we realized that everything was just the same, but we had changed so much it was difficult to go back to what we were.”

They missed camping in wide-open places like Yosemite and Tahoe, or the road trips up to Vancouver and Toronto.

When an opportunity came for her husband to do an MBA in Philadelphia, they took it, and that’s where Nivedita and Niharika were born. Another year later, and they were living at Yonge and Bloor.

“We had heard a lot of good things about Toronto,” Niyati explained. “Our idea of Canada was it’s an amazing place for families – that’s what we kept hearing.”

After realizing that living with construction noise from the 76-storey One Bloor condo was atypical even for Toronto, they moved again in 2012, but this time, only as far as the Beach, where the twins would start kindergarten.

Niyati’s parents have a word for her in Gujarati, one that roughly translates to having wheels on your feet.

“We don’t identify with one single place,” she said, nor does she want her daughters to.

Where’s my Grandma? was born out of the girls’ first big identity questions. Why were their grandparents so far away, where they had to Skype them every week instead of having them over?

Niyati says Nivedita and Niharika were among the book’s keenest editors, picking up two typos even she didn’t see. And after it was published, they became her top sales people, giving a successful elevator pitch at a bookshop in San Francisco.

“It became a family thing,” said Niyati. “I was very proud of that. It filled my purpose, my personal purpose.”

If imitation is the highest form of flattery, it’s clear that the girls are big fans of their mom’s books. Both are busy drawing series of their own, with titles like Ava Plays Soccer and India to the USA.

The characters in her daughters’ books, and Niyati herself, can’t sum up their identities in a single pursuit any more than Nivedita and Niharika can say where they are form in a one-word answer.

“A lot of times, we ask kids, ‘What do you want to be when you grow up?” Niyati said, smiling.

“I would never ask that of a kid, because then you have to choose.”