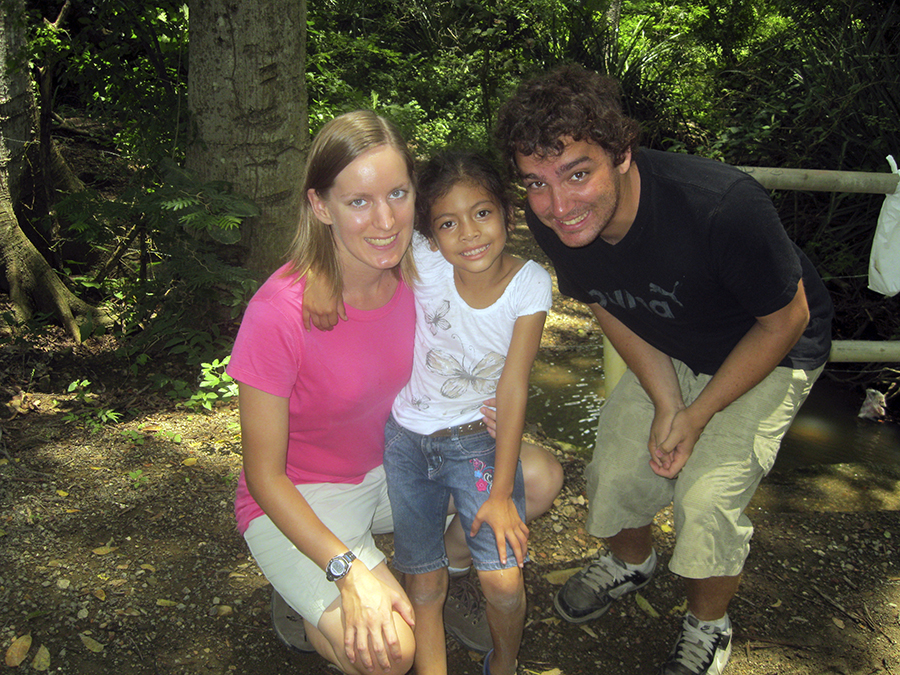 Kerry Munro, left, travelled to Costa Rica with Patrick Erskine, right, and other members of Forward Baptist Church to help rebuild a basketball court on the island of Chira. The live-in residential project was one of five tasks that Munro completed before her 25th birthday to earn the gold Duke of Edinburgh's Award.
PHOTO: Submitted

A few weeks ago, Kerry Munro earned a gold medal from a prince.

To win that medal – the highest Duke of Edinburgh’s Award – Munro woke by rooster in Costa Rica, raced a Laser sailboat on Lake Ontario, and made snacks for people learning to paint in Regent Park.

Munro had five tasks on her quest for gold, and for an Upper Beach girl who grew up swimming and sailing with the sea cadets, none was as daunting as her ‘Adventurous Journey’ – a 70 km hike through Algonquin Park.

Other hikers on the trip wore head nets, she said, but that didn’t stop the late May mosquitoes.

“I like camping, but I had a fear of walking 70-plus kilometres,” she said. “There’s bugs, there’s the weather, there’s the fear that in the middle of the night you’re going to be cold.”

But Munro pushed herself, and her trip diary details the happy results – all the birds she saw, the bits of Mandarin she learned from fellow hikers, the lakeside sunrise she enjoyed all by herself.

Open to youth ages 14 to 25, the gold Duke of Edinburgh’s Award goes to those who excel in community service, learn a new skill, finish a live-in volunteer project, take up physical recreation and complete a four-day journey.

Munro actually finished her five tasks in 2011, when she was 25, but only received her award on Oct. 27, in a ceremony led by Prince Edward, Earl of Wessex.

Today, she remains involved with the Duke of Edinburgh’s award by reading quest logs written by the next batch of youth seeking a medal.

Munro also continues to volunteer at ArtHeart, a drop-in visual arts program in Regent Park, years after she earned her award.

“I actually enjoy volunteering,” she said. “It’s not only something to put on a résumé, but something that I can tell people, ‘I did this.’”

For her live-in volunteer project, Munro travelled a lot farther than Dundas and Parliament – she and fellow members of Forward Baptist Church flew to Chira, an island where some 3,000 people live mainly by fishing and farming off the Costa Rican coast.

Met by hot tropical air on the tarmac in San José, the group went to Chira to help build a basketball court.

They did the work by hand, sifting sand to make their own cement and then laying it out by shovel.

Munro stayed with a young family who kept chickens and, thanks to their five year-old daughter and a rooster named Loco, she never missed a morning of work.

“To wake me up, she brought the rooster into my room and put it at the foot of my bed,” she said, and the bird lived up to his name.

“He went nuts,” she said, laughing.

Earning a Duke of Edinburgh’s Award propelled Munro to new places and new challenges, but it also confirmed a lesson she first learned when her dad encouraged her to join Sea Cadets at 13 – a path she followed right up she was a civilian cadet instructor and a Chief Petty Officer, First Class.

“It doesn’t matter if you don’t come first,” she said. “Just have fun.”