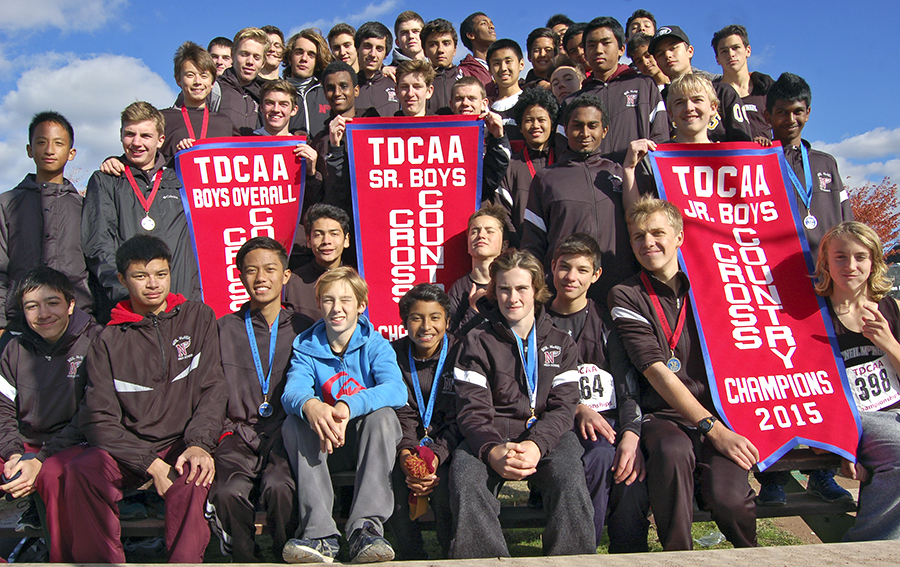 Cross-country runners from Neil McNeil High School celebrate after winning the overall boys' title at the TDCAA city championships at Centennial Park on Oct. 30. The win marked the eighth straight banner for the varsity running team, who train five days a week as soon as the school year begins.
PHOTO: Submitted

But after winning their eighth straight city final in October, Neil runners say there’s more to their success than elevation gains.

“You push each other,” said Andrew Alexander, a Grade 11 student who finished 7th in Ontario when the team ran the Nov. 7 OFSAA championship at the Highlands Nordic ski centre south of Collingwood.

With 45 runners – the school’s biggest team in years – Alexander said everyone has a teammate who can match his pace, then raise it.

Unlike track and field, which many of the Neil runners do in spring and summer, Wood said everyone in the same age group runs the exact same course and distance.

“Everybody understands what each teammate is going through.”

At the OFSAA race, that meant five to seven kilometres of mud, hills, even hail.

“It was a very lonely course, too,” said Ben Ing, also in Grade 11. “Spectators only saw you at the beginning and the end, because it was all through the woods.

“Most of it was uphill, just the last kilometre is downhill, and finally seeing people again felt really good.”

For Bemrich Ayuson and Neil’s other Grade 9 runners, the OFSAA race saw a happy end to a year-long rivalry with Chaminade College, who beat Neil’s Grade 9s in a September invitational, then tied them in points at the city final. But in the muddy provincial race, Neil outran Chaminade by a long shot.

Likewise, at the senior level, Neil’s Grade 11 and 12 runners have been trading OFSAA wins with their counterparts from Father John Redmond for the last three years.

This year, Neil’s senior team bested them at the city final and at OFSAA, though it was Birchmount Park Collegiate that won Ontario’s senior boys’ title.

The way cross-country races are scored, points go to the school’s top four runners but everyone counts – runners who finish fifth or later can still defend against other schools in the final ranking.

“We’re one of the sports where we don’t have to cut anyone,” said Wood. “If you want to come every single day and want to work hard, regardless of your ability, you’ve got a spot on our team.”