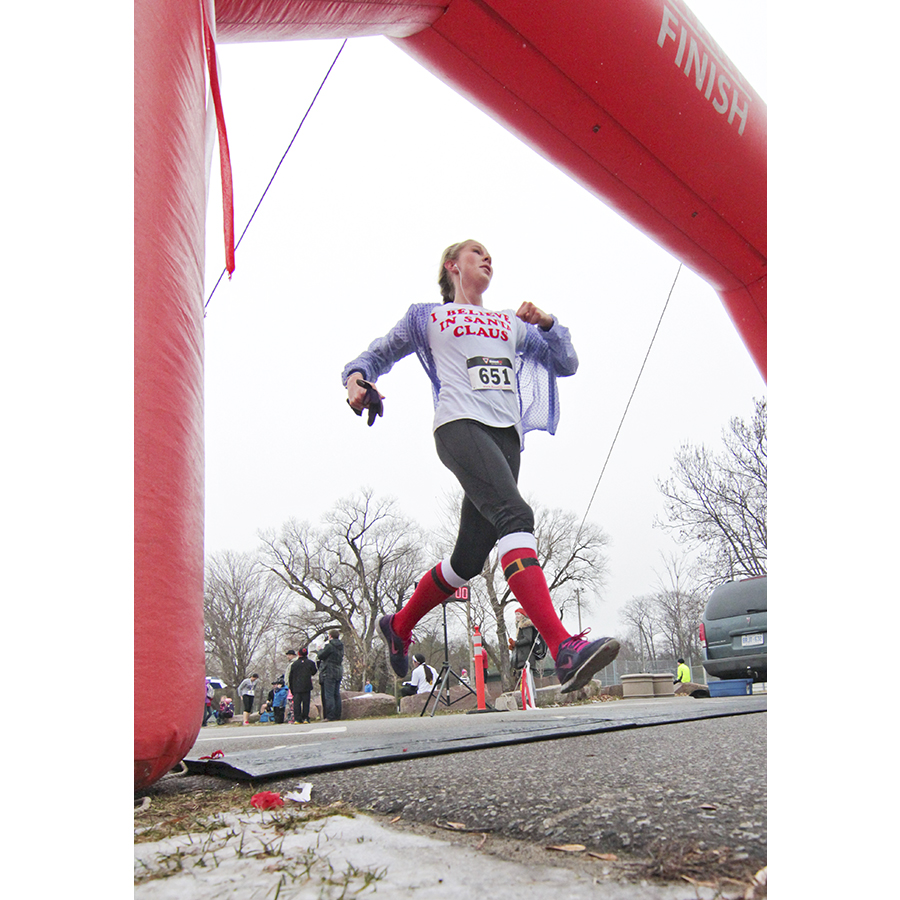 A runner flies over the finish at the 2013 Tannenbaum 10 k race.
PHOTO: Beach Metro News

It grows every winter, and so do the gifts that surround it.

As the Tannenbaum 10k nears its 10th anniversary on Dec. 6, local volunteers are thrilled that over 800 runners have warmed to the December race, and that the benefit run raises some $15,000 a year for Community Centre 55’s Share A Christmas campaign.

Rina Kang says she and fellow running instructor Janice Tripp had no idea how the Tannenbaum might grow when they started it as a goal race for their 10k running classes back in 2005.

But a decade later, Kang knows why so many East End runners enjoy racing from Kew Beach to Tommy Thompson Park at a time when most Torontonians are putting on snow tires, not running shoes.

“You feel like you’re running in your own backyard,” said Kang.

“When it’s so local, your support team just rolls out of bed, coffee in hand, and they’re there for you,” she added. “It’s like having your own personal cheering squad the entire way.”

Originally held the third week of December, the Tannenbaum has since moved up a couple weeks, making it less likely runners will have to brave anything like the great blizzard run of 2007.

Everyone who ran the 2007 Tannenbaum is grinning wildly in the photos, Kang points out – never mind the snow drifts on the boardwalk, or the icicles hanging off their toques.

But for Dave Emilio, a marathoner and founder of the Toronto Beaches Runners Club, that race was the rare one when it was nice to stay in bed.

Emilio has had zero chance to snooze since, however, as he and other volunteers in the 200-member Beaches Runners Club started organizing the race five years ago.

“It’s always been a good race, run by runners,” he said.

There are always plenty of helpers on the course — last year’s “pace elves” were a big hit — plus music, food, medals, draw prizes, and a kit that includes gym bags or toques for runners who already have a zillion T-shirts.

Open to all ages, and to walkers as well as runners, this year’s Tannenbaum will kick off with the first-ever Superkids 1K – a fun run for children 12 and under that is $5 or free with a food donation to Centre 55.

Even Santa drops by, and proves surprisingly fast on his feet.

That may be magic, but the course is also quick, with few hills and no chance of overheating.

“It’s actually become known as a competitive race, as well as a fun race,” said Emilio, noting that it’s popular with track teams and other serious athletes.

Emilio welcomes those times, but is just as happy to have walkers finish the race at 1:45:00.

“It becomes a race where we’re just trying to make everyone happy,” he said.

“Whatever money we can raise for charity is a bonus for them.”

Visit www.tannenbaum10k.com for more information about the race or to register.