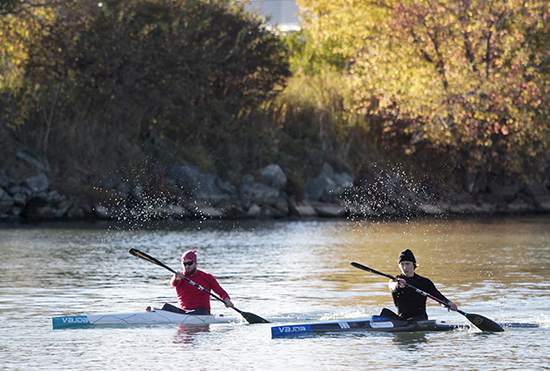 Someone had better shore up the medals table when Balmy Beach Canoe Club celebrates its season on Nov. 8.

The local canoe and kayak club won more medals than any other competing club at the national championships in Ottawa this August, a haul that included 11 gold, 18 silver and 25 bronze.

Balmy Beach also came third in the points race with a score 602, forcing paddlers from the much larger, higher-ranking Ottawa and Oakville clubs to look over their shoulders.

“My first year here we were getting like, 23 points,” said 20 year-old Conrad Hopp, one of five Beach kayakers who raced in the world junior and under-23 championships in Portugal this July.

With a dozen paddlers nominated to Team Ontario this year, and four more to the Paracanoe team, the club is clearly reaching a new depth of talent.

But the club’s most decorated athletes also show no signs of slowing down.

It was a special thing to race on home water in Welland, Ontario, said Fraser. Even though she has a half dozen World Cup medals to her name, it was the first time many of Fraser’s friends and family got to cheer her in person.

“I remember going off and it was just like tunnel vision,” said Fraser, recalling the quick lead they opened on the Cuban, Mexican and Argentinian teams that day, which had near-perfect weather.

Fraser began to hear the home crowd at the 200-metre mark, but “I didn’t know where we were at all at the end” she said, laughing at how zoned-in she was.

Watching Fraser lock-in that victory was a season highlight for fellow World Cup medalist and Balmy Beach kayaker Sam Roworth, but there were several more.

One was seeing Samantha Sula race two age categories up at nationals in the under-17 solo kayak 6 km.

“She beat some of the junior worlds competitors, which was really exciting to see,” he said.

Another was watching Balmy Beach give Oakville’s Burloak club a scare in the war canoe race at nationals.

Crewed by 14 paddlers and a coach who steers, war canoe is a true team event, and at nationals, Burloak has won it for nearly a decade straight.

That streak continued this year, but not before Balmy Beach pulled even with the formidable Oakville/Burlington club at the halfway mark.

“It was really tight this year,” said Roworth. “Usually the crews on either side of them end up being disqualified because the wake is so big off the back of their boat that they end up flying out of their lane.”

Given its growing success, due in no small part to the work of head coach Peter Martinek, Balmy Beach is drawing young athletes from across the GTA. Even members like KC Fraser and Conrad Hopp, who could train elsewhere, plan to spend as much training time as they can here on Ashbridges Bay and the Humber River.

“It’s definitely the best place to be in Canada I think,” said Hopp.